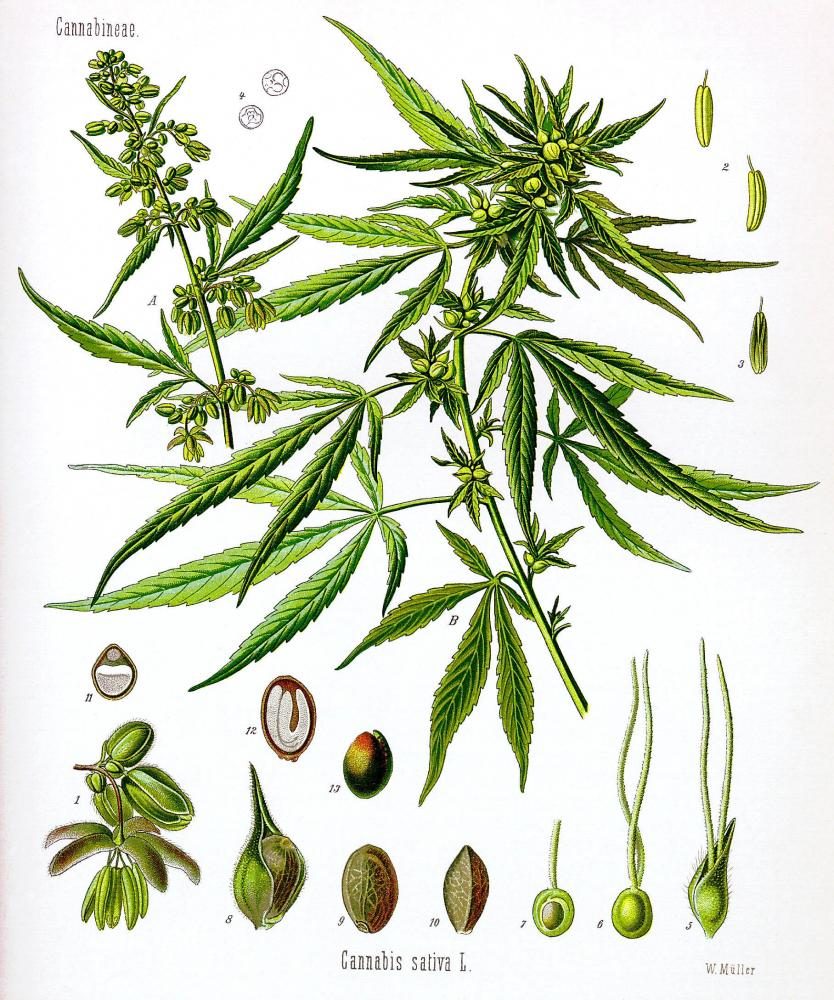 An illustration of a hemp plant depicted in various developmental stages from From Franz Eugen Köhler's Medizinal-Pflantzen.

Imagine having a chronic, debilitating disease and finally finding a medicine that alleviates your symptoms, only to find out it’s illegal at your university. This is the case for any student that suffers from one of the 37 plus diseases and conditions that medical marijuana can treat.

This week, The Daily Illini reported that Student Senator Tara Chattoraj has begun to push for University Housing to support the use of non-smoking medical marijuana in dorms and on campus. It is currently illegal for students to possess any type of marijuana product because the University is federally funded and marijuana possession is still a federal crime.

This means that the 7,707 people that legally can use medical marijuana in Illinois are inhibited by University rules and federal laws from alleviating the symptoms of their diseases and conditions. In other words, these individuals, if enrolled at the University, must choose between their education and suffering from illnesses such as Crohn’s disease, Tourette’s syndrome or epilepsy, among others.

It’s understandable that the University would be hesitant to allow students to possess marijuana in student housing due to the fear that unlicensed students would have access to it; however, there is sufficient evidence that shows the trend that, with the introduction of legalized marijuana, teen use has decreased.

This is exemplified by data from the National Survey of Drug Use and Health reporting a 12 percent decrease year-over-year in people in Colorado aged 12-17 after the legalization of marijuana in the state.

Similar statistically significant percentage drops were shown in other states which had legalized marijuana during that time. Considering that only 8.8 percent of medical marijuana applications in Illinois were submitted by users under 30 years old, allowing medical marijuana would not cause a hefty increase in users on campus, but it could dramatically help those who benefit from its effects.

Any concerns regarding fire hazards are immediately deemed illegitimate as the push is specifically for the use of non-smoking medical marijuana products.

Additionally, THC, the active compound in marijuana, is nearly impossible to overdose on considering the estimated fatal dose is between 15 and 70 grams and, according to the Colorado edibles dosing guidelines, most edibles contain five milligrams.

There is also ample evidence to suggest that only a very small amount of marijuana users develop a dependency, unlike other easily accessible, more dangerous drugs like opioids that can serve as “gateway drugs.”

Why is the University allowing for patients with prescriptions for harder, more addictive drugs such as Xanax and Adderall on campus — drugs that are well-known to be abused, specifically by college-aged students — while the less harmful, widely beneficial forms of marijuana are highly punishable?

There’s no doubt that marijuana is one of the most popularly consumed illegal drugs on college campuses; however, since there are far less harmful effects of cannabis, the University should shift its attention to cutting down on the abuse of real gateway drugs.

This isn’t to say that anti-anxiolytics and stimulant drugs should be banned altogether, but rather that the University implement awareness programs that explain the dangers of their misuse.

The combination of a strong alcohol presence on campus and ease of access to drugs like Alprazolam can easily result in death. Also, anti-anxiolytics and similar drugs have frequently been linked to sexual assault cases — another major issue on college campuses.

For a “drug” with effects as harmless and widely beneficial as medical marijuana, the answer seems simple: puff, puff, pass that law.