A call to disband fraternities and sororities 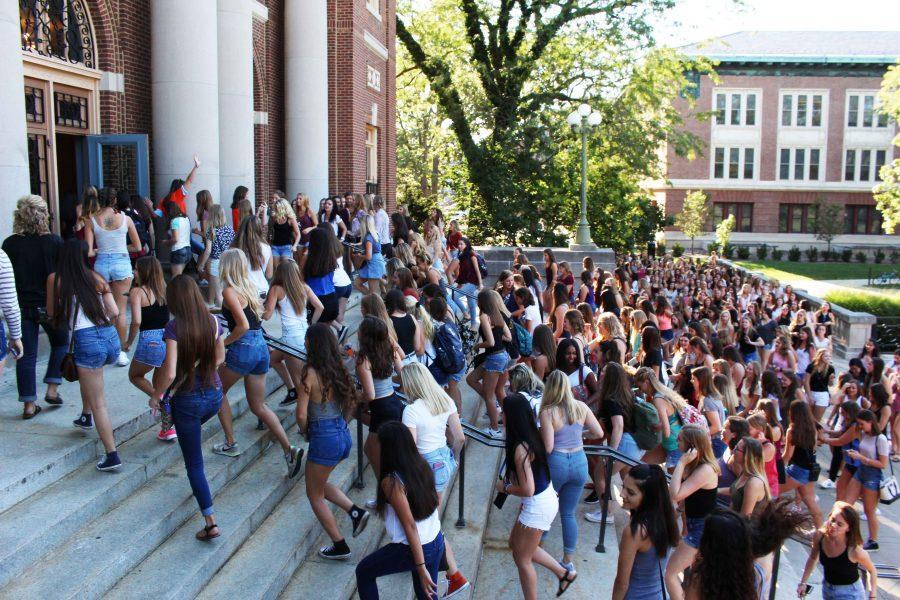 Potential new members head into Foellinger Auditorium to meet with their recruitment counselors before receiving their official sorority bids.

I’ll preface this by saying people should read this through its entirety, re-examine their own position and participation before wholly rejecting my opinion and dismissing me reactionarily. This is not meant to be a critique of individuals in Greek life, although accountability and resistance at the individual level is imperative.

Rather, I seek to critique and analyze structural occurrences and the viscerally racist, sexist and violent history of fraternities, to ultimately make a case to destroy the Greek system and the logic in which it is situated.

It is completely wishful thinking to imagine a world without sororities and fraternities, for now. What would it eventually look like? In this instance, abolishment does not mean an immediate destruction, but rather a gradual and progressive removal of a violent institution.

Author and lecturer Lawrence Ross, a member of Alpha Phi Alpha in 1985 at Berkeley, wrote about the history of fraternities in America. He posits that the very beginnings of fraternities were racist ones, where white men would separate themselves from students of colors, enabling elitist attitudes and demands for segregation to continue.

It is no surprise from there that incidents like hanging the confederate flag outside windows (Delta Chi fraternity), xenophobic and racist costumes (Alpha Phi sorority/Acacia fraternity) and perpetuation of rape culture occurs from these organizations. These are all products of a racist, sexist and discriminatory foundation.

I desire nothing more than the complete disbanding of fraternities and sororities. But that is not a reality that can be fulfilled within the status quo. Members of said organizations have invested so much money into the protection and preservation of their houses, having alumni donors bringing in millions of dollars to keep the institution going. They pride themselves in philanthropy, bringing friendships together and fostering an environment with leadership.

Admittedly, it is not hard to look past this when their racism is ubiquitous, blatant and ongoing. Most universities do little to nothing to recognize the systemic issues embedded into fraternities, habitually engaging in damage control: avert and minimize the risk, cut ties with the frat, find out names of students and then done. Sometimes, none of that is done because who would want to lose housing that the University does not have to pay for? In any case, there is no look into systemic racism.

The University needs to advocate for transparency of Greek life, and that can only be done when it prioritizes safety of its students over financial greed and image.

What can be done? The University should demand for more transparency of Greek life. What causes and organizations are they giving money to? Planned Parenthood? National Center for Transgender Equality? What is being done to destroy the hunting ground for sexual assaulters? With given permission from victims of sexual assault, could they release the names of abusers and rapists to keep students safe?

The University can do a lot more than what it’s doing right now and while these are changes that can be done within the system, the goal of abandoning fraternities as a whole should always be kept in mind.

Rubab is a sophomore in GWS.