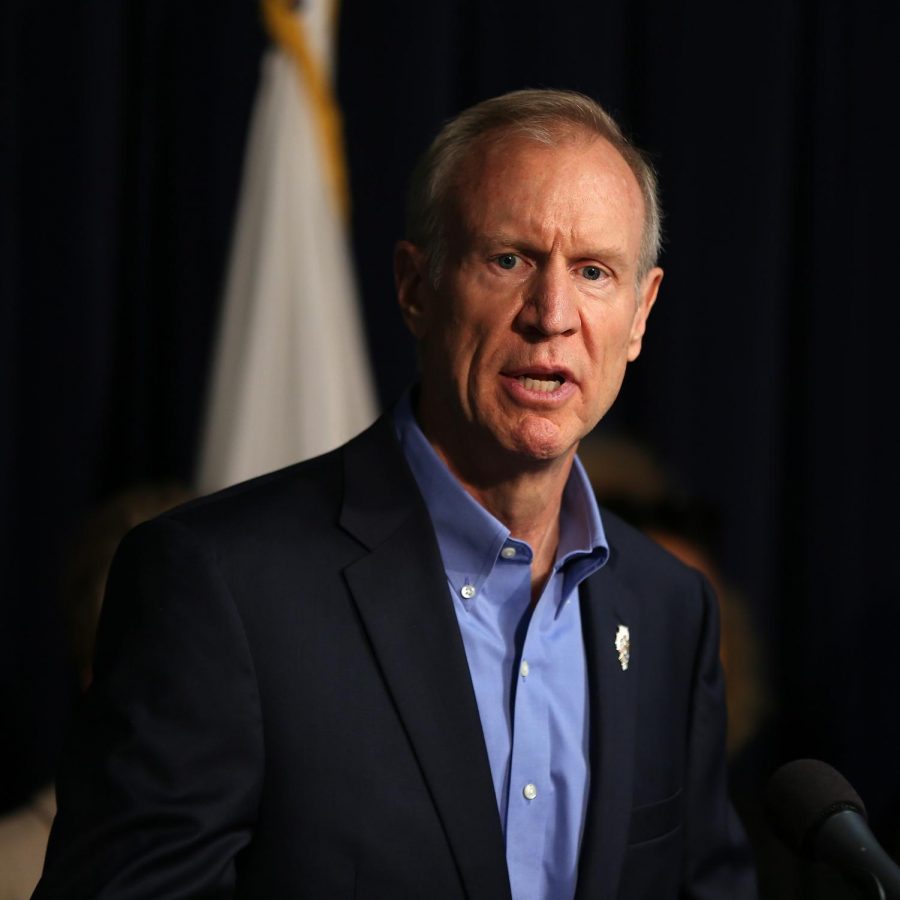 Illinois Gov. Bruce Rauner at a press conference in the State of Illinois Building in Chicago, Illinois on Sept. 28, 2017.

A couple weeks ago, there was a Letter to the Editor written by Kevin Sussman. Sussman advocates that Illinois’ problems need to look no further for solution, for we have our hero, current Governor Bruce Rauner, to fix the swelling problems in our home state.

Not only is it laughable in every sense of the word to call Governor Rauner the “savior of the state,” but the rationale for Sussman’s claim lacks political and historical understanding of the reality in Springfield. Governor Rauner has failed the people of Illinois by prioritizing a radical political agenda over pragmatic solutions.

Mr. Sussman claims “Rauner did not create the pension crisis.” This is true; however, insisting that Speaker of the House Michael Madigan and Democratic officials did shows a lack of historical understanding of the pension crisis. Luckily, I wrote a piece on why the pension crisis is in its current state. Ironically, to Sussman’s point of blame, the legislation that was most damning to the state was signed into law by Republican governors, one of which passed with a Republican-controlled senate.

Governor Rauner’s pension reform plan that Sussman mentions is actually a perversion of Senate President John Cullerton’s plan. To claim that Rauner crafted the plan himself is to pride the Governor for reinventing the wheel.

Further regarding pension reform, and noted in my aforementioned column, Democratic Governor Pat Quinn and the Democratic General Assembly tried to make monumental changes to the active pension benefits in 2013. It was struck down by the Illinois Supreme court due to the state constitution preventing any legislation from altering any active pension benefit plans. That’s something Governor Rauner legally can’t undo even if he had the support for it.

What is true is that Governor Rauner created a budget stalemate that lasted two and a half years. During this time, the state of Illinois accumulated as much as a $16 billion debt in unpaid bills and as a result almost downgraded to junk-bond status.

Of course, it should be noted that this was on purpose. Three months after his inauguration, the newly elected Governor sat down with the Chicago Tribune editorial board, claiming that “Crisis creates leverage to change. And we’ve got to use that leverage of the crisis to force structural change.”

And he certainly tried.

What people might not realize is that most of the budget is automated constitutionally. Two aspects that aren’t, however, are higher education and social services. Rauner believed these two sectors could be financially squeezed into submission, causing enough pressure that would either make the Democratic politicians fold, or turn the Democratic-heavy sectors Republican come voting season.

While Governor Rauner is not incorrect in understanding this philosophy, as he is hardly the first politician to use it, he didn’t seem to understand the amount of suffering that would go along with it — or he didn’t care.

During the two-and-a-half-year budget stalemate, inner city after-school programs were stopped, mental health and rehabilitation facilities, which save the state costs in the long run, were closed and higher education funding was slashed heavily — so much so that some universities were on the verge of shutting down, causing incredible detriment to the communities and the students within them. Even when Democrats formulated a budget that heavily reduced spending to levels Rauner desired, the Governor, being fully aware that more revenue was needed for the state’s fiscal stability, did not hesitate to veto it.

This is all a part of Governor Rauner’s strategy to paint Chicago as the evil empire of Illinois, to say that’s where all your hard-earned tax dollars are going, and it’s all thanks to one person — Speaker of the House Michael Madigan. This narrative is incredibly effective as Mike Madigan became a notorious household name in the state of Illinois.

However, this narrative is disingenuous, as Chicago is the economic backbone of this state. The economic reality is that downstate counties receive more tax dollar assistance relative to their economic output, while Cook County actually receives less. Madigan himself is a column for another time.

Governor Rauner’s failing strategy was perfectly represented during the debate over Senate Bill 1, which overhauled the worst-funded school system in America to a fairer, redistributive system. Rauner initially called the bill a “Chicago bailout” regarding underfunded pensions, because on paper, Chicago Public Schools would receive the most money.

The Better Government Organization, a non-partisan government watchdog group, fact checked the Governor’s claim and found it to be blatantly false. The ironic climax of the the whole standoff was when Rauner decided to sign the bill, then claim it as a monumental victory for the children of Illinois. The only difference between the “bailout” bill and the one signed was a $75 million, tax credit based, school choice scholarship program.

As Sussman points out, Governor Rauner also campaigned against the Democrats gerrymandering Illinois. But if we look at the actual math behind evaluating gerrymandered states, Illinois is one of the most evenly competitive states in the Union, and substantially more competitive than its neighbors. Its efficacy gap for the State House slightly favors Republicans, and the broad voting percentages have been proportional to the state legislature outcomes. Governor Rauner and Sussman fall flat here.

For Sussman, in defense of Governor Rauner, to call out Madigan and his cronies would be a clear case of the pot calling the kettle black. Since taking office, Rauner has practically funded the Republican party and actively tries to push defiant Republicans out of office through primaries.

In some cases, Sussman is right. Young liberal voters will vote against Rauner because he is both a millionaire and a Republican. But in the cases of those who have been paying attention to what has been occurring in Springfield the last three years, they will be voting against him because of his incompetence as governor.

Austin is a sophomore in Media.