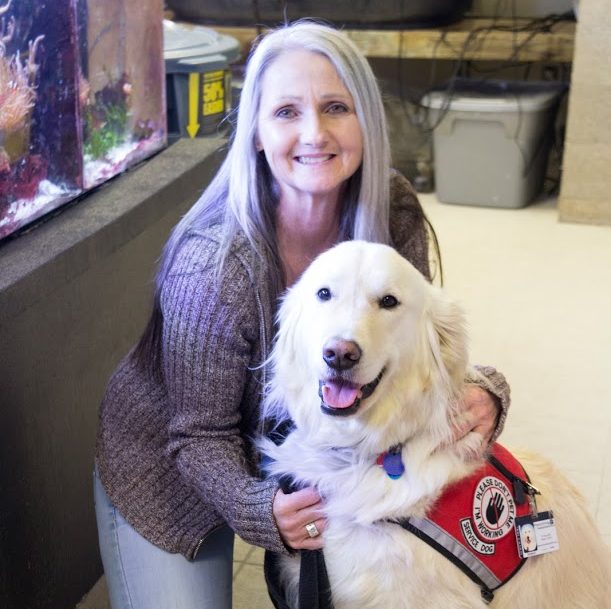 No one can deny service dogs their mantle of respect. They are truly amazing animals, having undergone extensive training that may last up to two years. Service dogs can significantly aid human companions who suffer from a wide range of disabilities. Anything from visual and auditory impairments, to PTSD, to seizure alerts and more, can be helped by the much-needed support and direction these animals provide.

As with any good thing, however, there is a caveat. Though most restaurants, stores, airlines and other public places normally barred to animals allow service dogs, some places remain restricted to even these furry partners. The live-animal labs at the Beckman Institute on campus is one such place.

Joey Ramp, a senior in LAS, and her service dog, Sampson, have twice sought approval from the Illinois Institutional Animal Care and Use Committee to permit Sampson to accompany Ramp into the animal labs. Both times, the committee has refused to grant the request, and with good reason.

Though service dogs are incredibly useful and well-trained, dogs as a species lack the certain cleanliness associated with the laboratory. Drool and dog hair aren’t exactly conducive to the sterile environment that must be maintained in animal facilities.

Allowing service dogs in live-animal labs also risks the spread of germs and infections. The dogs accompany their handlers everywhere throughout the day, including public restrooms. (And, I don’t think they wash their paws.) Who knows what those dogs are exposed to on a daily basis and what they might track into the animal labs?

Moreover, service dogs still look and smell like dogs. Many of the animals housed within the Beckman Institute, such as mice, rats and other small creatures, would more than likely sense danger if a service dog was near. Terrorizing the poor animals is not only inhumane, but it would also probably have profound effects on the ongoing experiments and studies at the Institute.

The committee’s duty is to ensure that the animals and students they are in charge of remain safe throughout the conduction of the research within the Institute. If service dogs pose any potential health threat — whether it be sickness or fear — to the animals involved, it is the committee’s responsibility to prevent it. The most efficient and complete way to do so is, of course, to decline entry to service dogs period.

Some might still argue the risks of a trained service dog causing any harm or fear to the lab animals are minimal, or the rigorous training the dogs went through prepares them to be calm, alert and non-aggressive.

However, the epidemic of fake service dogs reinforces the committee’s decision. According to the American Kennel Club, “for a certain amount of money and minimal application standards, a dog owner can receive a vest and certificate for an untrained pet.” Though Sampson, Ramp’s companion dog, may have valid credentials, other dogs may not, and there is pretty much no way to tell the difference.

While actual service dogs are well-trained and behaved at all times, those that have not received the proper training may cause any number of disruptions in a laboratory environment. Since, in the interest of fairness, allowing one dog means all others must be allowed, this risk cannot be taken while false service dogs run amok.

It’s the 21st century, and we would all like to think our limitations cannot rule us. Nonetheless, they do, and pretending otherwise only diminishes our achievements as a race.

A blind woman cannot fly a commercial airplane. A man without a voice cannot become a pop star. And people with service dogs cannot enter live-animal facilities accompanied by their four-legged friends.