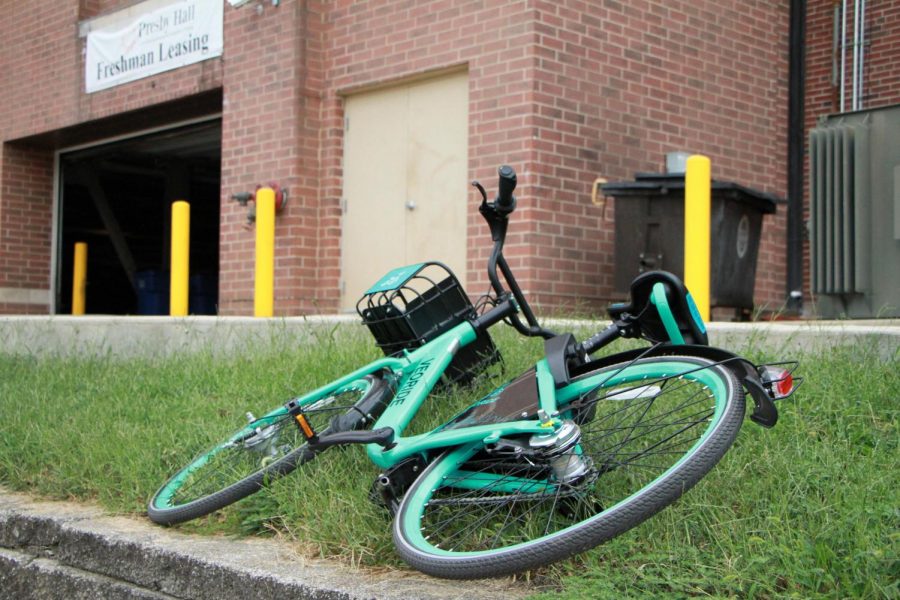 One new addition to our campus, many have noticed, is the presence of bright blue bikes with flashy lights and pay-to-ride advertisements. The bikes are almost impossible to miss here at the University, or any of the 14 others they inhabit.

These bikes were created by the company VeoRide, a bike sharing company established in March 2017. They’ve since expanded rapidly around college campuses in America, with only slight hiccups along the way.

VeoRide recently appeared in Champaign-Urbana due to the Joint Licensing Program, a collection of standardized new laws adopted by the twin cities. The company has the potential to provide many people transportation options previously unavailable to them; however, it also ushers in issues like problems with misplacement and the encroachment of private companies on public space.

While bike share programs have been established in major U.S. cities for years, the increase of dockless bike share programs, a fancy term for rent-a-bikes without designated parking areas, occurred relatively recently. They cause considerably more controversy than their more established cousins, bikes with clearly designated parking areas, and not without cause.

The benefits of the dockless design become immediately apparent upon inspecting the bikes. The locking system on the bike means they can be left practically anywhere, allowing people to start and end their journeys on these bikes wherever they please. Unfortunately, the downsides of this design become apparent as well, relating again to the freedom the design allows; the lightweight, self-contained design encourages people to pick up and move the bikes to unsafe locations.

Even in their short time here on campus, I’ve already seen these bikes pushed over, on the street or both. This shows not only the disregard people have for property that is not theirs, but also the issues that arise when you leave your stuff on the sidewalk.

Maybe a more troubling problem raised by the entrance of these bikes, more so than the issue that they may be misplaced, is what message this sends about who has a right to public space. As people search for a place to park their bike, they may wonder why we let VeoRide fill so many bike racks with their company-owned bikes.

The continued success of VeoRide, who heavily relies on public spaces to make their revenue, raises questions about how we can support innovation without allowing the encroachment of private companies on public property. Startup rent-to-ride companies and their reliance on public space are reaching a point where they seem to store their entire profit-making apparatus on the street. VeoRide pays a pittance compared to the taxpayer contributions to support the infrastructure there.

This is not an issue faced alone by Champaign-Urbana, nor an issue only about bikes cluttering our streets and sidewalks. Similar battles are being fought over scooters in Chicago and over robots in San Francisco. With the advent of new technology, cities are seeing an increasing need to protect public spaces.

The traditional power governments have over their streets through the likes of taxi licenses were already challenged by Uber and Lyft, showing the potential of these companies to disrupt traditional uses of public space. Today, we should be wary as new technology startups focus their attention on the sidewalk.

Collin is a sophomore in Engineering.