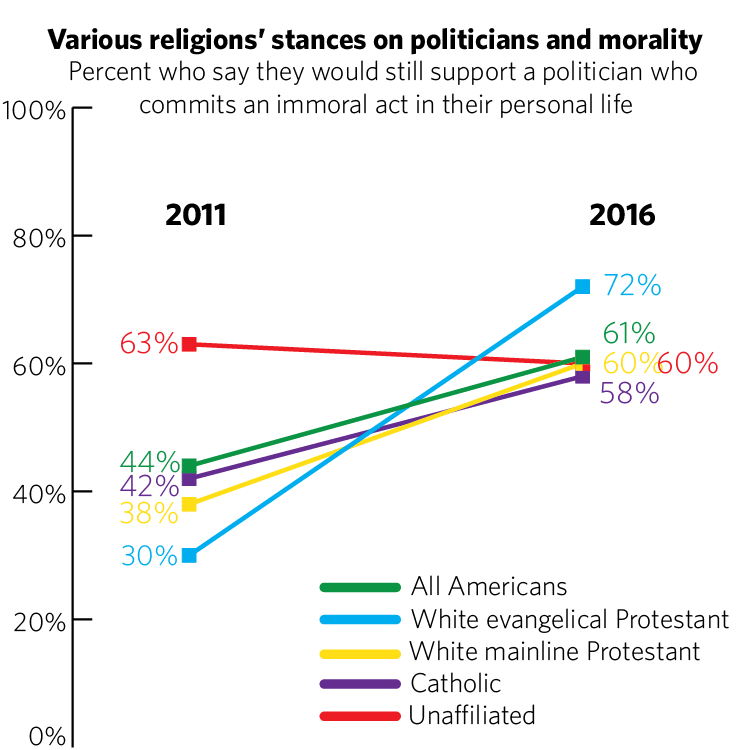 Whether Christine Ford’s accusations are valid is an important question — one that both political sides want to jump to conclusions about for political gain. However, Democrats are at least interested in exploring this claim, while Republicans and Evangelical leaders are ready to go ahead and ignore it.

This is a startling strategy considering the GOP has been down this path before with Anita Hill and most likely got it wrong by letting Clarence Thomas through. For the party that ostensibly represents America’s Christian values, sexual impropriety seems as though it is no longer a sin.

The Public Religion Research Institute and Brookings put out a poll that asked if respondents believe whether “an elected official who commits an immoral act in their personal life can still behave ethically and fulfill their duties in their public and professional life.” In 2011, while Evangelicals were the most likely group in America to say no, only 30 percent answered yes. By 2016, their opinion on an immoral personal life flip-flopped — 72 percent (more than any other group) believed that an official could ethically fulfill their duties despite their personal life.

Other mainline American Christians also experienced a spike. Why did the religious right shift their opinion to allow Trump in at all? Because they’re badly losing the culture wars.

Winners do not make deals with the devil; it’s a Hail Mary strategy. It has been 40 years since they have not been able to stop Roe v. Wade, gay marriage has been legalized and church attendance is in decline.  As further evidence of their downfall, not only are these things legal, but most Americans support abortion and gay marriage.

As to how effective this devil’s bargain has been, the numbers do not look good for the religious right. In a recent Fox News poll, most Americans do not support Kavanaugh’s nomination and more people believe Christine Ford’s claim than Kavanaugh’s alibi. Additionally, only about 41 percent of Americans approve of the President. By tying themselves to Trump and his morally questionable Supreme Court nominations, Conservatives have made a bargain that they cannot go back on.

In the early 1800s, it seemed that the West was divorcing itself from Christianity. The Enlightenment brought the values of rationalism and skepticism to America – both of which rejected religion. The divorce never went through though. One of the main reasons for this was the Second Great Awakening, a massive religious revival that swept across America. It focused on the Christian “Social Gospel.” This is a theology centered around the idea that part of being a Christian was not just banishing inner sin but also fighting worldly evils like poverty, slavery, alcoholism and child labour.

This is a simplified overview of many complicated historical trends, but the main idea is that Christianity used to attract followers by helping the common man and espousing moral values. Now, however, facing their own decline, Christian leaders have attached themselves to a losing strategy by opposing issues that most Americans have come around to accept and adopting a theology that is as inconsistent as it is dangerous.