How to deal with cold in a wide, open campus 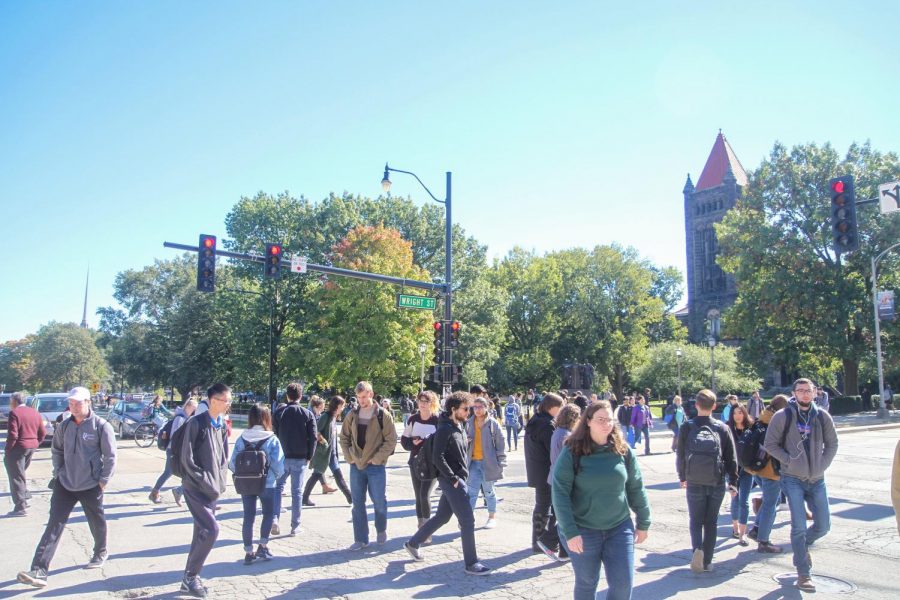 Students crossing Green and Wright to get to their morning classes on October 18, 2018.

As the University slowly becomes an arctic tundra during this fall, I have the feeling most students will not particularly enjoy it. People on campus will begin sporting large coats, some comically so, and students with 8 a.m. classes will have an even greater inclination to stay in bed. The University, as a large public institution, does contain several ways to help beat the frosty air; however, some of the methods are better than others.

One question running through my mind not so long ago on one chilly morning is why there is such a sharp divide between the makeup of your typical high school and a large university such as ours, which works out of a combined 651 buildings. These buildings, and the large distance in between them, hold a sharp contrast from smaller school systems, as anyone who has had a class in the Armory can probably attest to.

With the advent of cold weather, these large walks between classes can appear daunting or at the very least, annoying, even as snowfall in recent years is near record lows. This is a challenge for some universities — not so much ones in Florida or California — but definitely other universities, especially in the Midwest.

Many universities across the Midwest have responded to the elements and their students’ need to walk to class by connecting their buildings with skywalks and tunnels. The most well-known university tunnel system goes to Gopher Way at the University of Minnesota in Minneapolis.  The Gopher Way is so extensive on its campus that it is possible to attend class without walking outside.

Looking at other Midwestern universities, and then back here on campus, it becomes apparent that tunnels are not a viable option. There are only a few such tunnels designed for foot traffic, the most notable being the tunnel between the Undergraduate Library and Main Library.

Another potential option is the bus network operating in the University. If you need to travel a distance, a good method might be waiting at Transit Plaza for heated transportation to arrive.  Buses are great, but they do come with their flaws. The buses around campus tend to be extremely crowded, which may actually help you stay warm, but are nonetheless uncomfortable.

A more pressing issue regarding buses for people, however, is they may simply not be available to them, at least when they change classrooms. After all, MTD doesn’t exactly drive bus routes down the Main Quad.

With these options eliminated, the remaining choice for many people may still involve trekking outside and seeking better corridors when possible. We can still take advantage of our large, heated buildings for travel on campus, even if they don’t have corridors connecting them. Some exceptionally large buildings are in and of themselves essentially corridors, most notably the Armory and the Illini Union.

In the end, as winter falls upon us, the best practices we should implement might just be what our parents told us so long ago: just bundle up.

Collin is a sophomore in DGS.