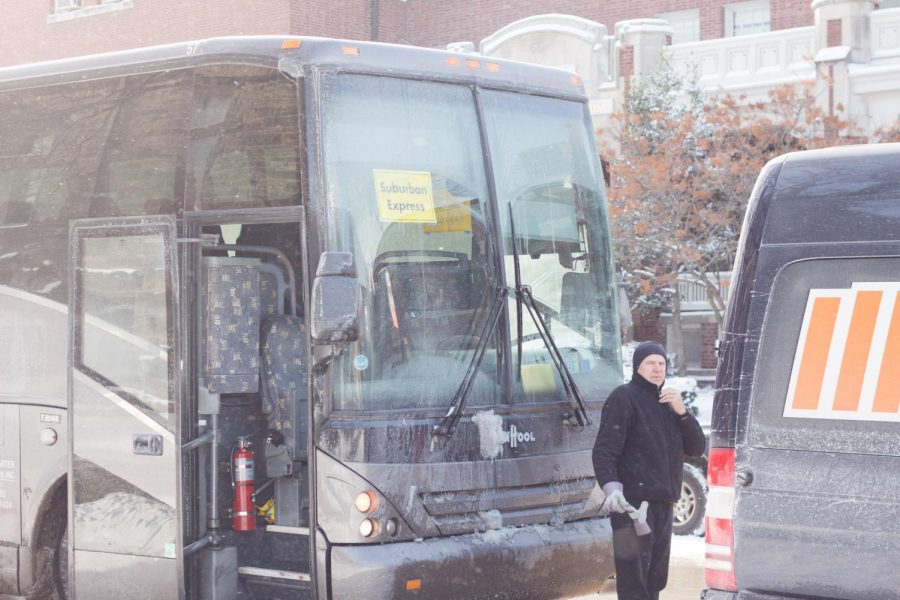 A Suburban Express driver glarers at the camera while standing near a bus on Jan. 15, 2018.

This Friday, I traveled home by bus. In fact, I traveled home with the most notorious bus company that serves Champaign: Suburban Express. I, like so many others, was expecting a disaster from the start.

But it wasn’t bad.

It was average. And maybe that average service demands that we take a new look at the company.  We should consider giving them another chance.

I’m not going to whitewash the events of last year. It would be morally irresponsible to take a trip on Suburban Express without bearing in mind the company’s frankly horrific conduct. What they did was inexcusable, and whatever business they lost was well deserved. But my experience Friday was completely fine. They let off at all the stops promised, took time to ensure we were all awake for our assigned stop and even got to mine ahead of time. No one was drawn into a shouting match, no one was turned away from the bus without a refund and no one broke into tears. The company has made a serious effort to reform their ways and needs us to accept that attempt to reform.

The service was as promised. The company is unapologetically upfront with how it expected the trip to flow. Evidently, the complaints about the poor customer service come from a combination of riders who fail to follow directions and the company’s refusal to compromise. That’s a source of some of the flak around the company, but with the repeated reminders to follow their instructions exactly, you can’t fault them for poor customer service in the face of a refusal to follow emphasized, repeated instructions.

You’ll surely receive every bit of your $27 worth, but don’t expect anything more.  At such a low price, you shouldn’t expect first class service for a three hour trip.  The way I was treated on my last trip gave me enough evidence to doubt its reputation and reevaluate the company. Service that’s “nothing special” beats terrible service any day.

As expected from their website, they may be a little condescending. It conveys a tone that’s a little too comfortable to insult their competition and former competitors. The company’s pretentious air likely stems from their uncanny ability to survive public relations catastrophes that would’ve eradicated other businesses.

I’ve never particularly cared about companies being mean, I’ve flown both United and Delta. Sure, the company’s ticketing service, website and demeanor is unsettling—it’s cocky at best, and condescending at worst; but, I certainly don’t expect companies to be extraordinarily friendly. They have every right to fire clients and even be rude occasionally.

Suburban Express holds a 2 out of 5 stars rating on Yelp, which they have responded to by posting videos from South Park excoriating Yelp reviewers. I’m not a business owner, but the best way to deal with negative criticism is to ignore it or respond politely to the offending report — not quote Trey Parker at them until they fall silent.

As for accusations of racism, I won’t comment. I am a white male and have seen little of last year’s disputes between students and the company. While I tried to keep an eye on how the employees treated other other passengers, there weren’t any incidents I noticed, although I won’t declare the company entirely reformed based on one bus ride.

My ride on Suburban Express was an average experience. They certainly didn’t live up to the reputation they’ve acquired, but didn’t do much to win me over over or absolve complaints others have had.

With last year’s events behind us, and the company laying low in recent months, it might be time to extend the olive branch and take another look at the company.  Although the company may be snide, pretentious and snarky, we can stop demonizing it without throwing our support behind it. They may not be ever be entirely clean, but from my experience they deserve another examination.

Aidan is a freshman in AHS.