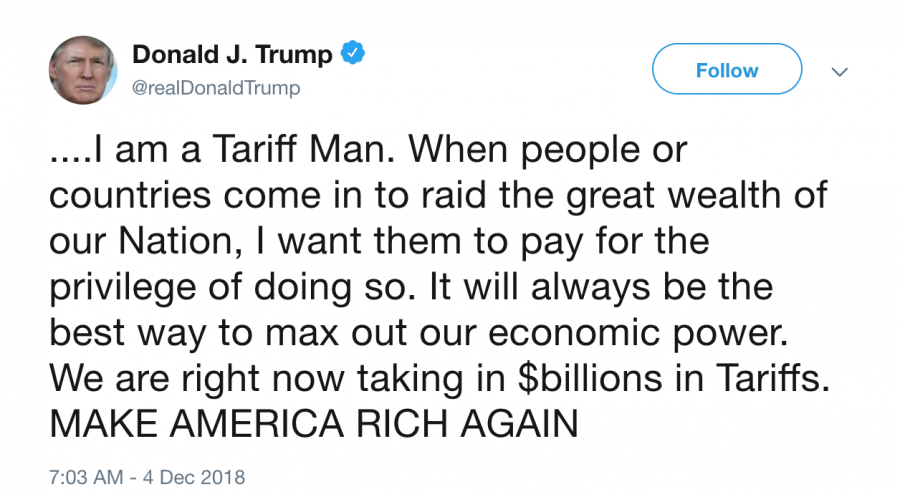 One man’s Twitter page has cost investors billions of dollars.

Recent stock market volatility has been exacerbated by tweet assaults from President Donald Trump. Since taking office, President Trump has confidently boasted about his positive impact on the economy, but recently has been poking a sleeping bear in threatening global markets.

Extremely expensive tweets are nothing new for the president, as he has frequently tried to “help” by publicizing his opinion about major companies. But 280 characters later, he often changes corporations’ market capitalization by billions of dollars.

Not only do these tweets hurt companies, but it’s unethical for a person of power to tweet about subjects which directly manipulate the market. During a healthy bull market, when stocks are on the rise, his Twitter rants result in short-term shifts that usually recover. But now that the market is showing signs of being bearish — as stocks are consistently declining — the impact is far more dangerous.

If Elon Musk gets ousted as the CEO of his own company for making a tweet the SEC ruled to be manipulative, the president of the country should at least be limited from voicing opinions and unconfirmed facts that result in extreme volatility in the accounts of his citizens.

At the G20 summit meeting on Dec. 2, it was reported the United States and China had reached a temporary truce in the trade conflict that has worried investors for months. Stocks promptly reflected the news Monday by rallying about 2 percent. Trump was being lauded as a hero, and investors across the globe exhaled in unison as recent market volatility was possibly over.

On Tuesday, he announced he was “Tariff Man” and proudly alluded to the fact an agreement was realistically nowhere in sight. This tweet was the catalyst which dropped the Dow Jones Industrial Average 6 percent for the week and wiped out $400 billion from the market.

Current worries about slowing growth has the stock market as sensitive as an insecure freshman. Now, stability is needed more than anything, but that won’t happen if the president continues to make contradictory comments that awaken a bear market as investors flee.

In today’s market climate, every new report or presidential tweet has the potential to greatly sway stock prices. The tweets are unpredictable gusts which confuse investors and disallow events such as a trade negotiation to be conducted in peace.

The president means well when he announces his thoughts on impulse, but it is economically dangerous. Imagine if President Obama were to make a market-jarring tweet during the financial crisis. The impact would have added salt to the wounds of millions.

The stock market is merely an indicator of the overall economy. But if one man can drastically change the climate of the stock market by a simple tweet, what does that say about economic health?

During the previous wave of quarterly earnings calls, most companies experienced sell-offs in their stock prices due to a lack of guidance for the future. In other words: the bear (market) will be awoken sooner than later.

President Trump needs to limit his anxiety-inducing tweets because the market has enough to worry about already. If he is really accomplishing a helpful deal with China, he should be eerily silent about negotiations until he can announce a confirmed victory for himself and the nation.

But if he continues to tweet every update on a whim and exaggerate all progress, the market will continue to be a roller coaster that damages investor sentiment at a time when companies desperately need shareholders to have an unflappable pulse.

Corrections in the market such as this are normal but are unnecessarily prolonged and more severe when investors are led to believe it’s the end of the world. Let the market run its course, and don’t expect it to fix itself on a tweet. When the market wants to correct, each positive catalyst reported by the media is just more fuel to make a lower low.

Trump needs to take a lesson from college students as they study for finals: keep your head down, stay off Twitter and don’t tell anyone you aced the test before you actually did.

Stop poking the bear, Donald, because if it wakes up, the economy you’re so proud of will go up in smoke.