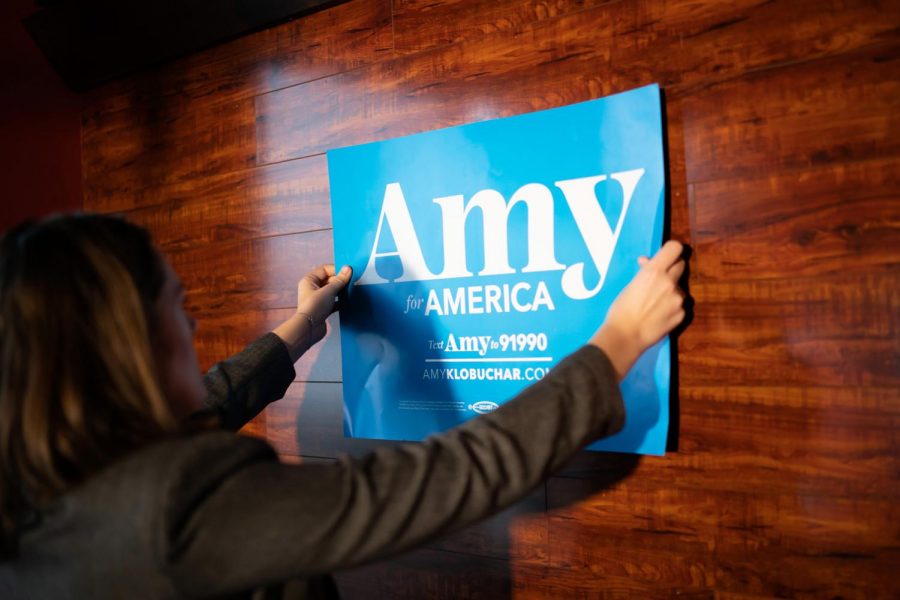 Staffer Greta Oanes tapes a Klobuchar sign on the wall, where Amy Klobuchar would speak to the Marion County Democrats, at a soup luncheon on Sunday, February 17, 2019 at Peace Tree Brewing Company in Knoxville, Iowa.

Allow me to briefly be personal. About a year or so ago, perhaps longer, I committed myself to my number one 2020 presidential candidate: Democratic Minnesota Senator Amy Klobuchar. I watched Senator Klobuchar in a televised debate over healthcare, where the senator was poised, well prepared, professional and empathetic.

Senator Klobuchar is a prideful midwesterner and a pragmatic thinker. She has been significantly effective in Congress, having sponsored more laws that passed than any other Senator during the 114th Congress, when Republicans had a majority in both houses. She remained measured when then Supreme Court nominee Brett Kavanaugh rudely talked back to the Senator during her time to vet the nominee. She has even received soft support in her presidential run from Senate Republicans, who brand her as reasonable and legislatively acuminous. It is her effective legislating style and professional conduct that quickly rose Senator Klobuchar to the top of my list for 2020 Presidential candidates.

For a while now, I have been a staunch advocate of Senator Klobuchar. It is for that reason that I am terribly heartbroken to be writing a piece emphatically discouraging voters from considering her for the Democratic nomination.

It is often best to ignore most petty attacks and mudslingers who seek to tear down candidates by exacerbating their flaws and cast them unfavorably. Mudslinging in American politics has culminated to the point where weaponized media reports malign politicians if a politician is even known to be considering a presidential run.

Through social media as well as credible publications, any and every politician is picked apart and exposed for any mistake that he or she has made in the last 30 years. It’s a toxic culture and one in which it is best for voters to focus on the positives rather than the negatives. This must be done to avoid “the lesser of two evils” situation that seems more common every election cycle. However, the possibility of a completely scandal-free president still seemed enticing, and until recently, Senator Klobuchar had that clean, desirable record. Klobuchar has always maintained the external persona of the “Minnesota Nice.” But, according to multiple reports now, this has always been just a facade.

Just days before Senator Klobuchar would announce her bid for the presidency in a fitting Midwestern blizzard, a Huffington Post article disclosed at least three potential selections to lead the Klobuchar campaign had withdrawn their names from consideration, citing the Senator’s apparent record of mistreating her staff.

While most major publications have not yet expanded on this initial reporting, the Huffington Post and New York Magazine have continued to allege that the Senator grossly maltreats her staffers and fosters a hostile work environment. The reports were both surprising and credible enough to have quickly been trending on Twitter and diffused to all other corners of social media. It even gained enough attention that Senator Klobuchar herself responded on multiple occasions, never by rebuking the reports but by agreeing that she “can be tough.”

But in these reports, the Senator is not just “tough.” The aggregate allegations include Senator Klobuchar throwing a binder at a staffer (which the senator has since claimed that she threw downwards, not at the staffer), bursting into a fit of rage over trivial mistakes such as grammar or using staples over paper clips, and making her staffers cry often through publicly shaming. Senator Klobuchar even is said to have ordered one of her staffers to inform others that said staffer was bad at her job. A follow up report from the Huffington Post alleges that former Senate Minority leader Harry Reid in private had reprimanded Senator Klobuchar over her infamous reputation as an agonizing boss, which was well-known on the Hill.

These reports are packed with overwhelming amounts of stories of the senator’s cruel treatment from anonymous former staffers. While one is welcome to question the veracity of the anonymous sources, there is at least one publicly known metric that would support their testimony: Senator Klobuchar has consistently had the highest staff turnover rate in the Senate.

The problem mainly became evident with a Washington Post opinion titled, “Does it matter if Amy Klobuchar is a mean boss?” On Twitter, liberals and supporters of Klobuchar began to rationalize the story and decry the report as sexism. Many were of the opinion that the story would not have gained steam if it were about a commanding man boss and that those who saw this as a legitimate criticism had never worked on the Hill before.

Neither of these attempts to spin a bad story are tenable in the least. Yes, it matters immensely if Senator Klobuchar was as unnecessarily cruel to her staffers as these reports allege. One of a public servant’s duties is to inspire others which clearly cannot be done by someone who runs her office based on fear and demoralization tactics. The attempts to downplay her behavior as normal or even remotely acceptable is absolutely terrifying. She is accused of having thrown projectiles at her staffers and treated them so terribly that Senate leadership had to involve itself.

This is not “having high expectations,” as many, including the Senator herself, have tried to claim to reconcile the situation. The story is not about a woman who is a little tough on her staffers and is being maligned for it. The story is about the United States senator with an objectively high staff turnover rate and a reputation among congressional staffers for being a nightmare to work with due to exacting standards.

Any sort of defense of this behavior is reprehensible and is blinded by a partisan instinct to explain away the controversy. Call a spade a spade. If Senator Klobuchar’s two faced nature is as accurate as the reports insinuate, she is deserving of criticism.

Harassing one’s subordinates makes explicit a lack of empathy. Congressional staffers, who universally are known to be overworked and taken advantage of by Congressional members, do not need to lose the little sleep they get over whether or not their boss will make them the target of a tirade in a late night email sent to the entire office.

The constant chaotic nature of her office as alluded to by anonymous staffers is not a healthy nor professional work atmosphere. The high turnover rate is an unsustainable way to manage an office. Senator Amy Klobuchar is not worthy of my vote nor anyone else’s, given that how she runs her office would be analogous to how she would handle the White House: through blood and iron.

Cruelty is a dealbreaker for me, as should it be for other voters.