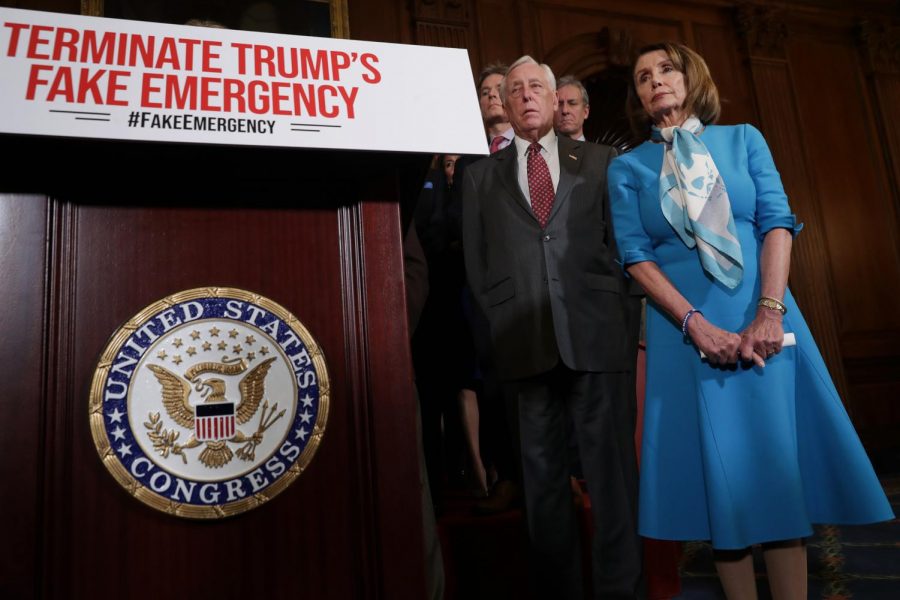 Speaker of the House Nancy Pelosi (D-CA) (R) is joined by House Majority Leader Steny Hoyer (D-MD) and other House Democrats for a news conference on the privileged resolution to terminate President Donald Trump’s emergency declaration Feb. 25, in Washington, D.C. The House passed a resolution to abolish Trump’s declaration of a national emergency to build a U.S.- Mexico border wall.

Back in 2016, one large criticism of then presidential candidate Donald Trump was , unlike every single one of his predecessors, he had no political or military experience and was, on all accounts, an outsider.

The Democratic Party used this to contend that he lacked the expertise and the professionalism the office required; however, the GOP, formally making him their candidate, proved they weren’t bothered. Since the 2016 election, to the detriment of the GOP, leadership and other Republican heavyweights have been unable to sharpen his political adroitness in time for a Democratic House. This is most clearly shown through his unsuccessful tactics while sparring with new Speaker of the House, Nancy Pelosi.

Back then, minority leader Pelosi faced more internal demur than ever as she attempted to whip votes for her Speakership. Upon reflection, two months into her tenure as speaker, the best decision House Democrats have made since taking power was electing a woman as politically savvy as Pelosi to be the one to altercate with the president. Since reclaiming the position as speaker of the house, Madam Speaker has politically outmaneuvered the president at every opportunity, making her his perfect antithesis.

Speaker Pelosi first proved her acumen back in the beginning of December during a public Oval Office meeting with Senate Minority Leader Chuck Schumer and Trump himself. The meeting, made public by the president, was meant to grant him an opportunity to appear strong and embarrass Democratic leadership. However, during that meeting, Pelosi clearly flustered the president on multiple occasions, such as when she called the impending shutdown the “Trump shutdown” or when she stood up to him, telling him not to speak about her or the strength that she brought to the meeting.

The meeting proved disastrous for the president when Democratic leadership coerced him into taking credit for the looming shutdown. The president handed, with a bow on top, the best soundbite Democrats could ever hope for, giving them needed leverage with the public to hold their ground by the time the government shut down.

Once it occurred, the war of attrition began. Schumer was powerless with Senate Majority Leader Mitch McConnell refusing to involve himself, meaning the holdout was between only Speaker Pelosi and President Trump. The problem for the president was his choice to fight an uphill battle, as public opinion was already on the Democrats’ side and Pelosi was prepared to counter all of his stratagem and double down on her position.

First, in order to secure the votes for a budget that included the wall funding he was demanding, Trump employed a tactic familiar to him while Paul Ryan held the Speakership, circumventing the speaker altogether by inviting potentially vulnerable legislators to the White House.

In an attempt to undermine Pelosi’s leadership, he invited moderate Democrats to the White House to negotiate, but none of them showed up, illustrating the control she has over her own members.

Speaker Pelosi also attempted to reassert her place and the power it held when she asked the president to reschedule the State of the Union until after the shutdown. The White House retaliated by cancelling her trip to Afghanistan and considered other locations for the event.

After exhausting alternatives, the White House called Pelosi’s bluff, but she wasn’t bluffing. She subsequently cancelled it. Many saw this as a petty political play, but Trump is more interested in projecting power than being seen as the bigger man, so Pelosi’s exacted play and his capitulation must have rattled him and hurt his pride.

While Pelosi certainly has more prowess as a political actor than Trump, one large difference between the tactics each employs is that Pelosi heavily relies on public opinion polls to see whether a fight is worth it and which tactics she should fight with. President Trump believed for a long month he could sway public opinion through an Oval Office address or by visiting the border, but this was ultimately unsuccessful.

With his avid refusal to back down despite his approval ratings worsening as he took the brunt of the blame for the shutdown, Pelosi was able to outmaneuver him at every turn and keep the pressure on. The Democrats focused on the furloughed federal workers and kept the public’s attention on that, rather than illegal immigration through the southern border.

Eventually, the shutdown ends with President Trump signing a temporary CR (a lawmaker’s term for a budget) and renewing an empty threat for another shutdown. He ends up avoiding another one by accepting a budget with less money for the wall than he was originally offered prior to the first shutdown and executes an unpopular emergency declaration that has since been challenged in the courts.

This was likely another critical strategy by the Democrats: offer Trump lots of money for border security, but not for the wall, knowing he wouldn’t take it. By the time he did give in, many conservatives, such as Ann Coulter, would shame the very man who wrote “Art of the Deal” for getting a worse deal than was originally proposed.

The White House lost the game of chicken by all metrics, as Democratic leadership was able to play the game better. However, Speaker Pelosi hasn’t just proven her ability to outmatch the president through the shutdown.

Madam Speaker is publicly impudent when it serves to help give her good PR, such as cheekily quoting Reagan in her first speech as speaker, lofting calculated criticisms at the president during speeches or shuffling through papers and condescendingly clapping during the State of the Union.

Pelosi knows the president is vastly unpopular — especially among Democrats. Pelosi knows that the Democratic Party, while divided, is united on one key front: making Trump a one-term president. She understands these truths and capitalizes on them in order to earn unwavering loyalty from all of the House Democrats.

While she faced dissent when attempting to ascend to her position, in the past two months her approval rating has improved and she has regained the respect of Democratic voters and colleagues. This has allowed her to amass even more unified support and legitimacy from her caucus.

Democrats had steep reservations about making her the Speaker of the House once again, but they better be glad they did. Her ability to counter the president goes nearly unparalleled and her ability to squash internal dissent remains impressive.

Back in 2010, when Republicans took the House, the division between Republican caucuses led to great inefficiency for years while Speaker Boehner and Speaker Ryan failed to command the House. Speaker Pelosi, in just two months, has made it abundantly clear she has learned from the GOP’s mistakes and will not fall victim to the same inefficiencies. Given her ability to curtail dissent and unify House Democrats — even the most conservative ones — President Trump should be terrified for his next two years.