There’s trouble in ‘the Resistance’ to Trump 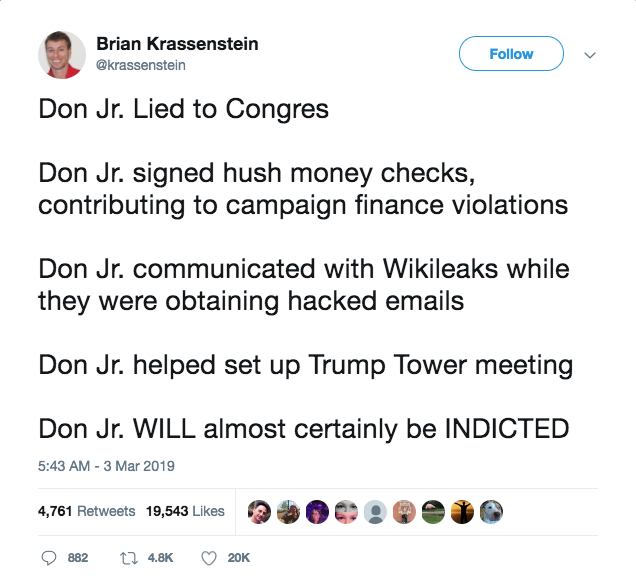 “The enemy of my enemy is my friend” is a proverb that sounds wise if you don’t think too hard about it. Since the election of President Donald Trump, a loose network of people self-titled “the Resistance”  has arisen. The Resistance has no binding ideology other than standing in opposition to the president. It has no leader but many important figures. Some people saw this new mass movement as a chance to gain influence. Many liberals, who aren’t thinking too hard about that proverb, invited these opportunists with open arms.

There are two kinds of problematic people in the Resistance. The first group is grifters. These people are usually political comedians or social media stars looking to turn their “wokeness” into cash. The others are anti-Trump Republican intellectuals who find themselves in search of a new home.

Grifters come in all shapes and sizes, but the most blatant example in the Resistance are the Krassenstein Brothers. The pair are Twitter warriors who spend their time tweeting pointless and unoriginal things at the president. Through this, they have amassed a combined 1.5 million followers.

Before Trump, they were investigated for their ties to an alleged Ponzi scheme and have applied that same business spirit to fighting Trump. They released a children’s book called “How the People Trumped Ronald Plump” depicting Robert Mueller, characterized as  “Robert Moral,” a buff shirtless superman fighting “Ronald Plump” and other family members like “Jared Nepotism.” But their bad jokes are not the worst part. They even created their own news website and podcast to recycle anti-Trump clickbait to generate ad revenue.

The next set of grifters are the late night comedians and cringeworthy Saturday Night Live cold opens which have used the opportunity created by the president’s incompetence to boost ratings. Their humor rarely has a punchline or builds on itself, and instead simply references to things in the news. A-list celebrities are brought in to create the feeble idea that all anti-Trumpers are in the fight together.

The main problem with the grifters category is not just they are only in it for the money, but they are taking space away from actual substantive commentary on Trump. They are smug ways for most liberals to feel good about themselves.

Take a recent Krassenstein tweet responding to the president who was promoting a book which reviews him positively: “Robert Mueller is currently writing ‘A case against Trump.’  It will be epic!” This bad attempt at humor got almost five thousand likes despite doing nothing but making some liberals feel better.

Just because someone is anti-Trump does not make them a liberal or good source of information. After all, despite all the bad things the president represents, his unusual rise to power means something is wrong and thus needs to be fixed. There are plenty of people who are a part of this problem who, only because of their opposition to the president, are being welcomed in by liberals.

Take writer Kevin D. Williamson. A few years back, The Atlantic, a left-leaning magazine, wanted to hire a Republican anti-Trumper, so they chose National Review writer Kevin D. Williamson. The magazine felt the spirit of resistance and saw they had a common enemy, but this alliance was short-lived. He was soon fired for saying women who get abortions should be hanged. It makes one wonder why he was hired in the first place. Diversity of thought is an admirable goal, but some ideas are simply dumb and do not push the conversation forward. For example, Williamson also wrote an article about how white working class communities “deserve to die.” In the wider context of the article, all he is doing is urging people in the rust belt to get out, but Williamson does not seem to get the pointlessness of this.

First, not a lot of ex-factory workers are picking up the National Review in search of Williamson’s advice, so really it is just a piece for the National Review’s actual readers — wealthy conservatives — to feel okay about what is going on.

Second, Williamson never has any interest in helping them move. There is no talk of re-education or investment. Ultimately, like his abortion comment, it is just a glib rebuke of a group of people who do not fit into his political agenda. So why should a liberal newspaper like The Atlantic hire Williamson? Their only stated reason is he is an anti-Trump conservative — a phrase that should be synonymous with irrelevance. If the left wants to win in 2020, reaching out to working-class communities, instead of telling them they deserve to die, may be a good strategy. Liberals should let this bygone conservatism go instead of paying it money to talk more. The National Review or the Wall Street Journal are not interested in hiring a nice liberal columnist because they actually want to win. The left would be smart to copy this instead of letting people who have nothing to add on board.

Tucker Carlson even wrote a surprisingly thoughtful piece asking why many neo-conservatives, specifically Max Boot and William Kristol, who wanted the Iraq War and are not sorry for it, are still given credence. They have been consistently wrong, and their writings, like “The Weekly Standard,” are not even profitable. It is sad far-right figures like Tucker Carlson see this problem while some liberals are joyfully embracing the very people whose negative influence on the country helped elect Trump in the first place.

Despite many of the bad things Trump represents, there were legitimate problems he addressed during the campaign. His unexpected victory over a more traditional candidate such as Hillary Clinton means something is structurally wrong with America, a fact many anti-Trump liberals refuse to believe. People like Boot, Kristol and Williamson advocated for policies that created this mess and have now been rejected from their own party. Democrats should not let them into the conversation simply because they also do not like Trump. There are some Democrats who are so mad at Trump they are not seeing the bigger picture.

Trump’s criticism of the foreign policy establishment and pledge to “drain the swamp” have been mostly hypocritical. He brought on John Bolton, who helped sell the “Weapons of Mass Destruction” lie to the Bush administration, and has advocated for further American military involvement in world affairs. Early on, Trump also hired Paul Manafort and Roger Stone, who created modern influence peddling lobby by selling their close relationship to Ronald Reagan for cash and helped modernize money in politics into the well organized super PACs we know today. Their firm, Black, Manafort, Stone and Kelly, soon became mocked as the torture lobby for taking money from dictators in exchange for influencing U.S. policy.

Despite the hypocrisy of these goals, which are shaking up the Foreign Policy establishment and getting money out of politics, they are still admirable and the left should consider them as a part of their platform for 2020. Democrats have a real shot at beating Trump this time around. To do this, however, Democrats need to keep the swamp monsters and grifters out of the conversation. Just because they are also anti-Trump does not mean they are friends.