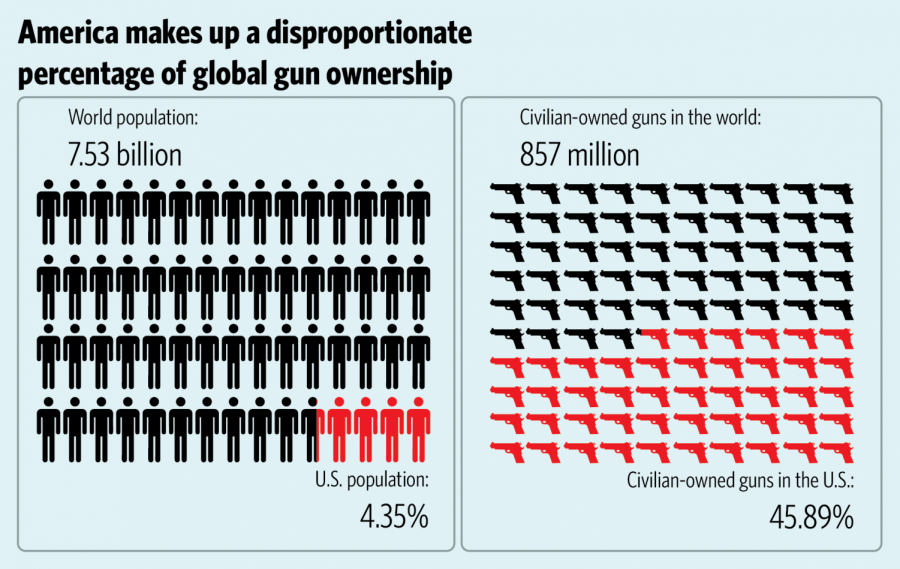 After 50 people were killed in a tragic mass shooting in a mosque in Christchurch, New Zealand, the country’s parliament passed legislation banning most semi-automatic rifles and will likely continue to expand the gun ban’s reach, according to Deputy Prime Minister Winston Peters. This legislation took effect Thursday morning.

New Zealand’s government has made a laudable effort to repair a broken regulatory system. Why hasn’t America been able to overcome partisan division and do the same?

It’s partly because American gun culture is a shocking phenomenon. There are 120 guns for every 100 people in America, according to the Small Arms Survey. We have more than twice as many guns per capita as our next highest neighbor on the list, Yemen, a country devastated by civil war.

But those numbers are nuanced. American gun manufacturing almost tripled in the 2000s, up from just under 4 million guns in 2008 to almost 11 million in 2013.

At the same time, research from the National Opinion Research Center shows the number of gun-owning households has decreased from over 50% in 1980 to just over 30% in 2014. This suggests even though the United States has an extraordinary number of guns per capita, those guns are owned by a disproportionately small chunk of the American populace.

This upward trend in gun manufacturing, coupled with the downward trend in support for gun control, is a direct result of the lobbying efforts of the National Rifle Association.

For example, after President Barack Obama took office in 2008, gun manufacturing skyrocketed as pundits and politicians alike used scare tactics to incite fear in their constituents, from `08 headlines calling Obama a “true threat to freedom” to early 2017 articles railing on Obama’s last days in office. Those same articles praised Trump for protecting “constitutional freedoms” and “making communities safer by taking violent criminals off our streets.

The NRA and its affiliates are incredible at crafting arguments aimed to radicalize. They combine manipulated statistics difficult to directly disprove, instigatory language painting gun owners as an oppressed class desperately fighting for basic rights and fear-mongering morphing “far-left” legislators and illegal immigrants into the perfect monster under the bed.

What does the NRA gain from radicalizing these people? It’s fairly simple. It constantly reinforces two key ideas: The government wants to take away your guns, and it’s letting in violent criminals who are hell-bent on attacking you, specifically. This pushes the NRA’s bases to buy more firearms, and faster.

This happened when bump stocks were made illegal. Gun manufacturers used the date the law would be put in place as a countdown on their websites, telling customers they should buy quickly before they couldn’t buy anymore. The more frightened these people are for their safety and liberties, the better for gun manufacturers’ bank books.

The NRA gets some of its funding from the dues paid by its 5 million members, and its most devoted supporters donate to it, vote for the candidates it tells them to and buy the products it pushes in the name of protecting their individual freedoms.

Large donors with political interests such as the Koch brothers and conservative super PACs also contribute heavily, giving the NRA an edge over gun control groups that seek to raise grassroots funding. The organization spent $50 million during the 2016 election cycle and has launched several expensive ad campaigns against politicians who vote against gun rights.

The NRA consistently opposes almost all gun regulation, lobbying senators, representatives and several government agencies. The NRA and other groups of its kind tout our few existing gun laws as an overreach, but these laws are poorly enforced and easy to skirt.

For example, every gun purchase requires a background check to make sure the buyer doesn’t have a felony record, isn’t the subject of a restraining order, hasn’t been convicted of domestic violence, isn’t addicted to drugs, isn’t severely mentally ill and isn’t undocumented.

But there are limits on the time allotted to complete a background check. If it takes too long, prospective gun owners can slip past without one. To make matters worse, the databases used to run these checks are incomplete and inaccurate, and the department conducting them is understaffed and underfunded.

A glaring loophole in the law also allows guns to be purchased from private sellers with no background check necessary at all. If you want a gun, you can buy one.

Federal firearm transportation laws are also incredibly lax — if you are legally allowed to own a gun, you can legally transport it across state lines. This means state-level regulation is virtually powerless.

There’s an example of the massive flaw in our system right here in Illinois. While Chicago has relatively strict gun regulations, those looking to buy a gun can pop over to Indiana and purchase a gun at a gun show — a purchase which will be entirely legal, go unrecorded and require no background check. They can then just drive that gun back into the city.

All of these loopholes are a direct result of governmental negligence. The NRA’s radicalizing and lobbying only works so effectively because our elected officials are so willing to ignore reality in favor of profit and power.

Our representatives must start actually representing their constituents who are not only gun owners, but the people who are vulnerable to gun violence.

Sandhya is a sophomore in LAS.