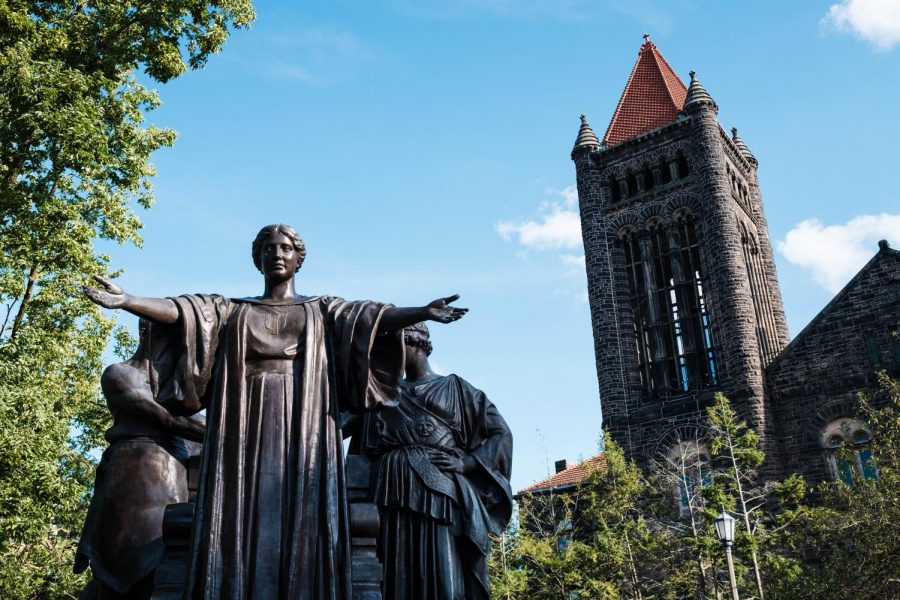 The Alma Mater on Wright St and Green St. Assistant opinions editor Kyra demands the University find a solution that closes the loophole without forgetting the students this policy was designed to benefit. and thus restore this institution’s.

Wealthy families of University students have been exploiting a legal loophole to make in-state tuition even cheaper at the expense of all other Illinois students and taxpayers.

In mid-July, ProPublica reported dozens, if not more, of affluent families have been encouraging their children to emancipate themselves from their parents before they turn 18 — a process which declares children are no longer dependents of their parents and parents are no longer legal guardians of their children. The process manipulates students’ FAFSA applications to show they have virtually no income and no support from their families, thereby guaranteeing them more student aid.

The ire that the scandal caused over the summer was strong and immediate, as well it should be. Not only did Illinois residents find out they’ve been subsidizing the higher education of wealthy kids, but the story was published by the national media, making Illinois yet again the butt of jokes about corruption and ineffectual government.

But as we move forward as a state to fix this oversight, we have to make sure we keep in mind what this “loophole” was meant to do. The purpose of the emancipation process was to allow students with abusive families to separate themselves and their finances from anyone at home who might pose a danger to their savings for college; this is obviously not the only scenario this has been used for.

Imagine, for example, having a parent who cannot be trusted to control a child’s finances — either because of a substance abuse problem, an emotionally abusive parental relationship or some other externality. That child should be able to emancipate themselves from their parent to not only ensure they are the sole custodian of their finances but to make sure the income of a parent who won’t be financially supportive during college won’t be counted against them by the FAFSA they fill out.

The system is not rigged; it’s just been corrupted. The real culprit of this hoax is wealthy Illinois families, yet again taking advantage of systems not meant to benefit them. Those offenders should be punished and prevented from committing the same crime in the future. But this loophole can’t be closed without remedy — that would leave many Illinois students, like in the above example, in the dark.

Instead, state legislators need to take a good, hard look at what Illinois students of different backgrounds need to succeed in our state’s education system. Two public Illinois universities wound up on the list of the 50 most expensive state schools in the country. Many top public high school graduates get better financial aid packages from public and private colleges in other states, exacerbating the already painful exodus of human capital from the land of Lincoln. The mounting student debt crisis affects Illinois residents directly, as our state shoulders more student debt than more than half of all other states in the country.

The hemorrhage of workers, the rising cost of living and education, the painful debt diminishing Illinois consumers’ economic freedom, the corruption by wealthy Illinois families — these are all symptoms of a larger problem in our state. We don’t allocate resources in an equitable way. That misallocation results in a pay-to-play culture driven by desperation to circumvent the rules and, of course, by greed and privilege.

Ensuring rich Illinois residents pay their fair share is a step in the right direction. But we can’t punish working-class Illinoisians for the sins of the privileged — that would just worsen the resource allocation crisis and make the already-rampant inequality in our state even more serious. We need to close this loophole, ensure affluent Illinois residents are helping to subsidize the tuitions of working- and middle-class students, not the other way around, and go further to make higher education more accessible to first-generation and low-income students.

In short, we need to promote equity in our state and right this crooked system. The wealthy should be made to pay their good fortune forward, not drain our state’s already strapped resources.

Kyra is a junior in LAS.