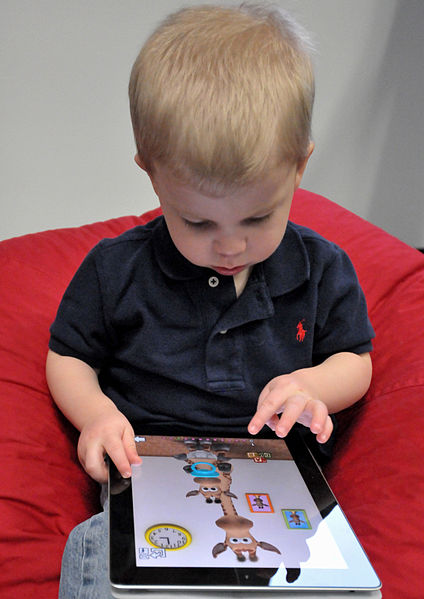 A child plays a video game on a tablet. Columnist Ellen urges parents to allow their children to be bored and, thus, cultivate their imagination rather than drown them in technology.

I had a weird summer. I babysat/teenage-sat (I hereby declare “teenage-sat” a word) an 11-year-old and a 15-year-old. I learned many a lesson from my quirky summer job. The most important of all the lessons, however, was to not give your kid an iPad. Seriously.

The imagination of a child is a wonderful thing. I remember my neighbor and I made a fort out of a large bush in her backyard when we were 11; we fashioned “thrones” out of flagstones, “cooked” with the berries on a bush and used water from the creek. It was a blast and a half.

Today’s 11-year-olds don’t want to play make believe. They want to watch vloggers on YouTube or make some slime. But, that’s about it.

Technology is undeniably a huge part of our lives these days, even for kids. But I worry how this boundless technology will affect future generations.

I’m 20, I’m not a parent, but I have a bit of parenting advice to throw out there: Let your kids be bored.

Being bored is a wonderful thing. Boredom forces you to think creatively, to find something to do with whatever is around the house, to fool around and pretend and play and just be a kid.

If we want the next generation to be composed of engineers, artists, writers and teachers, we need to keep kids off of iPads. Throw the devices in a lake. Smash them with a hammer. Or, better yet, don’t give your kid one in the first place.

When I was 11, I read voraciously. The summer before sixth grade, I was bored, so I decided to see how quickly I could read the Harry Potter series in its entirety. It took me 17 days.

Let’s turn the tables a little bit. If you had a choice, would you watch Netflix, or would you read a book?

Tech-free time should be a family affair. I think all our imaginations could use a little TLC.