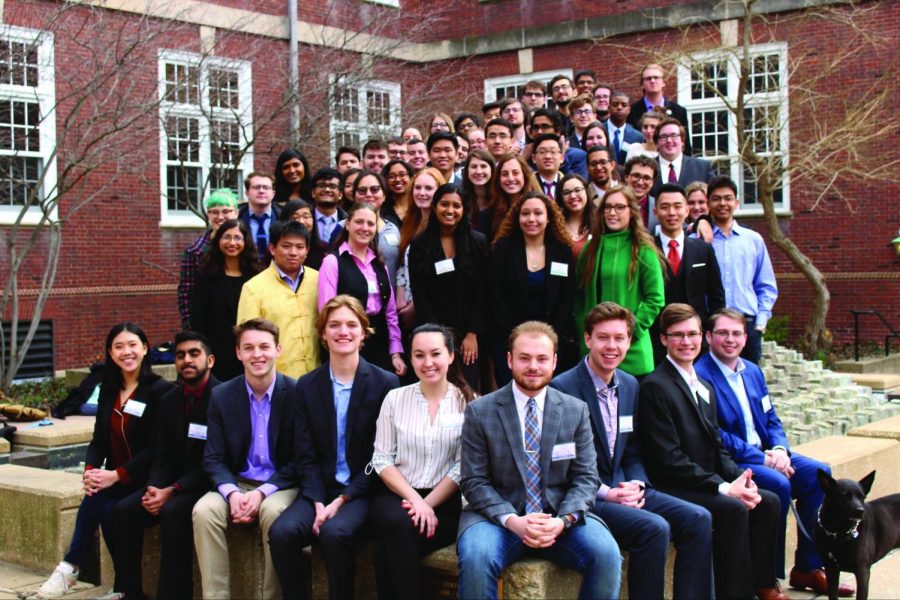 The University Model United Nations team poses for a picture in March 2017. Students involved are tasked with complexities of the political world while attaining real-world benefits.

In Model United Nations, the splendors of the imagination radiate. One might find themselves deescalating an international hostage crisis, undermining the Czar during the Russian Revolution, drafting a resolution on nuclear non-proliferation or aiding a resistance movement of Uyghur Muslims in eastern China.

It is a competitive activity where one’s enterprise is limitless and endlessly rewarded for one’s wanderlust into the mind’s expansive ingenuity.

My freshman year, in my search for the right RSO, I found my home in Model United Nations. This year, I will have the honor of serving as the club’s Vice President Internal. It is dutiful of me, therefore, to clarify what Model UN is and what it is not.

Someone once told me Model UN is nothing more than political larping, which given the stigma was quite unsettling, but it is far more than that restrictive representation.

Model UN is broken up into two main types of committees: general assemblies and crisis committees.

GAs are large committees that teach leadership skills and the ability to maneuver through power dynamics and culminate in a UN-style resolution. This is the more traditional “Model UN” people generally think of, but in college MUN, it is less common than crisis committees.

Crisis committees are smaller, more dynamic committees where the delegates are required to write directives to adapt to the constantly-changing circumstances and ever-evolving crises. These committees encourage outward diplomacy through speeches and underlying subversion through hidden plans. They develop creativity and the ability to manipulate circumstances in one’s favor. It teaches the truth of keeping one’s friends close but his or her enemies closer.

The club offers incredible real-world benefits beyond looking good on a resume. The social acumen one gains from such an activity are entirely practical in everyday life. Aside from public speaking skills, writing and reading skills and diplomacy skills, MUN teaches one adaptation, hones problem-solving skills, persuasion and leadership. It also teaches one a lot about power dynamics and how to manipulate them, as well as a grandiose amount of political and historical knowledge.

The second-largest misconception surrounding the club is it is only for political science or global studies students. This is definitely not the case.

The exec board for this coming year’s club is comprised of all different majors, from business to engineering, political science and premed. MUN is not dominated by one gender, it is fairly well-balanced. It is also filled with members who have different amounts of exposure to MUN competition. Some are rigorously competitive, and some are new and still inexperienced.

One does not have to be politically astute or a history buff to do well in this club, just dedicated to learning. Due to the broad nature of the committee circumstances, this organization is one in which everyone can find a place.

Similarly, our members are there for various reasons. Some wish to travel with the team to conferences around the country. Some are there to staff our spring MUNI conference for high school MUN participants. Some are there simply for the esprit de corps cultivated by the wholesome, inclusive culture of the club.

But members of the team contribute toward the team in different ways, and the only mandatory task of membership is staffing MUNI. Therefore, the commitment is decided by the members themselves. It really is a team in which one’s gains are contingent on what they put in.

Many students on campus have mentally segregated RSOs into two distinct categories: fun recreational clubs and professional RSOs for resume-building. MUN is the bridge between these two categories. MUN is an activity revered among employers for its value in professional development but is also incredibly enjoyable to participate in.

In Model UN, I have authored a resolution ostensibly solving Kurdish persecution in the Middle East, I have coordinated the assassination of my business partner in ancient Athens, risen to become the first Prime Minister of a free Ireland and administered the drug trade of the 14K triad in Kowloon Walled City.

To those still searching for an extracurricular to fit them, I implore you to come to a meeting — Tuesday nights at 8 p.m. in 245 Wohlers Hall. I guarantee it to be your oasis.