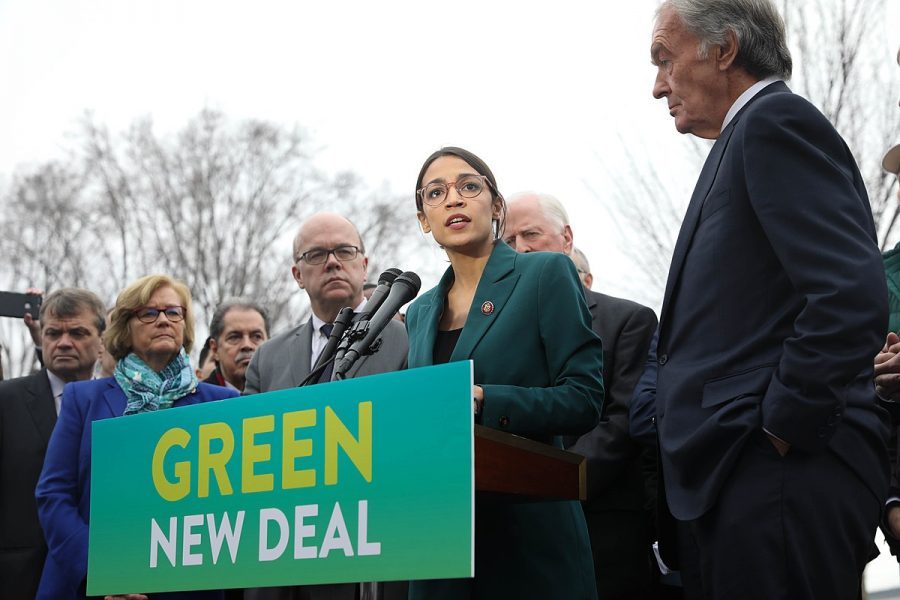 Representative Alexandria Ocasio-Cortez (center) speaks on the Green New Deal with Senator Ed Markey (right) in front of the Capitol Building in February. Columnist Andrew urges the public to recognize the asymmetric polarization of the partisan system.

According to media outlets, Democrats are swiftly polarizing into neo-Marxists. Don’t listen to their feigned outrage. The political spectrum is complex and completely relative.

Although ‘left’ and ‘right’ have disparate meanings in other countries, they also can have different connotations in other time periods. The meanings change constantly.

The world is currently established in a political era still imbued by Reaganism. While it may seem as though the newer generations are becoming radical liberals, that may only hold true when one considers that it is relative as most of society has been politically socialized into a spectrum where the center is more conservative when compared to the recent past.

Democrats are moving away from the center, but they are not traversing unexplored territory. Their stance is reminiscent of the zeitgeist of the West post-World War II. The U.S. experienced a similar period of time where both Democrats and Republicans believed in strong unions, a strong social welfare net and even pushed health care for all.

Besides, the Democratic Party finally uniting on fundamental ideas and principles is not dissimilar to the Republican Party. The Democrats, which contain members from Joe Manchin to Alexandria Ocasio-Cortez, have long since been the scattered and unorganized leftovers of the political spectrum after Republicans consolidated under Newt Gingrich and moved farther right in recent years.

Therefore, it is not unexpected when Republicans and conservative media become outraged at the fact Democrats are not assenting to moderate or even conservative stances, but it is unfair when Democrats are lambasted for revitalizing political stances the party previously subscribed to during the New Deal era.

Yet the Democratic Party struggles to gain positive press coverage on the unveiling of “leftist” stances, because as the Republican Party has pulled sharply to the right under Trump, media is refashioning the American moderate in an attempt to look objective. Now, overtly conservative pundits and politicians like Ana Navarro and John McCain are being chronicled as moderates simply because they do not like President Trump.

Conservatives who dislike President Trump are not necessarily moderates, Democrats taking a more liberal stance are not necessarily radical and far-left politicians like Representative Ocasio-Cortez or Senators Warren and Sanders are not unprecedented. These are shrouded efforts to trick the public into misinterpreting where the center of the modern American political spectrum is and quietly placing it in a far more conservative position.

As this Politico opinion outlines, Democrats are restoring their old image. Ideas such as universal basic income and government-paid education enjoyed broad support within the party and therefore planted itself in the mainstream in America following World War II.

Liberals have even been trying to accomplish single-payer health care since President Roosevelt — the first one. Medicare, social security and a federal minimum wage — once ideas stymied by the conservative wing of American politics — now exist today and are widely accepted, but they only exist because Democrats championed those very policies back in the mid-twentieth century and persevered through staunch Republican opposition.

Historical recollections like these are testaments to just how conservative American politics have become in the wake of Reagan, Clinton and Bush. To argue the “progressive” agenda promulgated by new, young Democrats is inconsistent with the party’s past is ahistorical. Democrats are simply attempting to recover from a Clinton-esque Democratic Party.

Many Democrats have attempted to connect themselves to the party’s antecedents by branding their new aspirational proposal as the Green New Deal.

Perhaps the connection to the New Deal is not undeserved. Conditions today are similar to the 1930s in some ways. America is still recovering from an economic disaster, wealth inequality is worsening and corporations are consolidating power without a Teddy Roosevelt-type present to trust-bust.

Argue policy for its merits and its shortcomings. Progressive ideas have both. But arguing that this Democratic Party falls dangerously beyond the limits of the American political spectrum is incongruous with history and fails to recognize the overall conservative shift in its politics since the 1980s.

Conservatives can abuse the word “socialism” and brand it to every proposal as they have for decades, but they should recognize much of the economic security and social safety net they enjoy, and for the most part approve of, would not exist were it not for a robust, united, progressive Democratic Party like the one re-forming today.