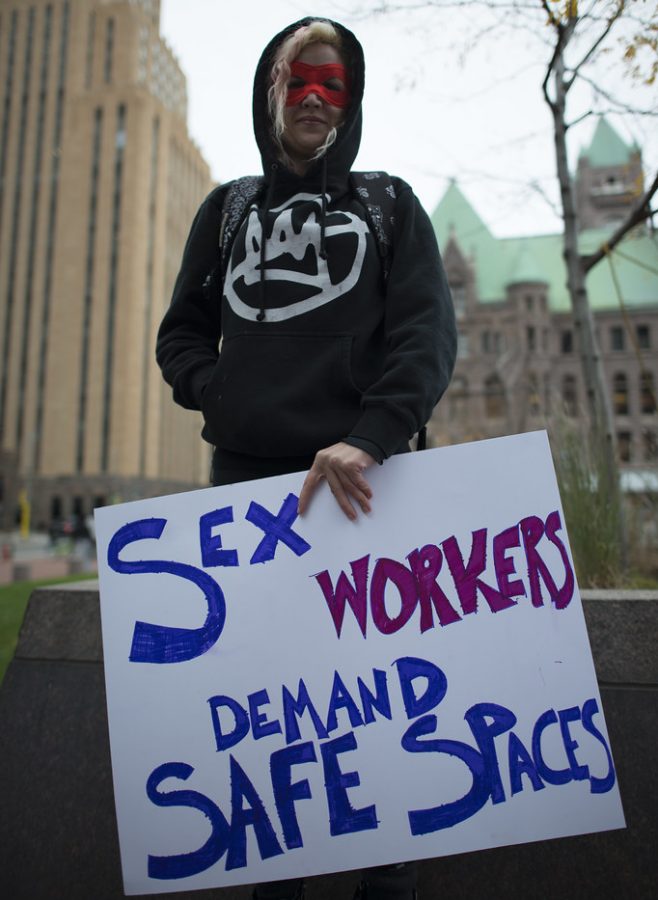 An unidentified sex worker holds a sign at the Minneapolis protest against the raid and arrests at Backpage on Oct. 6. Columnist Andrew points out a well-known bill will eliminate platforms, like Backpage, that sex workers use to safely find clients.

Winston Churchill once said, “democracy is the worst form of government, except for all other forms that have been tried from time to time.”

Democracy hinges on the very idea that government is employed by the people, but it comes with flaws. Basing the employment of government officials on the general happiness of the electorate can yield legislation that is not effective governing but empty virtue-signaling. Worse than that, legislation can pass that functionally acts against the pragmatic interests of the country to grandstand.

The bills were conceived when it was revealed certain websites, specifically backpage.com, were being utilized by child sex traffickers. Then erupted a clamorous assemblage of those demanding legislative action to dismantle websites that harbor sex workers.

Prominent figures, like Ivanka Trump and Amy Schumer, worked together, for once, to conceive a solution. Congress was swift in drafting up legislation and moving it from committee to the chamber floors. On Feb. 27, 2018, the FOSTA-SESTA package was passed in the House by a vote of 388-25. On March 21, 2018, it passed the Senate by a vote of 97–2.

Prior to the bill’s bipartisan passage, however, there were ample voices opposing this package. There were those decrying the bill for censorship, claiming the bill’s restriction on internet freedoms were flagrant violations of the First Amendment.

But most critics of the package were those with expertise on the sex worker industry who believed child sex traffickers would be left unaffected, while sex workers would be needlessly debilitated. One study concluded when comparing violent crime statistics before and after the implementation of Craigslist’s “Personals” section, where sex workers could find clientele, the total female homicide rate had dropped by 17.4%.

FOSTA-SESTA’s passage did just that: It killed a safe medium for consenting sex workers to find clientele. Websites like backpage.com gave women the opportunity to cut out the middlemen —  pimps — and find patrons themselves. Because of that, sex traffickers have been, as ReplyAll’s PJ Vogt puts it, the “cockroaches that survived the blast.”

Consensual sex work will exist in the world no matter what action Congress takes. But without a safe medium for consensual sex workers to use, they have to return to the streets, where they are all but guaranteed to be contracted by abusive, shady men who would otherwise be flagged on a website.

One report shows these violent men become more tame when using a site rather than picking women off the street, perhaps due to increased accountability on the part of the patron. The same report asseverates that during a period in which Rhode Island relaxed its prostitution laws, overall STD rates dropped and the reported rape rate did as well.

The “world’s oldest profession” is also the world’s most dangerous one. For women, prostitution bears 200 deaths per 100,000 workers. The next most unsafe job, liquor store attendee, bears four deaths per 100,000.

Does brute-force censorship fix sex trafficking? No. But research has suggested decriminalizing prostitution, like in New Zealand, could all but eliminate violence and exploitation that is routinely exhibited in the industry. Amnesty International has produced studies that support this conclusion.

Today, over a year after the passage of FOSTA-SESTA, some of these experts’ fears have been validated. Without backpage.com, an important tool to law enforcement in tracking sex-trafficking, at least one police department has admitted the difficulty to trace it in the website’s absence.

Before its passage, the Justice Department warned eliminating websites for sex workers would make it harder to prosecute traffickers and since have found that to be true. A proponent of the bill claimed FOSTA-SESTA’s implementation has eliminated 90% of sex-trafficking ads, a claim that received three Pinocchios by the Washington Post. Negative effects were seen within weeks of the bill’s passage.

FOSTA-SESTA is a terrible example of responsible governance. It was not grounded in empirical studies; it was born of impulse. It was a poor solution to real problems, including violence against women and sex trafficking.

Just because a bill is bipartisan or supported by the public does not signify good legislation. Congress virtue-signaled, passing a seemingly innocuous bill to curb child sex trafficking, and it ended up harming already vulnerable people. Government, when done right, can be incredibly effective at problem-solving; but it needs to pursue the truth rather than reelection.