Opinion | Veganism: to hate or not to hate 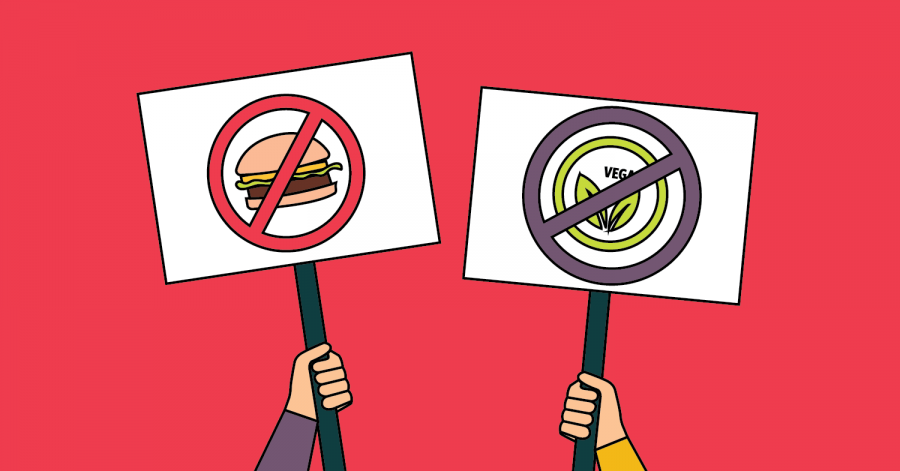 Publicly admitting you’re a vegan is a risky move. You’ll either be greeted with open arms by your vegan kin or be disparaged by people who hate the movement. It inspires controversy within it and without.

Veganism’s issues aren’t all that straightforward. It stands at the crossroads of elitism, racism and sexism, yet at the same time it brings together sustainability, compassion and activism.

As it’s evolved over the years, veganism has diverged from strictly its original goal of “(seeking) an end to the use of animals by man for food, commodities, work, hunting, vivisection, and by all other uses involving exploitation of animal life by man,” as it was defined by the Vegan Society back in 1944.

Nowadays, veganism has emerged as a choice for those looking for a way to help combat climate change. About 20% of emissions are due to animal agriculture, mostly via the massive amounts of methane emitted by cattle farms.

In addition, documentaries on the mass abuses of the meat industry like Food, Inc. or Cowspiracy have exposed the horrible conditions mass industrial farms impose to maximize profit. These films have shocked even ardent meat-eaters into a reluctant change in diet, and they have helped normalize the vegan diet, pushing a fringe movement into the mainstream.

Part of the hatred likely stems from the perception that vegans’ refusal to eat meat is a condemnation of those who choose to. This is not necessarily a false perception, as veganism is not a passive lifestyle choice for many. It’s a form of activism, and it’s about speaking up for animal rights and doing your personal best to not support animal abuses. For many people, this involves educating others’ on the reality of the meat industry, often in the hopes of converting a new vegan.

Furthermore, the concept of veganism often forces people who simultaneously love McDonald’s quarter-pounders and cows to confront the reality of what they’re eating. The consumption of meat has become so removed from the production of it that most people don’t really think about the series of events that led to their chicken dinner. No one wants to be reminded that the nuggets they just ate used to be a cute little baby chick.

However, criticism of the movement doesn’t stem just from those on the outside. As veganism goes mainstream, the face of the movement has increasingly become upper-class white women with carefully curated Instagram accounts gracing the covers of cookbooks on starting your new paleo diet or going raw. The activist spirit of veganism has morphed into finger-pointing and profiteering.

One staple of modern (white) veganism is taking products people of color have been making and eating for centuries, making them less flavorful, rebranding them, jacking up the price and selling them as a revolutionary new snack. Another is declaring the sustainable and thoughtful hunting practices of indigenous tribes across America are equivalent in blame and responsibility to commercial hunting and slaughter.

At its core, veganism seeks to end the rampant exploitation of animals by humans. Yet on its surface, veganism has diverged entirely from dismantling the systems that promote such excessive consumption. It’s become a lifestyle marketed toward the rich and bored who want to feel like they’re doing something.

Groups like Veganism of Color are combating the rise of this kind of commercial veganism by bringing together vegan people of color and focusing on activism, compassion and genuinely accessible veganism. The concept of cruelty-free eating is not new, and it definitely wasn’t white people who invented it. White vegans need to start remembering that.