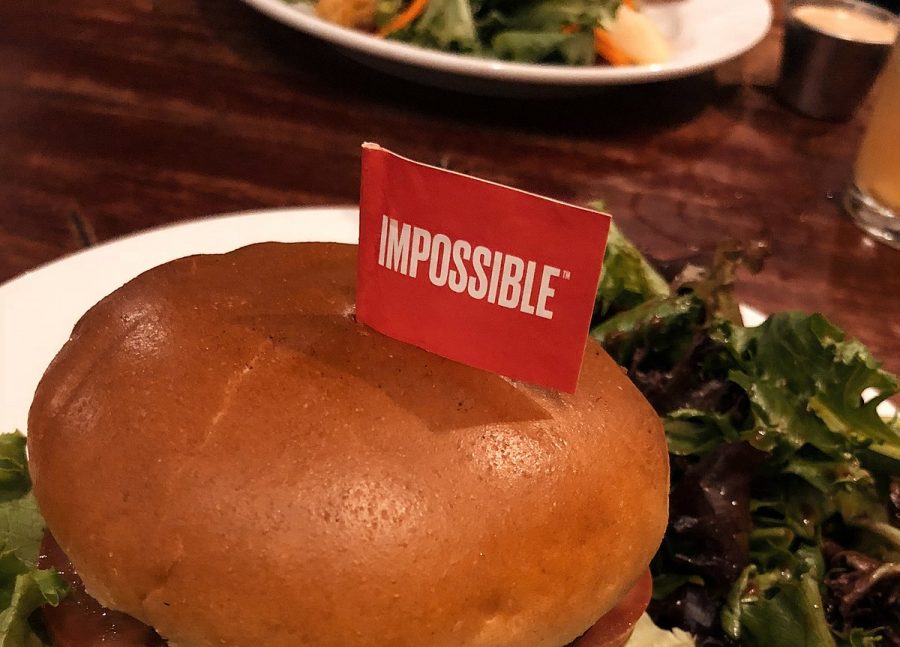 The Impossible Burger, a vegan burger with heme harvested from soybean roots to look, feel, and taste like beef, as prepared by Hell's Kitchen in Downtown Minneapolis, Minnesota.

It is beyond doubt the United States is a meat-loving country: In 2018, America consumed over 200 pounds of meat per capita, and if that number doesn’t give you a clear picture, think about the hype over the Popeye’s chicken sandwich only a month ago. You can feel the love when it drives a hundred-million-dollar fast-food franchise out of stock. While it’s hard to imagine a world without meat, some startups, like Impossible Foods and Beyond Meat, are inviting us to think of a future that is both possible and beyond the world we’re used to. With Impossible Foods’ partnerships with franchises like Burger King and Qdoba, and Beyond Meat’s going public in May, the meat alternative industry seems determined to compete for a spot on Americans’ dining table.

The market has never lacked vegan alternatives for meat, but the “meatless” meat companies adopt a different business strategy. While traditional vegan meats have met the demand for vegetarians, it assumes most consumers choose vegan meat out of concern for their health. These products are designed to have higher nutrient value instead of a meat-like taste.

But the new meatless meat industry doesn’t limit itself just to health-concerned customers and vegetarians. They mainly target consumers who have the environment and ethical concerns but are at the same time meat-eaters. Their strategies are to mimic the taste of actual meat from a molecular level. For instance, the Impossible Burger famously bleeds because it has a high concentration of heme, which makes the patty juicy and less rubbery.

Thus, the former product exclusively targets vegetarians while the latter targets meat-eaters. Unlike traditional vegan meat, the new meatless meat is not exactly another option, but more of a substitute. But will the consumers be incentivized to make the switch?

First, let’s consider the retail price. According to the Bank of America analysis, the retail price for Beyond Meat burgers is $12 per pound, while the regular beef patties are $4 per pound. Beyond Meat is using price discrimination against the high-type consumer, those willing to pay more for the environment. This marketing strategy seems to be working effectively enough for them so far. But if their long-term goal is to penetrate the broader market of meat consumers, it doesn’t seem sustainable. Such a high price is not competitive for the more general group of meat consumers — that is to say, meatless meat is not a perfect substitute for meat for that broader market of meat consumers, which generally doesn’t value the environment as much as their former niche market. In my opinion, Impossible Meat is smarter than your run-of-the-mill meatless meat company in that it doesn’t have retail sales in stores. Instead, it partners with many franchises and uses its established scales of production.

But the pricing is understandable since the company needs to recoup its investment in research and is a member of a young industry. One line of thought believes when the industry establishes its economy of scale, the price will be lower. This is certainly one way of thinking, but the other is less promising: with its multiple ingredients and complicated production process, the production of artificial meat naturally costs more than the traditional meat. This needs studies to determine the exact cost margin because more consumers will weigh the environmental and ethical considerations against the product’s cost to make decisions.

Taking it to a macro standpoint, artificial meat certainly has environmental benefits. According to the EPA, the carbon emission from agriculture, mostly from livestock, composed 9 percent of 2017’s greenhouse emission. While this is not a huge chunk, it is certainly something we can act on without considering other causes of those emissions that can’t be scaled down easily (transportation, electricity, etc.). This will give the government incentives to shift subsidies to this industry and away from traditional animal agriculture to help to drive down the cost.

But that seems to be in the distant future. The price of meatless meat is still expensive and unattainable for most Americans on a retail basis. It appears that, in revolutionizing our eating habits, we have a long way to go.

Yutong is a senior in LAS.