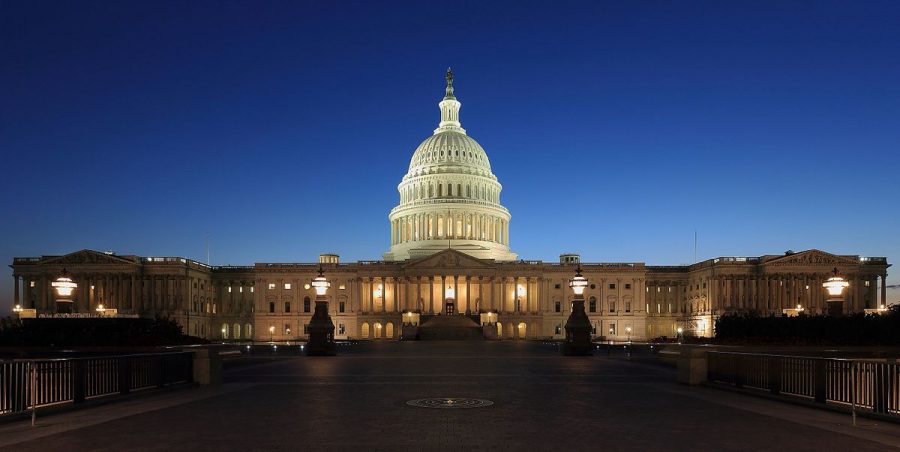 The Captiol Building at night. Some conspiracy theorists believe the current elected government is a front for the “deep state,” a collection of people who actually run the country. Columnist Andrew berates political figures for lending credence to these conspiracy theories.

The lengths a human being will go to internalize and defend their beliefs is one of the great failures of the evolution of human psychology.

In the past few years, America has witnessed a surge of falsehoods in the media. There exists political “spins,” using bad rhetoric to deflect negative publicity, and then there are outright denials of reality. This is most clearly seen through the marriage of the far-right and conspiracy theories, specifically the “deep state” conspiracy theory.

Conspiracy theories are normally thought of as fun counterfactuals that give rise to the imaginative mind and serve as a reminder that aspects of the world can still be mysterious and mythical. There existed an incredibly enjoyable trend this year surrounding the conspiracy theory that aliens are stored in Area 51.

Although some conspiracies are of innocent nature, one soon comes to realize that the majority of them, especially when taken seriously, can actually hurt people. Conspiracy theories that fuse with politics, such as “QAnon” or “Pizzagate,” are enough proof of this, but the “deep state” is perhaps the best example of the harm conspiracy theories can bring upon democracy.

The “deep state” is defined differently in many circumstances, but in U.S. politics it generally refers to a belief that the entire legitimately elected U.S. government is secretly an illusion, a smokescreen that hides the real government whose puppetmasters are crony corporate leaders, corrupt oligarchs and malevolent media elites.

It is the laziest denial of truth, and yet, it is still one that is legitimately catching on and being utilized by political actors such as the Trump administration, which has recently been getting caught in scandals more and more often.

The conspiracy theory used to be cited only by a small fringe minority. Conspiracy theorists like Alex Jones of “Infowars” commonly misattributed violent attacks to the “deep state,” such as 9/11, the Sandy Hook Massacre or the Boston Marathon Bombing. It would endlessly circulate on problematic forums, but never leave the cesspool.

President Donald Trump has cited the “deep state” as the scapegoat for a myriad of his issues. But it is not surprising to find the egotistical founder of “birtherism,” who routinely lies and campaigned on “draining the swamp,” invoking this conspiracy.

It is unfortunate that this conspiracy theory has seeped its way into the mainstream. It is madly irresponsible that certain Republican congressmen, who, unlike Trump, have mostly adhered to political norms and precedents, would now rather peddle the “deep state” garbage than simply admit the president has made a mistake.

It is even more maddening that these congressmen are familiar with the inner workings of government and know better than to promote this baseless conspiracy theory to their constituents. They are certainly aware of the false nature of this theory, and yet, they continue to lie. It’s a betrayal to their oath of office.

If the “deep state” continues to be commonly invoked, it could undermine the confidence and legitimacy of U.S. institutions, thereby damaging the health and security of American democracy. There is also fear it could be cited to justify government suppression of dissent.

No one will ever receive the desired release of emotion that is an admission of guilt by an opposing political figure. The opponent will always prevent their at-risk worldview from shattering by proclaiming “deep state” interference. People would rather completely change their perception of reality if it was more in agreeance with their beliefs than accept new facts that challenge or disprove the positions they already hold.

American democracy is not threatened by a grand shadow government; it is threatened by those accepting this faux reality whose acceptance risks the destabilization of American’s democratic foundation. The “deep state” is not the problem, but the deep state of denial is.