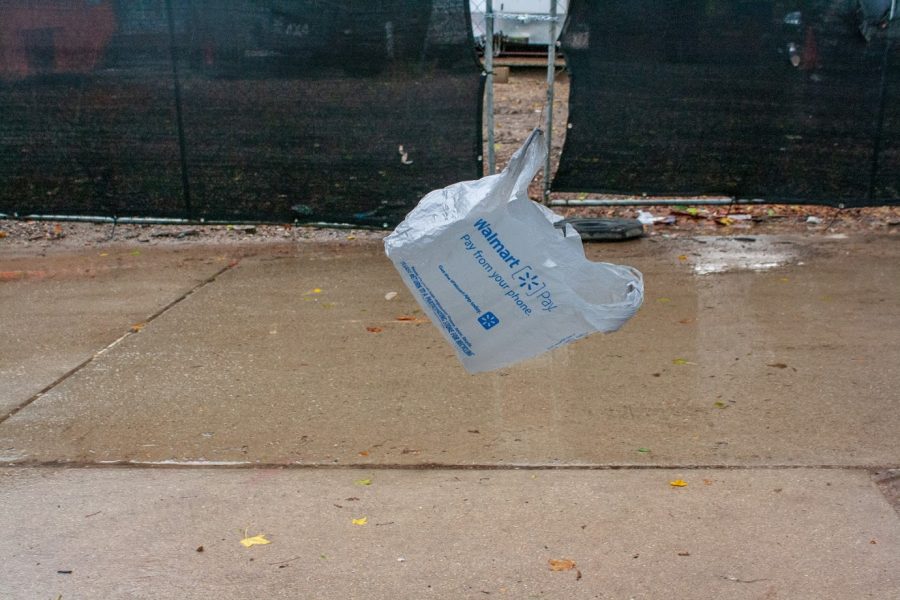 A Walmart bag flies in the wind Friday evening behind Busey-Evans Hall. Columnist Tommy challenges students to use fewer plastic bags when they shop or even when ordering food to go.

After a scathing speech to the U.N. from a certain Greta Thunberg and the series of public protests that have followed, the issue of climate change has finally taken center stage in the global discussion of our future. The question is, how does little old Champaign fit into Operation: Save the Planet?

I wish we all had some extra ozone lying between our couch cushions we could chip in for the cause. But before we worry about rebuilding what has deteriorated, we should remember it’s just as important to cut back.

So let’s start off small: Please, for the love of Pete, don’t use plastic bags.

No, they aren’t recyclable. At least, not easily. Only about 9.5 percent of all plastic actually gets recycled, and it doesn’t help that as many as 100 billion plastic bags were used in the United States back in 2009. What doesn’t get reused usually ends up in landfills, rivers or oceans, where it’ll remain for as long as it takes to deteriorate. That could take hundreds of years.

But there is hope! Several cities have driven down the use of plastic bags by imposing taxes on the items in stores. Chicago, which, in 2017, initiated a 7-cent bag tax, saw a 42% drop in the number of plastic bags taken from large grocery stores within a month of the tax taking effect.

Here’s what’s even more interesting: After flat-out banning single-use plastic bags, the city of San Jose noticed while some people made the shift from plastic to paper bags, its residents more often resorted to using no bags at all.

If a plastic bag isn’t worth 7 cents to you (which, for many people, it clearly isn’t), then how could it be worth the risk of inadvertently contributing to the amount of waste in our waterways?

Nobody’s selfish for wanting the convenience that plastic bags provide, albeit inefficiently. Besides, how can you help it if the cashier starts to pack your groceries in a tidy plastic bag before you can say otherwise?

I’ll admit, it takes some courage to flip that interaction on its head and ask for your reusable bags to be filled instead. It’s only a little bit of courage that you need, but it’s a nonzero amount nonetheless. It might feel awkward to turn a plastic bag down, or if you’re like me, you may feel bad about being a “fussy” customer.

I hope Thunberg, however, would agree with me that it’s about time we start getting fussy.

Think about bringing a reusable bag with you on your next trip to the store or taking your Subway sandwich with just the wrapping paper. No pressure or anything, but your decision could affect the next hundred years.

Tommy is a junior in Engineering.