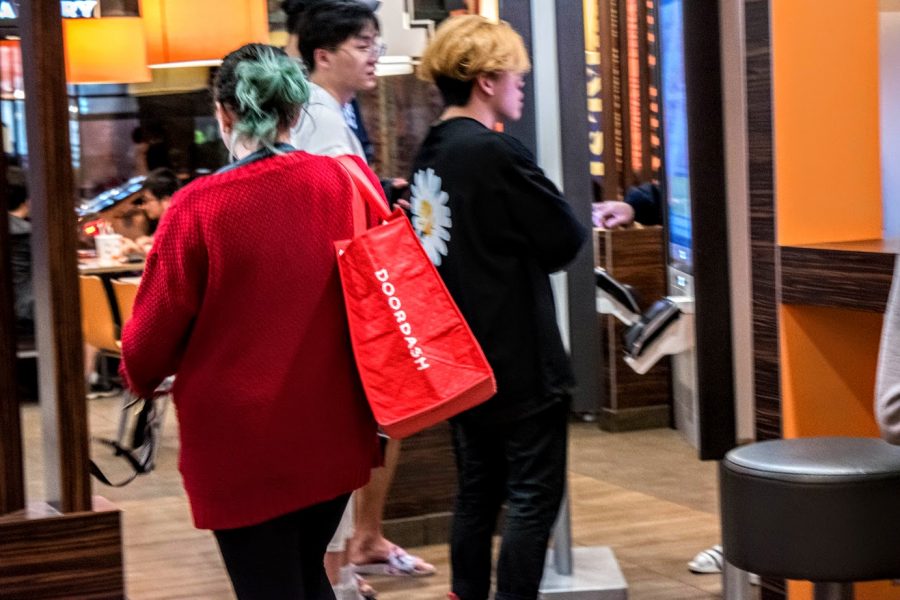 A DoorDash driver picks up an order from the McDonald’s on Green Street on Oct. 5. Columnist Dylan claims food delivery businesses contribute to mental and physical unhealthiness.

Grubhub, Uber Eats, DoorDash, goPuff. The options are many, but the results are the same. More and more people are living an unhealthy and alienated lifestyle.

As monumental tasks such as going outside and interacting with other people give way to modern convenience, food delivery becomes an increasingly enticing option. Why brave the elements or the streets when one could simply order food from their computer and have it arrive in half an hour without walking more than 10 feet? While this may seem appealing on the surface, it is clearly a reflection of our growing social ills.

Food delivery started rather benignly. Pizza delivery has been around since at least the 1960s, with Domino’s Pizza claiming to have offered the service since its inception. However, pizza delivery was and is usually a social activity. The most popular days for pizza delivery are the days of large gatherings such as New Year’s Eve, Superbowl Sunday and the day before Thanksgiving.

But in the last five years or so, food delivery has greatly expanded in the United States. In 2013, DoorDash was founded, and in 2014 Grubhub began food delivery services.

This was no longer intended as an offering for large gatherings of people to easily obtain food, but now as a way for individuals to order food without having to leave the house or interact with another person beyond grabbing a container from their hands.

This is not meant to decry the modern age as is altogether terrible. On the contrary, I think the 21st century has afforded us countless luxuries which should not be taken for granted. But every age has its issues to overcome, and clearly, people becoming increasingly atomized and self-contained is one we face every day.

This is not meant to berate food delivery workers or customers either, but is a structural critique of the industry at large.

While this seems like a victory for convenience, it is also a victory for social alienation. Now food, groceries and entertainment find themselves at your doorstep, and face-to-face human interaction is at an all time low.

At what point does convenience become a curse? How much are we willing to sacrifice just to make life a little easier? Is leaving the house such a consequential task that it is worth forgoing altogether?

Not only is it alienating, but it promotes unhealthy eating and a sedentary lifestyle. The trip to grab some food isn’t the L.A. Marathon, but it is a form of exercise that can at least partially justify the unhealthy food we get when we go out to eat.

On top of all this, it is far from economically efficient. Most food delivery services offer a sliding scale of delivery fees anywhere from $5-$8, plus a tip if you are so inclined. This can as much as double the price of a single order of food for one person.

Additionally, the food will likely be cold by the time it arrives anyway. If there is one universal truth about fast food (besides being terrible for you), it is that it ages wretchedly. It can go from decent to inedible in less than an hour. Time is precious when it comes to fast food, and delivery consumes a large portion of that.

It is easy to imagine a future where we sit inside, have food delivered, watch Netflix and work all day, slowly forgetting other people exist. These companies certainly would not object. What is more profitable than a lifestyle of endless gratuitous consumption? But, at the same time, what is more hollow?

So the next time you have a craving for cheap fast food, I urge you to cook, go out with a friend or, at the very least, please, please put on clothes, step outside and take a walk. You might just see something worthwhile. Or at least get your steps in.