Opinion | University will always be home to dramatic change 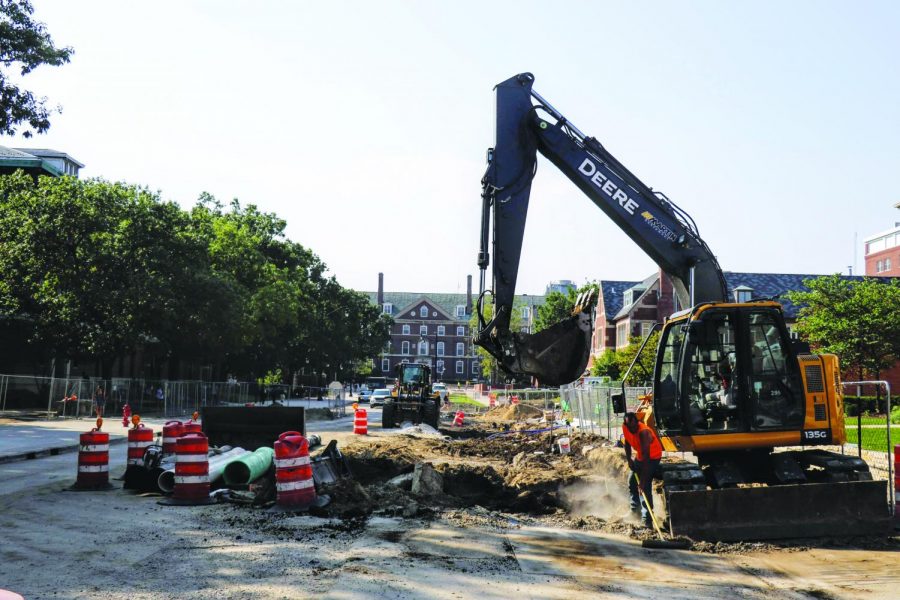 Construction on the corner of Wright and Chalmers Streets on Sept. 20. Columnist Tommy encourages readers and students to think of the University nostalgically amidst the constant changes.

Homecoming has been a revered tradition at Illinois for over 100 years, and it’s on track to last at least until we’re the ones coming home.

The question is: What home will we, as alumni, come back to?

My parents went to the University when it didn’t have a building above three stories. They make sure I’m well aware of that every time they visit, and last weekend was no exception. This past Homecoming felt less like an opportunity to relive memories, and more like a challenge to see where they all fit into a new landscape.

Some transitions have been more obvious than others. A handful of highrises now dominate the “skyline” (if it can be called one), and upscale chain restaurants and retail stores lure pedestrians off Green Street. Champaign has undoubtedly leapt into the modern era; there’s a lot less brick, and a lot more steel and glass.

Other changes have been, more poignant. My dad had me drive the family down Daniel Street to take a look at his old house, only to see that it had been torn down, supposedly to make way for another apartment complex. He said he could’ve sworn it was standing a year ago when he last checked.

Change can be a weird and alienating event, which is odd considering how many things we now consider as integral to the University were once brought about by change.

Last Saturday, the Illini beat the Wisconsin Badgers in a stadium that did not exist 100 years ago. For a brief time in 1923, it was just a couple slabs of concrete (bulldozer, which happens to remain buried underneath the stadium to this day, but that’s a different story).

Yes, change can even work against our sentimentality. This homecoming weekend marked the last for the current location of the locally renowned bar KAM’s, a staple of University culture since 1975. The goodbye was tough for everyone, particularly for the bacteria thriving off of the floor. This farewell, however, was more of a formality. KAM’s isn’t really going away — it’s moving, right next door to the Papa John’s on Green Street, to be exact. Different building, different generation, same attitude.

In a strange way, could this rowdy bar be … a metaphor? For something as abstract and poetic as the perseverance of our school spirit?

Change isn’t just a recent trend for Champaign. The history of the University can be defined by constant, dramatic transformation. Sometimes we welcome it, and other times it invites itself onto campus. In all cases, it’s probably inevitable — there will be a new KAM’s, a new Mechanical Engineering Building, a new Target, a new design center, a new Wright Street.

That doesn’t mean, however, change will carry our memories out to sea.

This is the last time the University will look like this. When it’s time for us to come back as alumni, let’s share what we remember about it.

Tommy is a junior in Engineering.