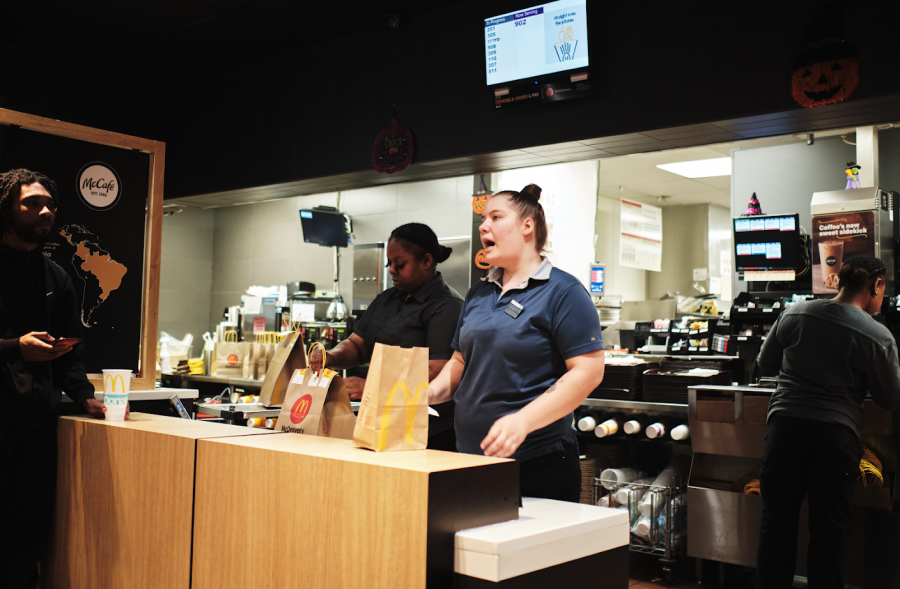 Two McDonald's employees call out for order numbers while a customer waits at the McDonald's on Green Street Thursday evening.

For many teenagers and young adults, the obvious goal when searching for a first job is something that requires no experience and no education. Companies often see this as an opportunity to take advantage of people who don’t have very many options. After all, it doesn’t take too much skill to perform the duties expected of a cashier or a waitress as opposed to jobs that require more extensive training.

However, even for the generally undemanding work these employees do, companies still manage to give their employees much less than they deserve. Aside from being incredibly overworked and extremely underpaid, people employed with unskilled work face a much deeper issue they could end up carrying with them forever — a poor work ethic.

You may have heard the phrase “a chain is only as strong as its weakest link,” meaning a team of people can only perform well if every individual person does.

However, for a team of fast-food workers with careless management, the saying couldn’t be more untrue. Rather than building a great team of hardworking people as they advertise to potential new employees, the management in these companies often tends to push their “weakest links” to the side. They’d rather just have their less-skilled workers do the grunt work while they focus on developing their “more promising” employees. As a result, these neglected employees wind up feeling undervalued in the workplace. This can cause major self-esteem issues, which then affects work ethic.

Not only do they disregard and mistreat certain employees, they actively seek out the ones they know they can neglect — first-time workers with absolutely no experience. Without the experience, new employees don’t know what to expect, and, more often than not, they don’t know what they deserve. That gives management leverage to mold new employees however they please, and unfortunately, they usually don’t have young workers’ best interests at heart. They aren’t concerned with creating diligent workers with strong work ethics for the future. Big companies rely on inexperienced, impressionable young people they can take advantage of to make big money for the people on top.

Because of their scheme, companies now have a bunch of employees who are doing work they don’t enjoy or don’t get many transferable skills from just because they need the money or the experience. In fact, the only thing they’re probably learning is that the only reason to work is for the money. That idea, in turn, produces people with no true internal desire to work. Although money is a very necessary incentive, it takes much more than a paycheck for a job to really be worth your time.

We’ve all been told before — in life, you’ll have to do things you aren’t going to like, and that includes having a few terrible jobs. But when you do meaningless work for low wages in an environment that normalizes poor treatment of employees, the payoff isn’t great. Rather than providing mentorship for young people looking for a healthy introduction to the world of work, companies are instead taking advantage of them and destroying their work ethic and ambitions for good measure.