Opinion | Hong Kong debate is not as straightforward as it seems 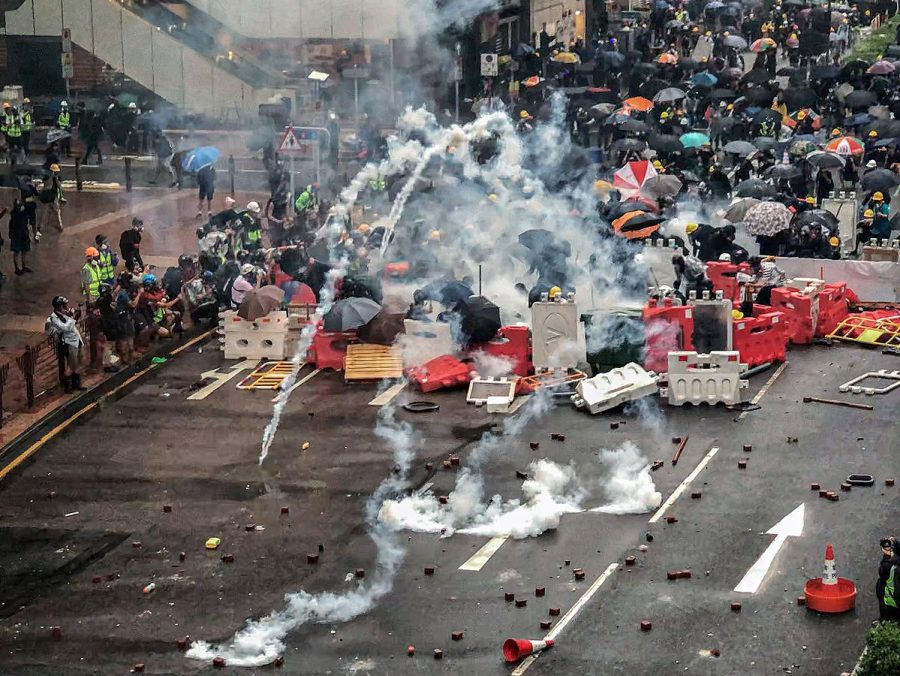 Protesters and the police engage in a standoff at Yeung Uk Road on Aug. 28. Columnist Yutong pushes people to acknowledge the social and political significance of the issues in Hong Kong before commenting.

Some ideas are universally recognized: the right to life, liberty and property; the freedom of expression. However, these estimable ideas could only provide valuable insights and practical guidance if the world was a much simpler place.

Unfortunately, we don’t live in a world where everything can be definitively judged as right or wrong. Our opinions bear weight.

The recent protests in Hong Kong are an example of events that certainly deserve careful analysis, rather than naive judgement. After all, it is easy to support universal values like freedom, but not all actions and comments in the name of universal values are legitimate and viable.

At the end of the day, the cost of typing some words online is low, but the price paid by people on the ground can be high.

But speeches from public figures like Daryl Morey, general manager of the Houston Rockets, seem to fall in the camp of snap judgements. While the freedom of expression allows for speech in most contents and forms, it is self-defeating if people don’t use it responsibly. It’s a simple logic: When people speak, they expect something to come of their speech. If they dislike what comes of their speech, then it seems they didn’t care too much about their own speech in the first place.

In this situation, it seems hypocritical to make an argument about human rights without first understanding what one is actually endorsing. Hong Kong’s problem is more than a simple value judgement; it is a complex political issue that relates to Hong Kong’s unique economic and political status. It is doubtable that anyone with a real concern for people’s welfare with more than a naive understanding about the situation is absolutely sure of their stance.

The chaos in Hong Kong doesn’t result from unilateral police oppression. The protest has moved from peaceful rally toward a violent demonstration.

In early July, the protesters stormed and vandalized the Legislative Council Complex of Hong Kong. They threw bricks, paint bombs and bottles at police.

In August, the protestors paralyzed the Hong Kong International Airport and attacked a mainland journalist. The protestors have also begun to use petrol bombs to attack the police. Mainland banks and travel agencies are being targeted and vandalized.

Granted, the riot police were also firing back tear gas and rubber bullets. One of the most prominent financial hubs in the world has become a literal battle field. Of course, some groups are engaging in peaceful protest. But those who support the protest regardless of groups will also be endorsing and encouraging the violence.

It doesn’t seem the chaos will end anytime soon. The protestors have five demands for the Hong Kong government. These include the complete withdrawal of the extradition bills; the retraction of the characterization of the protest as riot; the exoneration of the arrested protesters; the establishment of independent committees to investigate police misconduct and the resignation of Carrie Lam, the current Chief Executive of Hong Kong and universal suffrage.

The first demand is the direct cause for the entire protest. An extradition agreement was proposed between mainland China and Hong Kong and was interpreted as an exacerbation of the Chinese Communist Party’s control of Hong Kong.

Although the extradition bill has been officially withdrawn, the protest still continues because Carrie Lam has taken a strong stance against the last four demands. This makes sense since not all arrested protestors are innocent, and it is politically imprudent to let protest push through substantive legislative changes when there is legitimate political procedure available to do so.

Finance and tourism are the main pillars of Hong Kong’s economy, and both of these industries that require political stability might suffer in the long run.

A report by Goldman Sachs estimates at least $3 billion in investment has shifted from Hong Kong to Singapore since the beginning of the protests. Global companies, banks and law firms are devising plans for worst case scenarios. With the hostility toward mainland China, the flow of Chinese tourists, which composed two thirds of all tourists in Hong Kong, dipped about 55% during a national holiday. This will only worsen the economic situation in Hong Kong which is already fraught with sky-high housing prices and enormous income gap.

The issues in Hong Kong have much more social and political significance than a mere rally. Speech is a powerful tool, and all of our speech have some consequence one way or another. Therefore, it needs to have limits and people should be more careful in making comments to avoid exacerbating the situation.

Yutong is a senior in LAS.