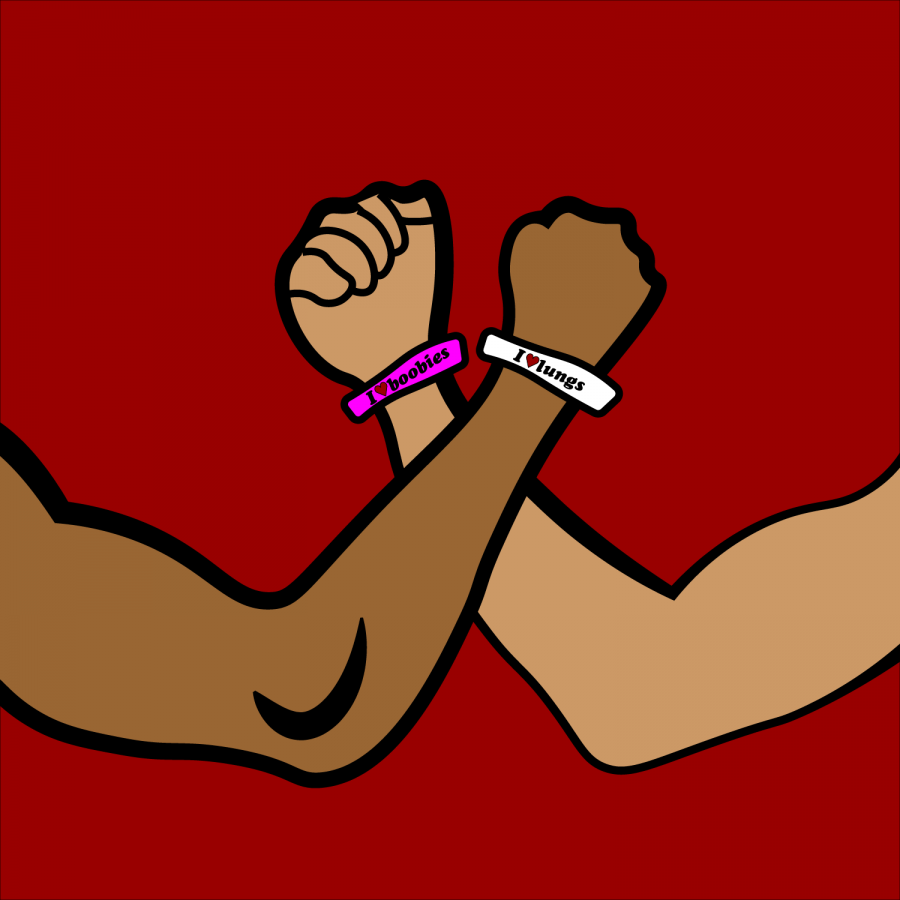 Breast cancer is extremely common and affects more people than any other cancer in the U.S. The thing is, the charitable giving for this disease outpaces all other cancers disproportionately in relation to their deadliness.

According to Bloomberg, in 2017, lung cancer received only 20% of the donations breast cancer did.

When’s the last time you heard about a campaign for the eradication of ovarian cancer? What about bladder or kidney cancer? There aren’t any highly publicized months for these lesser-known illnesses, and consequently, there isn’t nearly as much charitable giving to research foundations for them.

Back in 2011, I was in sixth grade, and “I heart boobies” bracelets were all the rage. All the boys had them. And believe it or not, they didn’t care too much about breast cancer. I have a hunch “I heart lungs” bracelets wouldn’t have caught on quite as well.

Our society sexualizes women so much that it even sexualizes the diseases with which women are likely to be diagnosed. Women get lung cancer, too, but that’s not easy to fundraise for. The charitable marketplace seems to find diseased breasts more of a novelty than diseased lungs.

The general rule? The less “appealing” the diseased body part is, the less funding it receives. In a similar vein, the more likely it is the cancer was caused by lifestyle choices such as smoking, the less likely it is that particular cancer will receive public empathy and support.

Cancer is scary, no matter what part of the body it claims. Our charitable giving should reflect not social stigmas or trends but our desire for nobody to ever have to suffer or die from the disease ever again.

It’s imperative with all charitable giving though, to research the organization before writing a check.

Susan G. Komen for the Cure, perhaps the most well-known breast cancer charity, is so large and has such high costs that only 77.4% of its donations go toward breast cancer research, according to Charity Navigator. The organization has also received heat for the salary of its CEO despite decreasing donations, clocking in at $565,000.

The American Cancer Society, shockingly, has even worse administration to donation ratios: It spends only 74.2% of donations on cancer research.

The Lung Cancer Research Foundation, on the other hand, spends 81.4% of donations on lung cancer research. Its smaller size lends to lower operating costs.

Brands are expensive to maintain; the charities you’ve heard of, that host mega-publicized events and have tastefully-made commercials on TV, likely don’t spend as much of your donation as you would like on concrete research and services to cancer patients.

The moral of the story: Every type of cancer is equally terrifying and devastating for anyone affected by it. Fundraising for cancer research, therefore, should never be a popularity contest based on trends.

Next time you give, consider funding the research that is just as necessary, yet not nearly as well-funded, as breast cancer.