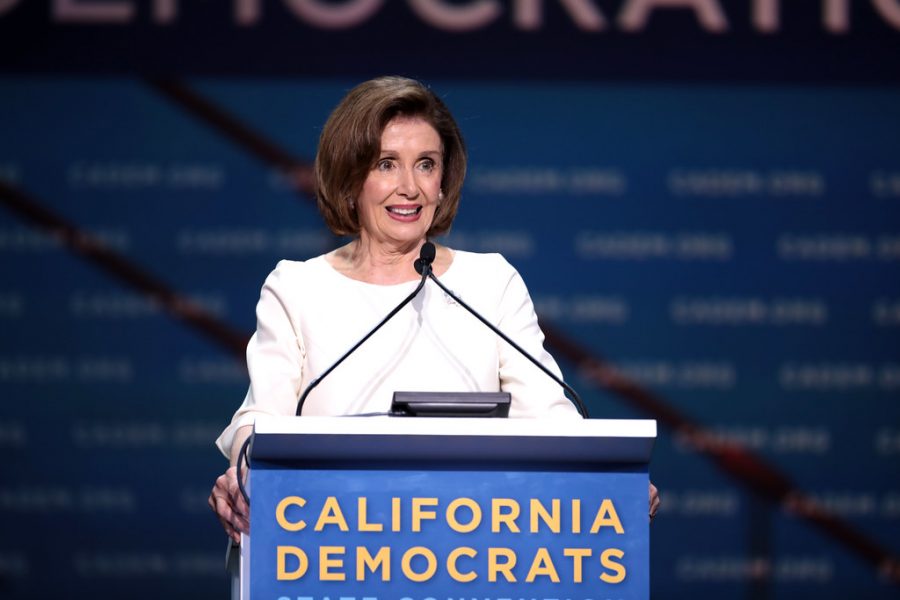 Speaker of the House Nancy Pelosi speaks with attendees at the 2019 California Democratic Party State Convention at the George R. Moscone Convention Center in San Francisco, California on June 1. Columnist Andrew urges “The Squad” to recognize Pelosi’s mandate to lead the Democratic party.

After the 2018 midterm elections, it was clear the wide ideological array of Democrats elected to the House of Representatives would present a challenge to Democratic leadership.

The counterweight to Speaker of the House Nancy Pelosi’s moderate circumspection is “The Squad,” a group of four freshman members of the House, Reps. Alexandria Ocasio-Cortez, Rashida Tlaib, Ilhan Omar and Ayanna Pressley.

They are young, former activists and, for that reason, have an exceptional understanding of how to use social media to influence public opinion and promote their progressive ideologies. They are also not shy of the spotlight, but rather very vocal. Albeit tech-savvy and confident, they lack a fundamental understanding of how the political system works.

Legislators and activists are both crucial to a functioning democracy, but they possess different responsibilities. An activist’s duty is to provoke outrage and conjure public support — often via emotional messaging — to pressure Congress into acting.

A legislator plays an entirely different game. The job of a legislator is to negotiate with other legislators who represent different interests. It is not to fight tooth-and-nail, it is to concede certain demands to find a flexible middle ground and pass legislation that is perhaps not ideal for any one legislator, but agreeable to all parties.

It also is a question of professionalism. When members of “The Squad” cried in a congressional hearing, they lacked an understanding of their audience. That method of appeal would be persuasive at a political rally but is less effective in a congressional hearing, where members of Congress have different expectations regarding professional conduct and delivery of information.

Pelosi, a career politician, relies on a measured parley to whip votes in Congress, whereas it appears as if “The Squad”  feels it can use social media power to provoke enough outrage to bully legislators into adopting its opinion. The former has historically been more effective.

Pelosi was correct in saying “The Squad”  is just “four votes,” insinuating that if it insists on Twitter call-outs to win legislators instead of careful diplomacy, it will stay four inconsequential votes and remain unable to acquire legislative wins.

Additionally, members act more like activists than legislators in their prioritization of symbolic gestures to pragmatism.

Rep. Ocasio-Cortez voted against a border bill that provided money to U.S. Immigration and Customs Enforcement on the basis that ICE has been detaining migrants unjustly. However, Democrats who voted for the budget defended their decision by claiming the detained lose more when ICE is left unfunded than when it receives funds they can use to better conditions for those detained.

While sticking to one’s principles at all costs is noble, it is accurate to contend idealism can often hurt more people than the opposing ideology, pragmatism.

Their political naivety is not only shown through their approach to legislating but in their lack of respect for political seniority. Seniority matters, as it maintains order and values the experience older members have. As freshman members of the House, their constant quibbling with Democratic leadership undermines the respect the leadership deserves.

President Donald Trump has capitalized on the group’s frequent media presence and its vocal opposition to the Democratic establishment to frame “The Squad”  as “the new face of the Democratic Party,” sowing more division among party ranks.

Additionally, troubling remarks have hurt the party’s image. From Tlaib’s “We’re going to impeach the m———–” to Omar’s “Some people did something,” they seem unaware of the impact their public statements have. They should understand people will purposefully misquote them when they are ambiguous or not cautious.

Another example is when Ocasio-Cortez declared Pelosi “has a problem” with women of color after sparring with her, prompting Trump to defend Pelosi. This likely emboldened those who believe the word “racist” has cheapened to a meaningless term to lob at opponents.

Members’ naivety to the legislative process and disregard for political norms make them more of a liability to the party than an asset. Their blind idealism and inflammatory rhetoric will continue to breed adverse effects on Capitol Hill until they become more politically adept. Although they appear on Twitter frequently, they will remain small fish in a big pond until they learn to play nice.