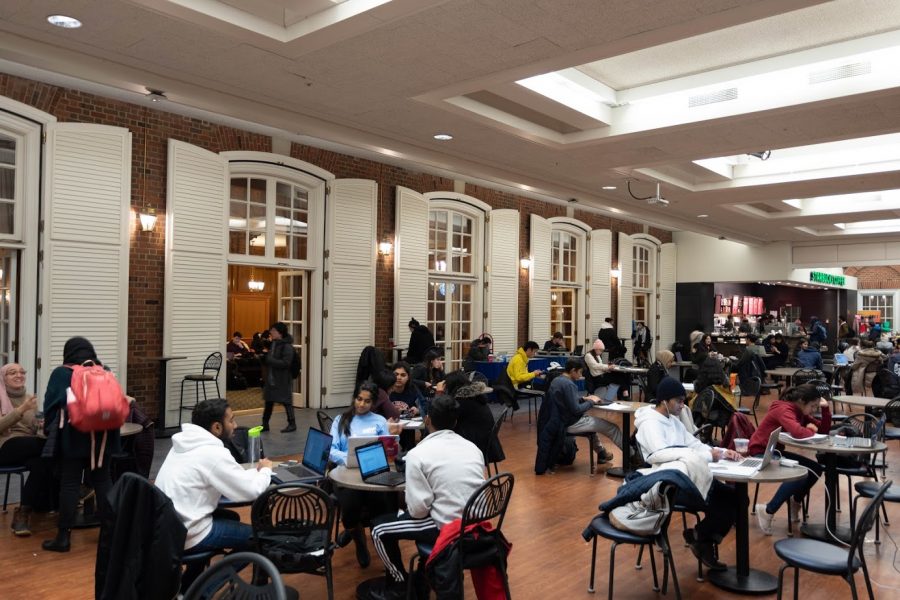 Students hanging out with their at the Illini Union’s Courtyard Cafe on Monday.

As a kid, making friends was easy. You met someone, expressed your interest in something about them and decided you’d form an alliance.

But as we grow older, it becomes a bit more complicated. There are social codes that we all must adhere to, however subtle they may be. The older we get, the more we seem to prioritize respecting each other’s personal space.

While giving people physical distance isn’t a problem, there is no need to be so emotionally closed off to people — even strangers.

My most recent spontaneous friend-making experience was last weekend when I went to Chicago. I hadn’t booked a return ticket because I didn’t know exactly when I’d want to leave. I ended up waiting so long that most tickets from common bus and train services were sold out, so I bought a shuttle ticket from a limousine company that I had never heard of.

Everything about taking this shuttle was shady. We were supposed to wait outside of the train station and just wait for the shuttle to pull up.

I met another girl that was equally as confused as I was about the whole process, and I got her number to have someone to text in case we got separated while we waited for the shuttle. To my surprise, she texted me later that night after we got home. We talked a bit more and decided to get dinner sometime during the week.

Sharing a meal with someone entirely new was refreshing and hopeful, and it was the start of a great friendship.

Younger generations are struggling more and more to break initial barriers with people they don’t know simply because of their mindsets. We are so concerned with not being bothersome that we don’t even attempt to put ourselves out there in the friend-making scene.

A clear example of this is neighborly camaraderie. Technology has made it so that making friends must be something intentional; to form a lasting connection, both or all parties must have made that conscious decision beforehand. The very idea of knocking on a neighbor’s door and introducing yourself seems out of place and borderline intrusive.

But is it really? Getting to know the people around you can lead to increased health benefits in multiple aspects — like lowered risk of high blood pressure and the promotion of wellness. As social beings, expressing our need for connection is only natural.

This applies to things like elevator conversation and small talk with retail workers — things that are seen as mostly unnecessary. After all, small talk typically involves pleasantries and superficial topics. It’s hard to fathom that these exchanges are of any importance.

It turns out that small talk is a powerful mind exercise because of the adaptation and concentration needed to keep the conversation going. Typically, these conversations are with someone you may not have much in common with, but it’s hard to tell until you take the plunge and start talking.

Apart from making us sharper and more alert as people, the benefits of talking to new people include the potential social reward of forming a friendship. Millennials are reported as the loneliest generation, with Generation Z not far behind. With social media at our fingertips, this seems incredibly ironic.

However, social media only contributes to the idea that communication must all be formal and pre-planned. People chat briefly before getting each other’s handles on all relevant social media platforms, and plans are made well in advance with little room to spare for spontaneity.

This culture translates to real life. Social interaction is more limited than it needs to be among the youngest generations simply because we’ve all adjusted to the ways of technology.

But if this is the case, we may as well use it to our advantage. If we get over the initial block of our shyness and over-exaggerated respect for other people, all hope is not lost. Technology is on our side, but we have to remember to at least use it to develop a budding friendship.

It can be as easy as meeting someone at a train station. Someone just has to make the first move, and something great will come out of it. Become acquainted with the people you’re surrounded by. If you don’t make a best friend, at least you’ve sharpened your mind.