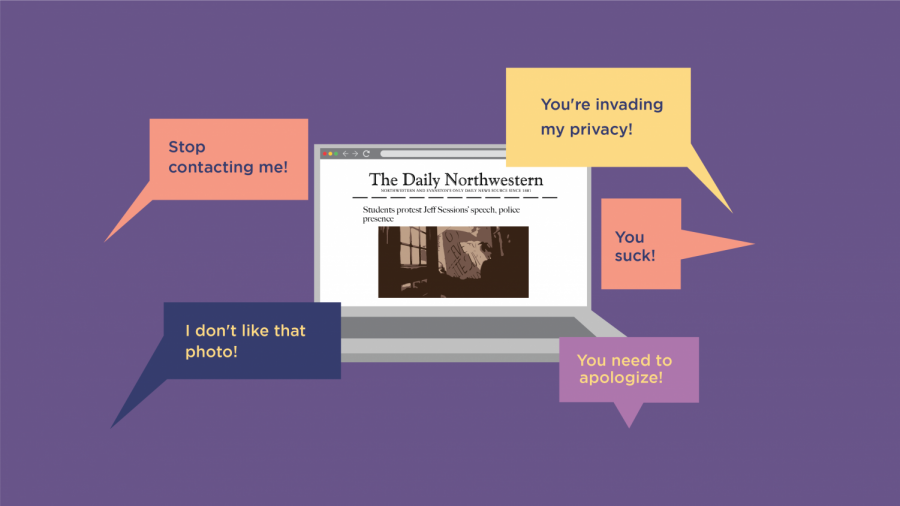 By The Daily Illini Editorial Board
November 14, 2019

Journalists must remain transparent, report facts and minimize harm. This is their mandate.

Any student or professional publication would have sent out reporters to cover Sessions and the protests surrounding him. This is news. To report on this, as is its job, The Daily Northwestern sent photographers to the protest, and some of the reporters contacted their sources through the university’s student directory — a tool The Daily Illini and many other publications utilize for student sources.

On Sunday, the Daily Northwestern released an editorial apologizing for their “mistakes.”

“One area of our reporting that harmed many students was our photo coverage of the event,” the statement read. “Some protesters found photos posted to reporters’ Twitter accounts retraumatizing and invasive.”

Attending a public protest does not only mean there’s a chance your photo could be taken, but it also means members of the media can and will ask attendees for a comment. If that is something you are not willing to be a part of, perhaps attending a public protest just isn’t for you. There was no intrusion on anyone’s privacy or “safety” for taking photos of protestors protesting.

Today, everyone is a photographer. Why should journalists, and student journalists at that, be under fire for something everyone does all the time? Sure, student photographers were sent to the Sessions protest with big, fancy cameras, but this doesn’t mean someone cannot be a photographer with just their iPhone. The protests could have easily been documented on Snapchat, Twitter, Instagram and Facebook by other attendees who don’t consider themselves journalists.

Americans should learn what journalists are — fact-reporting watchdogs. Last week, The Daily Illini published an editorial explaining the Harvard Crimson wasn’t in the wrong after covering an “Abolish ICE” protest, which resulted in student activists demanding an apology from The Crimson.

An apology is for a wrongdoing, and the paper did nothing wrong. The Daily Northwestern and other student publications should remain transparent but also exercise freedom of speech — the reason we have independent publications in the first place. Freedom of speech doesn’t mean apologizing, it means being transparent and reporting facts, which is exactly what journalists promise to do.

The Daily Northwestern should not have apologized. Instead, it should have educated those who clearly cannot grasp the amendment put in place to grant freedom to the same protestors who demanded an apology.

No, the paper should not have backed down. They had the high ground. However, it is important to remember it is a student-operated newspaper. Everyone at the paper is learning; that’s the purpose of student newspapers to begin with.

Yes, the editorial board made a mistake by caving to the demands of people without even the slightest idea of the proper journalistic procedure. But certainly, this mistake is not egregious enough to deserve the cruel backlash it received from major professional news outlets.

Journalists like Glenn Kessler and Casey Toner called the mistake “a travesty and an embarrassment” and “humiliating.” It’s great to know these media icons never made poor choices or published anything they later regretted. Comments like these are not at all constructive and do not promote learning.

The Daily Illini editorial board expected more from the leaders in our future field.

So it seems not only would those angered by legitimate reporting do well to learn some American history, but the journalists who denounced the student newspaper would also do well to remember they were once students of journalism, too.