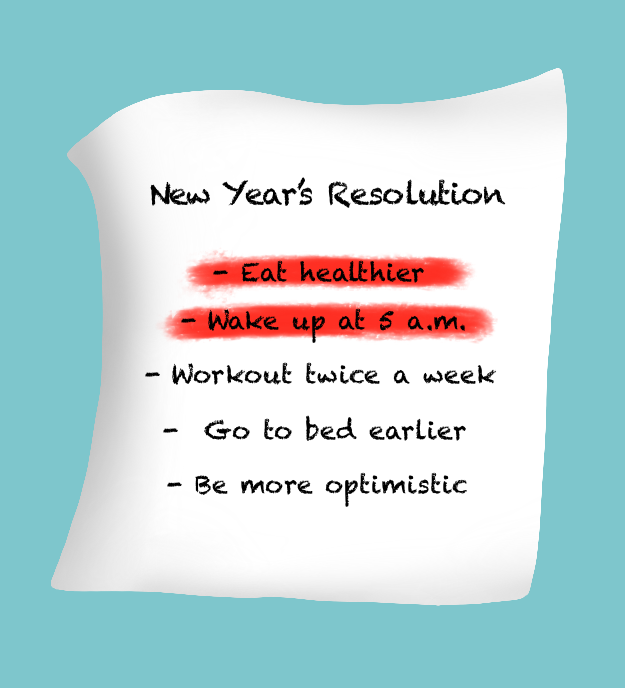 The new year always comes with promising ideas about self-improvement. People swear they’ll hit the gym more often, cut sugar out of their diets and wake up at a reasonable time every day.

With February upon us, however, you might be becoming increasingly aware of how many striking similarities there are between present you and 2019 you. Don’t worry: This is completely normal.

In fact, the U.S. News and World Report states by mid-February, 80% of New Year’s resolutions will have failed. This seems unreasonably high, but it turns out there is comfort in routine.

As Brianna Wiest from “Thought Catalog” puts it, routines create a sense of safety in childhood, and a sense of purpose in adulthood. Humans thrive off of predictability. Our goal as we go through life is to learn as much as we can about the surrounding world by learning how to predict and navigate around responses to certain behaviors.

So when we are accustomed to a morning latte on our commutes or taking a nap after lunch, breaking these habits are not at all rewarding, in the neurological sense.

Tiny food habits create a spike in blood sugar, which you can feel once it goes back to normal. Your metabolism has adjusted to receiving food at these times, so cutting them out cold turkey will affect digestion patterns and moods. And suddenly depriving yourself of sleep you normally catch up on in the afternoon will not come without consequence unless you’re getting that sleep at night.

Therein lies the problem: The habits we try to readjust have formed because of adaptation to the circumstances. For whatever reason, we lacked proper sleep at night, hence the afternoon nap. We’ve adjusted to sugar and caffeine in the morning to kick-start our day, so going without it won’t make sense unless we switch to a different morning diet altogether.

Often, altering one habit requires the complete restructuring of our routines. This doesn’t mean we shouldn’t try, but it does mean we need to come prepared to fully shatter what we are comfortable with.

They say it takes 21 days of consistent behavior to successfully form a lasting habit, and that’s just for minor habits. More dramatic changes can take upward of two months. In practice, it isn’t difficult to do something, like eat vegan for a month, but the mind can turn out to be the biggest hindrance in actually accomplishing this.

We are naturally wired to prefer things we have been exposed to, which means introducing multiple new changes in our lives can initially be taxing. Forcing ourselves out of these habits takes a lot more effort than what we are normally willing to put in at the start of the year.

Timing plays a role, too. After the holidays, which are concluded by New Year’s Day for most schools and workplaces, most people look forward to going back to pre-break routines. Suddenly trying to swap all of these long-formed habits is unrealistic, at least instantaneously.

So, after debunking the myth of the New Year’s resolution, what do we do with the routines we have formed?

We can find comfort in them. There is a reason why listening to your favorite music or watching your favorite show will always be uplifting. As we keep exposing ourselves to the same content, we simultaneously become more hyper-aware of the little details we didn’t initially notice and were numb enough for it to not require as much concentration as something new.

As for habits, we can approach them one step at a time. Swapping the morning latte for a black coffee before making it just a bottle of water might make the goal more approachable. Maybe still take the afternoon nap, but add a 20-minute walk after it.

Making small adjustments allows us to both continue the routines we have spent our whole lives forming and improve on them so we are constantly growing. This year, resolve to not force an artificial change, and watch how this can lead to more organically-driven and purposeful ones.