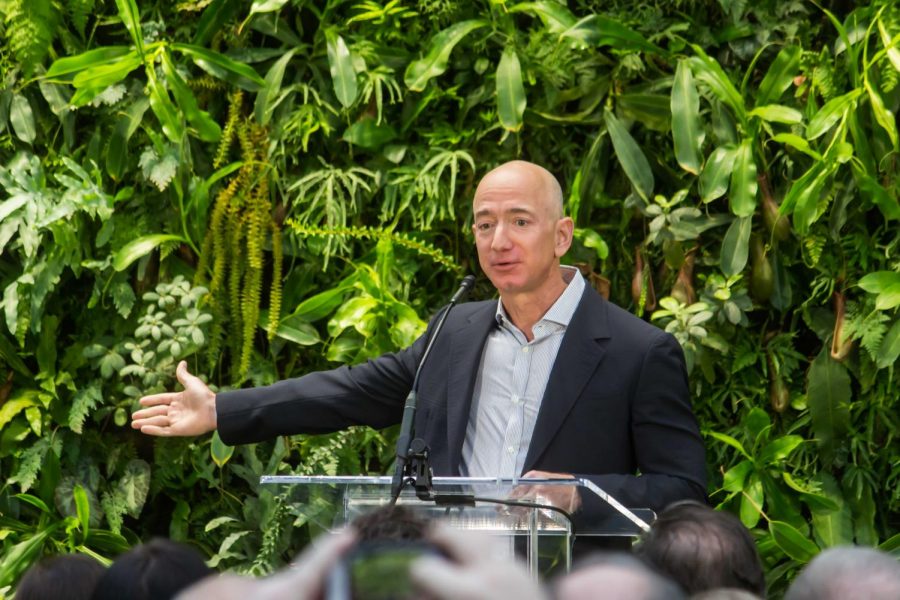 Jeff Bezos speaks at the Amazon Spheres Grand Opening in Seattle on Jan. 28, 2018. Columnist Abril believes billionaires like Bezos, who earns more than $1.5 billion per week according to Business Insider, shouldn’t exist in today’s poverty-filled society.

What would you do if you were a billionaire? Would you spend your money on lavish cars and real estate? Or maybe you would donate it to charity or invest it?  Well, whatever the case, being a billionaire is only something most of us can dream of becoming.

And with income inequality growing at an alarming rate within the United States, that dream seems to be getting farther and farther away.  According to CNN, in the U.S., the top 1% own more of the nation’s wealth than the bottom 90% combined. This leads me to one conclusion: Billionaires should not exist.

No one needs billions of dollars. At times, I think it can be hard for us to understand just how much money billionaires are sitting on. So, as you have probably already seen if you’ve been on social media within the past few months, this tweet puts things into perspective:

“If you worked every single day, making $5,000 a day, from the time Columbus sailed to America, to the time you are reading this, you would still have less money than Jeff Bezos makes in a week.”

That is just one billion dollars, but according to Business Insider, Jeff Bezos makes “more than $1.5 billion a week,”  meaning that no matter how ridiculous it sounds, the tweet is right.

While there are billionaires like Bill Gates, who donated more than half of his wealth to charity and co-started The Giving Pledge where members who join pledge half of their wealth to philanthropic causes, most billionaires are spending their money on private jets and ridiculously lavish real estate.

That is what makes the notion unacceptable that it’s okay for billionaires like Jeff Bezos to exist when in 2018, there were more than 38.1 million people in poverty.

I understand that it’s become a controversial and political topic to talk about billionaires. And with presidential candidates like Elizabeth Warren and Bernie Sanders talking about taxing the rich, it’s easy to see why it has taken that implication.

But higher taxes on the wealthy would mean freeing up more money for everyone else. Billionaires were once considered a rare breed, but with tax cuts in the last few decades, they have flourished and doubled into the people we know now. But, again, no single person needs that much money.

Think of it this way. If the economy is a pie, billionaires have taken most of it, leaving only one slice for everyone else.