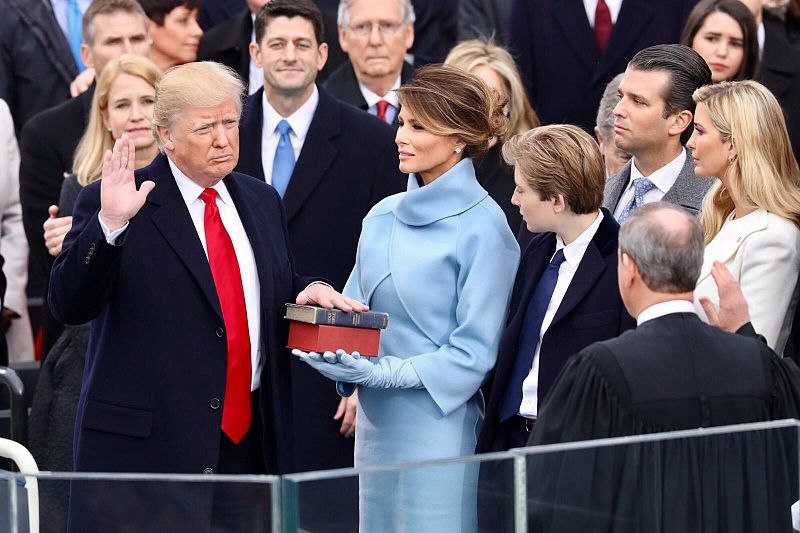 President Donald Trump sworn into office on Jan. 20, 2017 at the U.S. Capitol in Washington, D.C. Columnist Andrew draws attention to Trump’s many mistruths since his inauguration.

Trust is a bond easily broken and not easily restored. In America, where the government’s legitimacy is rooted in the people’s trust in government, transparency and integrity are paramount.

For this reason, although every politician spins, stretches and rationalizes, rarely are politicians dangerously inflammatory and willfully inaccurate. For most politicians, if a fact-checker can easily admonish a politician for a mistruth, it merits a scandal. While they called Ronald Reagan the “Teflon president,” weekly lies and scandals plaguing his administration had earned President Donald Trump the crown.

The current administration has a severe credibility problem. Media outlets, fulfilling their role as watchdogs, signaled countless mistruths during the 2016 campaign, but voters rationalized by disregarding it as campaign banter.

Hopes of the president becoming more presidential as he entered office extinguished almost immediately, with then Press Secretary Sean Spicer demonstrably lying about the president’s inauguration crowd size, a claim Spicer has since said he regrets.

Once the administration survived the press storm from the false inauguration claim, the floodgates opened. It has been reported that the president, as of Dec. 16, has made 15,413 false claims in under three years. Often these lies serve to preclude inadequate press coverage or counter substantial pushback against an administrative initiative.

For example, when controversy stirred up around President Trump’s decision to kill Iranian General Qasem Soleimani, administration officials provided weak rationale, only to provide a completely different rationale as the initial claim was pilloried.

Another unforgettable event was when the president tweeted that Alabama was in the wake of Hurricane Dorian’s projected path, a claim refuted by the National Weather Service and the National Oceanic and Atmospheric Administration (NOAA).

The president, with his pride hurt, invited the press into the Oval Office to show off a poster of Hurricane Dorian’s path with the portion covering Alabama clearly being drawn in with a sharpie. In recent days, “Sharpie-Gate,” as it was termed, has been proven accurate by emails from an FOIA request between the administration and the NOAA, where it was admitted the Alabama addition was doctored.

This event reveals the ridiculous extent the administration will go to reinforce its lies. When the president repeated a false claim that illegal immigrants’ votes caused him to lose the popular vote, he created a Commission on Voter Fraud to find him proof. The Commission was disbanded in early 2018 after months of wasting taxpayer dollars and resulting in no proof.

While the president exaggerates, many of his claims are patent lies with no grain of truth. Those claims, often rewarded with a “pants-on-fire” or “false” rating from fact-checkers, are irresponsible and sow division.

But the prior Sean Spicer anecdote makes it clear that this pattern of behavior was not just one exhibited by Trump but parroted by his entire administration. His secretaries, advisors and other subordinates have fearlessly lied during interviews and in Congressional hearings.

Kellyanne Conway’s “alternative facts” gaffe is a manifestation of the administration’s inclination to lie when the president of the United States can confidently lie about something that can be resolved with a quick Google search, that normalizes it.

Rather than the Press Secretaries becoming more truthful, press briefings have stopped altogether. It has been over 330 days since the last official press briefing. All of the press secretaries were known for making verifiably false claims, and if they cannot lie with impunity, they will make it harder for the press to hold them accountable. The president can take questions on the White House lawn, walking away when an unsavory question arises.

Loss of credibility has bred problems. When the Iranian government contradicts the Trump administration, it leaves some earnest journalists unsure of who to trust. Worse yet, the American people have lost faith in the integrity of the leader of their country.

When the president claims that a caravan of migrants is headed toward the border, he is not believed by the public. When Customs and Border Protection asseverate it was not profiling Iranian-Americans at the border, the American public is rightfully skeptical. And why shouldn’t they be? A leaked memo from the CBP directing such vetting undercuts the agency’s claim.

In the movie “Sorry to Bother You”, one character contends, “If you get shown a problem, but you have no idea how to control it, then you just decide to get used to the problem.” Although Trump’s lies sparkless fury than they once did, this cannot be normalized. America can and must demand better this November and restore integrity to the White House.