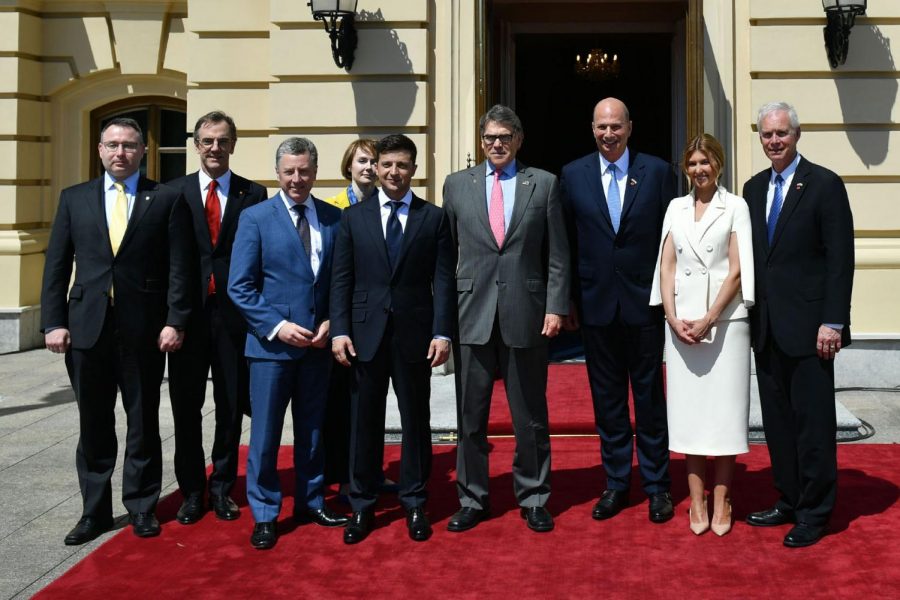 Relevant impeachment witnesses Ambassador Gordan Sondland and Lt. Colonel Vindman stand posed for a picture at Ukrainian President Volodymyr Zelensky’s inaugration on May 20. Columnist Andrew contends in his column the Republican Party acted irresponsibly during the Trump Impeachment proceedings, including their treatment toward relevant witnesses.

Senate swing vote and Alaska Republican Senator Lisa Murkowski voted with the rest of the Republican senators, minus Senator Romney, to block witnesses at President Trump’s impeachment trial. Murkowski justified her vote in a statement by saying, “There will be no fair trial in the Senate … as an institution, the Congress has failed.”

While being an utterly feckless defense of blocking witnesses from a trial, the process has been permeated by bitter partisanship. This does not mean both sides were motivated solely by political interest. Republicans, with little exception, acted incredibly dishonorably throughout the process.

In the House, misconduct began as soon as the inquiry was launched. House Republicans claimed that Democrats were holding “secret closed-door meetings,” and excluding Republicans. This was not true. Republicans sat on all the committees that were privy to inquiry uncoverings. But insincere rhetoric is arguably innocuous until it breeds ignominious actions.

A Republican coalition, led by Representative Matt Gaetz, stormed into the Sensitive Compartmented Information Facility, a room on the Hill where classified information is shared or discussed, demanding transparency in the process. In doing so, they not only breached protocol, but by bringing their phones inside, something strictly disallowed, they put national security at risk. One lawmaker even shared a phone call he made from inside the SCIF.

When hearings became televised, notable Republicans berated Congressional witnesses, many of whom did not want to be there but felt obligated. Representatives Jim Jordan and Devin Nunes stood out as disrespectful lawmakers not seeking the truth but rather seeking to demonstrate their Trump sycophancy. Republicans refused to take the inquiry seriously, requesting witnesses that would distract or delay the investigation rather than asking witnesses to help provide cover to Trump.

If there was no dignified behavior in the House, surely there was not going to be any from the White House. The Trump administration often inflamed the shameful comportment with fomenting obstruction. It refused to comply with subpoenas, frequently invoked executive privilege, and blocked testimony from key witnesses.

The White House complained that no witnesses heard anything damning “first-hand” from Trump and then turned around to block witnesses with first-hand knowledge. This earned Trump one of his two articles of impeachment, obstruction of Congress.

But even in times of division, the Senate is supposed to be the steady hand that grounds governance in reason and logic. Instead, Senate Majority Leader Mitch McConnell coordinated with the White House on the rules of the trial and worked tirelessly to block additional witnesses.

A leaked portion of John Bolton’s upcoming book alleged that Trump told Bolton aid was withheld until the announcement of an investigation and it appeared that Bolton was willing to testify. Still, all but two Republican senators voted to block witnesses, which was enough.

Senator Rand Paul tried to get the Chief Justice to read the name of the whistleblower in a question he submitted, a request that was refused by Chief Justice Roberts. Senator Marsha Blackburn read a book during the trial. Senator Graham said that he was not going to be an impartial juror before swearing an oath to be just that.

The president was acquitted, and senators acknowledged the president’s wrongdoing. Senators Lamar Alexander and Marco Rubio agreed the president had committed an abuse of power, with the latter even calling it impeachable, but both ultimately voted to acquit.

The Senate GOP has since been handed documents from the executive branch on Hunter Biden’s business dealings in Ukraine, perhaps with the hopes that an investigation can find wrongdoing that justifies Trump’s inappropriate request to Ukraine. There is little credence to the theory that Joe and Hunter Biden corruptly acted in Ukraine.

Some senators, like Maine Senator Susan Collins, justified their acquittal vote by saying the president had learned from the impeachment interlude. The days following Trump’s acquittal have proven the senator’s hope naive.

Trump still maintains he did nothing wrong despite all his colleagues that disagree. He gave a long speech the day after his acquittal proclaiming his victimhood, in stark contrast to President Bill Clinton, who apologized on television the day after his acquittal. And on the following Friday night, Ambassador Gordan Sondland and Lieutenant Colonel Vindman, who testified against Trump, as well as Vindman’s brother, were all fired from their posts. Other impeachment witnesses were shifted to different positions.

The “Friday Night Massacre” evinces that Trump did not learn from impeachment, he was emboldened. The episode of bitter partisanship begot by Republicans did not just end, it has only just begun.