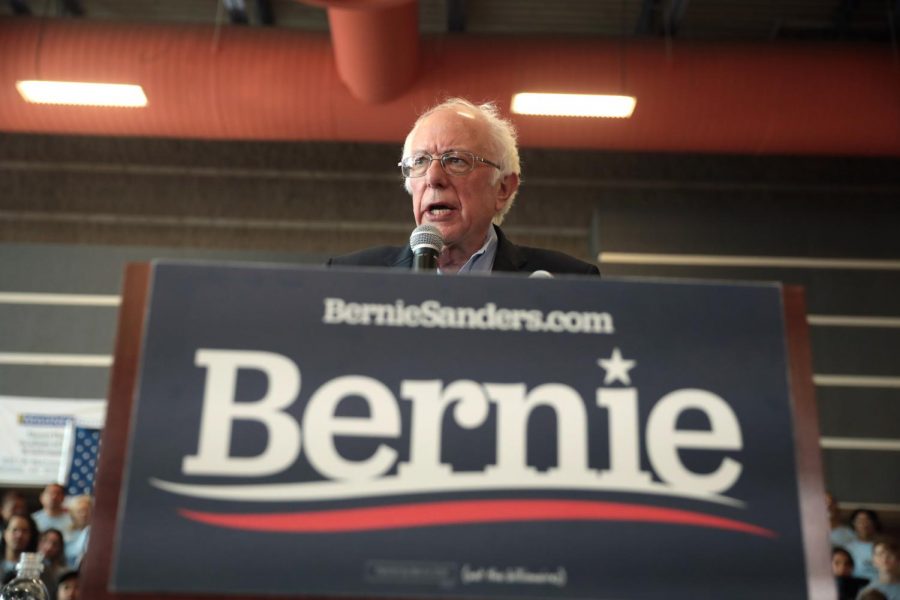 Senator Bernie Sanders speaks to supporters at a campaign rally at Desert Pines High School in Las Vegas, Nevada, on Feb. 15. Columnist Andrew calls attention to the divisive infighting within the Democratic Party and asks candidates like Sanders to remember they’re all on the same side.

The 2016 Republican Primary saw a crowded field of candidates scared by the rise in popularity of the outlier populist. Although Bernie Sanders is no Donald Trump, it appears as if the 2020 Democratic Primary will echo the same tale: one comprised of tribalism and division, exacerbated by media sensationalism.

Joe Biden has been the “Jeb Bush” of this party primary — the expected frontrunner favored by party insiders but crutched by an underwhelming campaign. And Bernie Sanders, while not as inexperienced and undignified as then-candidate Donald Trump, has been the anti-establishment dark-horse running away with the nomination by inspiring unlikely voters to turn out and benefitting from a spoiler effect among more moderate candidates.

The 2020 Democratic primary season is unique in several ways, albeit the aforementioned parallels. This primary season serves as a bitter warning as to how a political party struggles to function when the tent gets too big. It is a civil war between two directions for the Democratic party: a moderate wing hinged on pragmatism and an often idealistic, progressive wing that feels Donald Trump is the result of corrosive institutions.

The tribalistic rift within the party is exhibited through poll and primary results. Of the progressive candidates, the succeeding candidate is the furthest left. Of the moderate pool of candidates, while all have found some success, Bloomberg’s quick rise in national polls may indicate it is a race to the center. The competition may become a struggle between an anti-capitalist ideologue and a pro-business almost blue-dog Democrat.

The disastrous Iowa caucuses set the tone for a contentious primary season. An event encouraging voters to engage in an open dialogue in order to remedy differences and find a compromise resulted in a virtual tie between progressive Bernie Sanders and moderate Pete Buttigieg.

Senator Elizabeth Warren, the candidate I find to be the strongest in the race, once found herself rising to the top of national polls. She rebranded herself as the “unity candidate,” one with progressive ideals but a pragmatic attitude toward politics, and avoided mudslinging until a precipitous collapse of support. Perhaps the failure of the “unity candidate” is indicative of a primary season dogged by pertinacity.

Warren’s popularity following her sanguinary debate performance in Nevada demonstrates the process rewards bad behavior. An environment where Sanders supporters harass nonconformists online and Pete Buttigieg feels compelled to attack Sanders after the Nevada caucuses is a toxic process that discourages cohesion during the general election. When Bloomberg disingenuously insinuates Sanders is a “communist” or Sanders calls Bloomberg an “oligarch,” the Republican PAC ads for the general election write themselves.

The issues are exaggerated by the media, who draft incendiary questions for the debates and amplify division with dogmatic pundit panels. The media is more likely to report on divisive candidates and provocative remarks, leading good-natured candidates who feel the sting of little media attention to act out. Election frontloading is also to blame. The wearisome duration of the primary season allows time for rivalries, intensified disputes and dragged out controversies.

Emerson polled the question, “will you support the Democratic nominee even if it is not your candidate?” to find that Sanders and Yang supporters were disproportionately likely to say “no” or “depends.” The poll may be a testament to the mulishness of Democratic voters in this election cycle. “Vote blue no matter who,” once a Democratic aphorism, now feels tacky and disloyal to a voter’s first choice.

The primary race may end with heightened bitterness and a brokered convention where no candidate receives a majority of the delegates. If that happens, the legitimacy of the eventual candidate’s win may be questioned, given the current eagerness by Democratic voters for an overhaul of the party’s primary protocol.

The Sanders campaign seeks to grow turnout, while the more moderate candidates look to attract disenchanted Republicans. It is difficult to predict who will see their strategy realized. However, one thing is for sure: if Bloomberg or Sanders win the nomination, it is likely the country will once again see a general election wherein many voters stay home or begrudgingly show up to vote for “the lesser of two evils.”

Representative Alexandria Ocasio-Cortez recently maintained that “in any other country, Joe Biden and I would not be in the same party,” alluding to the narrow foci parties embrace in a multiparty system.

She is right. For too long the Democrats have commanded voters across a wide ideological spectrum and in the 2020 primary, the progressives have finally come home to roost.