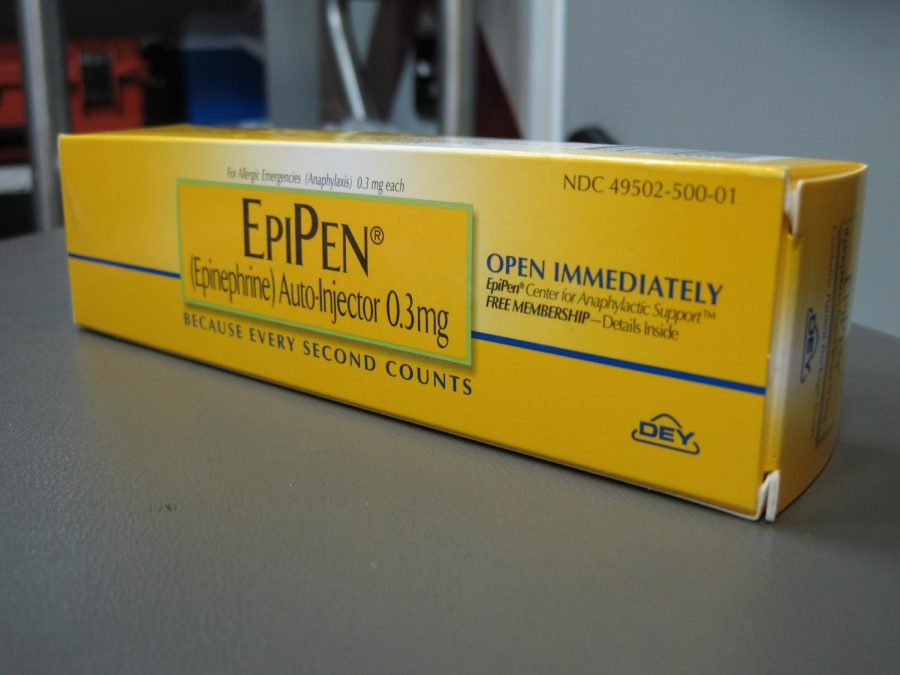 An unopened EpiPen box rests on a table. The rising cost of EpiPens has forced people with allergies to look for alternatives.

Freshman year of college is an exciting time for many reasons. For some, it’s the freedom of being away from home. For me, it was being able to eat a peanut butter and jelly sandwich for lunch.

I’m pretty sure the last time I made myself a PB&J and didn’t have to completely disinfect myself afterwards was when I was five; I almost killed my then 20-month-old brother that day. Later that week, we found out he was allergic to peanuts.

My brother has had a multitude of allergies his whole life. He’s anaphylactic to peanuts and tree nuts. Anaphylaxis is a severe, potentially life-threatening allergic reaction that can occur within seconds or minutes of exposure to an allergen. This reaction can only be treated with a dose of epinephrine followed by a trip to the emergency room.

Measured doses of epinephrine are given via injection from an auto-injector, the most common of which is the EpiPen. Most people with a history of anaphylaxis carry EpiPens with them at all times, my brother included. However, being able to do this is not as easy as it used to be.

I distinctly remember my brother carrying his two-pack of EpiPens back and forth from school in his backpack. My senior year of high school, he switched from the EpiPen to a different brand of auto-injector known as Auvi-Q.

When I asked my mom about the change, she said that EpiPens had become too expensive; we could no longer afford to pay for the medication. The EpiPen runs for over $600 if you’re paying in cash, and the price varies from $300-$600 with insurance.

Mylan faced massive amounts of criticism for its decision. In response, the company released a generic version of the product in 2018. While cheaper than the branded EpiPen, the generic version sold for $300 for a two-pack, which is still considerably higher than the price of the EpiPen just a few years before.

The prices for both the EpiPen and the generic have since increased dramatically, with the generic going for $600 with insurance. The alternatives for these drugs are not much better, with Adrenaclick selling for $500 for a two-pack.

The cheapest alternative option for these epinephrine auto-injectors is the Auvi-Q, which is  available for free with many commercial insurance companies, but this comes at a large risk. While the product itself is much more lightweight and easier to carry than the bulky EpiPen, it does not have a smooth history.

In 2015, Sanofi US recalled all Auvi-Q products due to the product’s failure to deliver accurate doses of epinephrine, leading to a man dying on his way to the hospital after going into anaphylactic shock. While the products returned to shelves in 2017, consumers are still worried.

These auto-injectors are to people with allergies as insulin shots are to diabetics: absolutely and completely necessary. I know my mother is happy to save $600, but she is nervous that, should the need arise for my brother to use his Auvi-Q, it won’t perform its function. As of late, there have been other options for epinephrine auto-injectors, but none of them have been under $150.

People with allergies, especially severe ones, live with caution. My brother can’t order at a new restaurant without coming up with at least three different meal options in case he’s allergic to one of them. We haven’t had peanut butter in my house since 2004.

Families like mine take every precaution to ensure the safety of its members. This includes having the proper medication on hand if it’s ever needed.

In the current state of product availability and pricing, families are basically forced to choose between paying $300-$600 for an EpiPen or paying less while running the risk that the product may not work.

This should not be a business strategy. These are people’s lives.

People are not pawns in the game of how to get rich quick. Human lives are not to be taken lightly, and those with allergies are no exception. These drugs exist for a reason. We should make them accessible to the people they were made for.

Sabrina is a junior in Media.