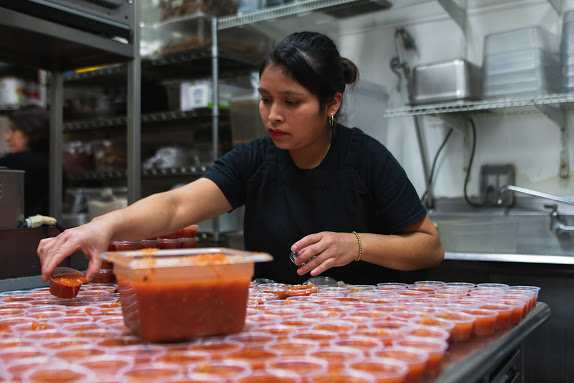 It’s apparent that COVID-19 has caused considerable disruption to the functionality of society here in the United States. Schools suspending class, restaurants closing dine-in service and an increasing number of states implementing “shelter-in-place” orders have all thrown a wrench into the normalcy of everyday life.

As this deviation from routine takes drastic effects on the workforce and the economy at large, many Americans are opting to work from home, but should their employers allow it?

While some Americans, predominantly white-collar workers, have the ability to work from home, only 29% of all Americans have this convenient alternative to clocking in. The other 71% of workers are needed in-person to provide the products or services to hold up the economy. Along with the healthcare workers providing essential care to those infected and being tested, another group of workers on the front lines of this pandemic is the food industry employees providing the commodities needed during this trying time.

Often overlooked, grocery and restaurant workers provide the most crucial aspect of civilization to each community — food. Without a place in which people can receive or grow food, there is no base for which civilization can function. These workers, often paid in the lower income brackets, provide the most essential commodities that keep our society afloat.

Imagine if grocery stores couldn’t operate during this time. These workers not only keep us from complete civil dysfunction but are also potentially exposing themselves to COVID-19. Handling thousands of items being touched by dozens of people, as well as exchanging cash with potentially hundreds of people each day, leaves these workers prone to catching the novel coronavirus themselves. In doing what is normally considered the most basic of tasks, they are doing society a great and necessary service.

It is ironic that the jobs often paid minimum wage and largely undervalued by society are currently serving as one of its fundamental pillars. This pandemic reminds us that the jobs often referred to as “jobs for teenagers” or jobs to simply “get work experience” are crucial to our accessibility to vital resources. While big-money players in the economy, such as entrepreneurs and financial firms, are essential in providing the capital to create and maintain business, the backbone of the economy still, for now, relies on the labor of the working class.

Perhaps shedding new light on the vitality of the underappreciated worker can shift the narrative from them being viewed as “lesser” to equally deserving of a stable living condition as any other worker in the economy. It is an opportunity to further propel the idea that people in all fields of the economy deserve healthcare, a livable income and other benefits that many upper and middle-class Americans have.

The fight for increased earnings and benefits for such workers, such as higher wages, better working conditions and universal healthcare, has endured since the progressive era movements in the early 20th century, so the notion that these sorts of workers deserve better is nothing new. But that movement was relatively stagnant once the post-World War II boom ended. That is until the aftermath of the 2008 financial crisis gave way to minimum wage increases across many cities and states and renewed discussions on universal healthcare.

These workers’ service during this outbreak may further open up conversations about the aforementioned benefits among the older voting bloc and help mold the mindset of an already egalitarian-minded younger voting bloc.

These workers cannot be overlooked. In this obscure time, it’d be surprising if not almost every American has taken at least a brief moment to realize how important these workers are to the economy and to their communities. Perhaps that sort of circumstantial appreciation can translate to policy benefiting those workers sooner rather than later, offering a tangible “thank you” to those helping the rest of us live comfortably.