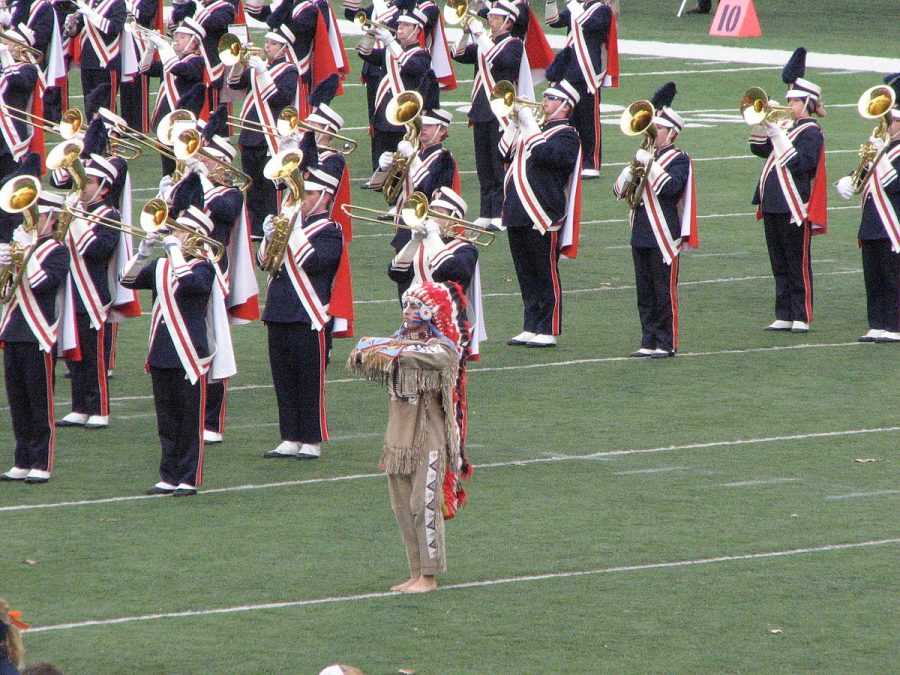 Since its founding in 1867, the University has lived a long, rich history. Augmenting into one of the nation’s top places for higher education and research it is today, there have also been some downfalls over the years, especially pertaining to Chief Illiniwek.

Since his last appearance at the Feb. 21, 2007, men’s basketball game against Michigan, the Chief has continuously stayed a controversial figure among the University, students, alumni and fellow Illini fans.

Whether you think the Chief should return as the school’s mascot or stay in retirement, there’s no doubt about the following statement: Chief Illiniwek will always be part of school history.

Originating in 1926, assistant director of bands Ray Dvorak conceived the idea of having a Native American war dance performed during halftime at football games. Soon, two Eagle Scouts, Lester Leutwiler and Ralph Hubbard, combined their extensive knowledge of Indian lore and dance and thus the Chief was born. At his first performance at Memorial Stadium on Oct. 30, 1926, the Chief danced during halftime, then met a drum major dressed as the University of Pennsylvania’s Quaker mascot, offered a peace pipe, and walked off the field arm in arm.

The name Illiniwek, meaning “the complete human being, the strong, agile human body and the indomitable human spirit,” was first used in conjunction with the University football team by then head coach Bob Zuppke, referring to Illinois Confederation of Native Americans who then made up much of the Illinois population. Created not to portray a real person, but rather a high-minded concept of unity, the Chief intended to reflect the honor and tradition of the University while also leading all Illini tribes.

Over the years, the Chief performed his traditional dance during halftime at men’s basketball and women’s basketball and volleyball games. A dark chapter in University history began in 2006 when the NCAA ruled that schools with Native imagery must earn permission from the tribe they were representing or they would not be allowed to host postseason tournaments.

Universities like Florida State and Utah were able to partner with local tribes and maintain their imagery. However, the Chief at Illinois represented a loose confederacy of several tribes, so the NCAA made the Peoria Tribe of Indians of Oklahoma responsible for the Chief’s future.

Peoria ultimately voted against supporting the Chief and the University soon retired the symbol on the grounds that it was “hostile and abusive.”

Potential hope came in 2013 when Peoria raised the possibility of re-voting in talks with the Council of Chiefs, assuming the University would partner with the tribe. Then University Chancellor Phyllis Wise refused to re-open a dialogue. But discussion of the Chief still continued.

In 2017, current Chancellor Robert Jones announced that the Marching Illini would be banned from playing the “War Chant,” an action viewed as a victory from anti-Chief activists. Two years later, Jones announced a mass ban on all Native American names, images, logos, and music that applied not only to the Chief tradition, but any use of Native art in official marketing or athletics, a ban still in effect today.

Recently, students have attempted to create another mascot for the University. With potential prospects like the Alma Otter and the Kingfisher bird, rumors have also circulated around campus about other mascot ideas including The Galloping Ghost and President Abraham Lincoln himself.

Like Benny the Bull for the Chicago Bulls, Fredbird for St. Louis Cardinals and Rowdy the Cowboy for the Dallas Cowboys, mascots make Game Day experiences all the more exciting.

Even in the Big Ten, Michigan State has Sparty, Purdue has Purdue Pete and Ohio State has Brutus Buckeye. It’s unfortunate Illinois does not have one of their own, but the Chief does still linger on campus.

People still wear Chief clothes to games and around campus all the time. His picture is still plastered on the photo board in the foyer of Foellinger Auditorium. Even more so, many students still put one arm over the other in front of them and shout “Chief” at football and basketball games.

If the Chief were to come out of retirement, I wouldn’t be the only one jumping for joy. However, if he were to return, there would no doubt be much more debate about the topic than ever before. Either way, anyone connected the University in some capacity must remember the Chief.

Among many University staples like the Morrow Plots, the Alma Mater statue and Krannert Center for the Performing Arts, the Chief is just as important. No matter how contentious his possible return to the University may be, the Chief will always remain a part of school history.

Noah is a sophomore in the College of Media.