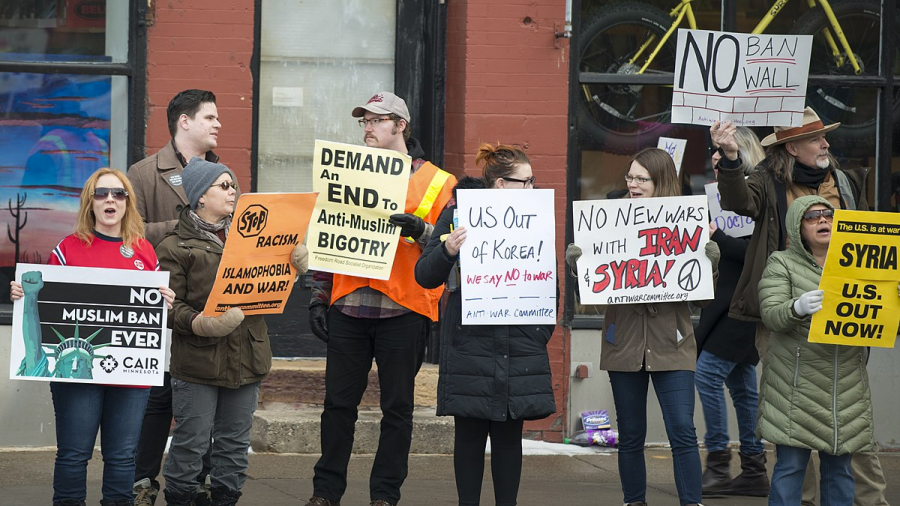 Anti-Trump protesters demonstrate in Minneapolis on the anniversary of his inauguration on Jan. 20, 2018.

Too often over the last few years, many have asked me the same question: “Are you pro-Trump or against him?”

The forthright question serves as a litmus test to pigeonhole you into a partisan dichotomy. But on a larger scale, it tacitly implies you must either defend the President absolutely or denounce him completely. If only it were so simple.

The President’s demeanor is abrasive, comical and egotistical. He entered politics as a Republican and has governed a fairly conservative agenda. Many either love him or hate him for these traits, and both are reasonable positions.

President Trump has found himself at the center of a myriad of sexual misconduct scandals throughout his political career. There’s not a soul in the country that hasn’t heard about the Access Hollywood Tapes or Stormy Daniels. The President deserves condemnation for all credible scandals of this nature.

Politics, persona and behavior are legitimate and reasonable grounds for opposing the President. Yet, some have cultivated a deep animosity for the President that transcends all these criteria.

“Trump Derangement Syndrome,” — “TDS” for short — is a phenomenon where people’s distaste for the President drives them to act in unreasonable fashion and rely on mental gymnastics to justify their opposition to him. I wish I could classify Salon’s piece on “Post-Trump Sex Disorder” — how the President has destroyed women’s sex lives — as an example of nitpicking, but this behavior has spread pervasively.

Many intellectually-honest people across the spectrum recognize such absurd behavior for what it is and refrain from it. But some overzealous supporters of the President fall victim to their own strain of TDS in their diagnosis of it.

Consider Trump’s impeachment proceedings. Shortly after the House voted down partisan lines to pass the articles, I penned a column arguing against the impeachment but acknowledging the reasonable perspectives on both sides of the scandal. It’s just as valid to believe Trump abused his office as he committed no crime and should be acquitted.

Jonah Goldberg is a well-renowned conservative pundit who supported the impeachment. He knew his principled position would be unpopular among many conservatives but defended it publicly. Goldberg was unmercifully charged with TDS by others on the right.

In a baffled column, Goldberg questioned how a position he felt he arrived at reasonably — leaving aside the question of his correctness — could be cast aside so easily as not just wrong but deranged. He realized that those on the right calling others such as himself deranged were suffering from their own affliction: “Pro-Trump Derangement Syndrome” (PTDS).

Both forms of this radicalism are perilously toxic to the American political landscape. These “cult of personality” obsessions and oppositions are completely removed from reason or principled positions. How did this happen?

The great psychiatrist turned pundit Charles Krauthammer observed this exact same derangement towards President George W. Bush in 2003. He authored an article about a governor who insanely suggested the president had prior knowledge of the 9/11 attacks.

Drawing from his psychiatric background, Krauthammer diagnosed the governor with “Bush Derangement Syndrome: the acute onset of paranoia in otherwise normal people in reaction to the policies, the presidency — nay — the very existence of George W. Bush.”

Given the persistence of this behavior in some form for well-nigh two decades, it’s safe to infer it isn’t a temporary symptom of the Trump presidency. There is a more profound issue at root here.

Americans must stop worshiping politicians. Politicians are not an elite ruling class, they are equals with their constituents. Many erroneously mistake the soap-box for a gilded pedestal. Politicians do not deserve your undying loyalty. Rather, they must earn your support by advancing your values.

The sooner deranged Americans stop allowing politicians to dominate every aspect of their worlds from DC, the better. If we are to return to normalcy and de-escalate the pervasive partisan divide and restore a sense of commonality with one another, we must hold ourselves loyal to values instead of politicians.

My answer, whenever I’m pressed on whether  I’m “pro-Trump or against him,” forever has been and will continue to be: “I’m sometimes Trump, always my values.”