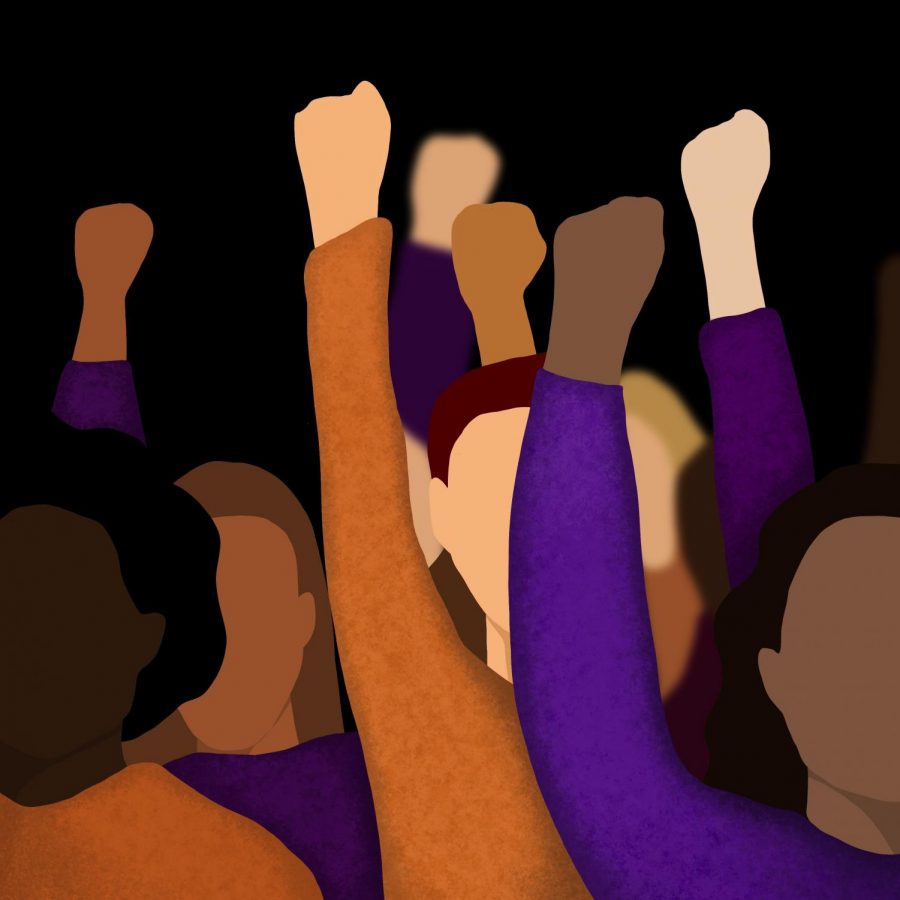 By The Daily Illini Editorial Board
June 9, 2020

In 2016, NFL quarterback Colin Kaepernick shocked the nation by kneeling during the national anthem to protest police brutality. Sharp criticisms trailed. The usual suspects argued the spectacle was the wrong manner to protest, showed disrespect and was opportunistic. America refused to listen then.

But Kaepernick’s actions would almost be prophetic. Four years later, the same kneeling stance would be employed by an officer to murder a handcuffed, unarmed Black man whose nonviolent use of a counterfeit $20 bill apparently necessitated nearly nine minutes of suffocation.

As the video capturing George Floyd’s unjust, appalling death went viral, the hearts of millions of Americans shattered. Floyd’s life was cut short while crying for his late mother and expressing his inability to breathe.

The protests may have been sparked by the death of one man, but the continued outrage is over an all too familiar trend: excessive use of force against Black Americans.

Typically intemperate force by the police, it can be force used by so-called vigilantes as well. These cases aren’t anomalies, they’re archetypal interactions that happen to be caught on camera.

Thirty years ago, the footage of Rodney King’s beating at the hands of police angered the nation and caused five days of riots in Los Angeles. The world has heard about the deaths of several Black Americans in just one month this year. If that isn’t telling as to why these current protests haven’t ceased, future deaths are inevitable.

Regardless, it’s clear this trend is a malignant concoction of two American traditions: racism and the militarization of law enforcement.

The resulting protests have exerted ample pressure on exigent issues, and change is on the horizon. Charges have been filed against the officers responsible for Floyd’s death as well as the men who killed Ahmaud Arbery. Virginia Governor Ralph Northam has ordered the Robert E. Lee statue to be removed in Richmond — once the capital of the traitorous confederacy.

Additionally, America is beginning to wake up. The NFL has expressed regret over negligence to Kaepernick’s message, the “Black Lives Matter” movement has become mainstream and lost its controversial edge and the Overton window has shifted dramatically in the direction toward police reform.

Changes like these reinforce the urgent necessity to take to the streets and protest. Leadership has demanded the restoration of order, but that would mean continued obedience to a broken system. Before order can be restored, reform must be guaranteed. Better start drafting legislation, Congress.

Among those reacting to the protests, it is more clear than ever who is buttressing systemic racism and white supremacy. Through empty words, moral platitudes and feigned outrage, it is clear where people’s priorities lie. If someone with the power to effect change says his plan to end racism is to have a strong economy, it’s not hard to assess his sincerity.

The recent focus on race relations has even drawn attention to the unfortunate existence of the Illinois White Student Union, a Facebook group composed of university alumni overtly expressing racism. One should do his or her duty and report the group, if not for hate speech then for bastardizing the Illini image.

No matter what one thinks about the character of rank-and-file police officers, it is hard to dispute that police enjoy far too much discretion in their use of force under a system that discourages reform.

The difficulty in reforming the policing system from the inside is all the internal mechanisms that prevent discipline or reform, apparatuses such as internal investigations, qualified immunity, the strength of discipline precedent and the strength of police unions. Additionally, as public employees, there is a protection that allows fired officers to appeal a firing, which succeeds for roughly one in two appeals.

Then, there is the Graham standard — guidelines determined in Graham v. Connor wherein an officer has the right to use force if certain factors imply a reasonable threat. The Graham standard, originally expected to curb police brutality, is now used as an impenetrable armor for officers in the courts, allowing officers to freely use force in most scenarios.

Therefore, reform must be enacted through legislation. Reform would make everyone safer, police officers included.

Proposed solutions range from incremental reform to abolition of police forces altogether. In recent years, the introduction and increased usage of body cameras have helped to reduce police brutality in some capacity, but the jury is still out on the efficiency of this reform.

The slogan “Defund the police” has gained popularity as the public questions police spending, such as excessive spending on military-grade equipment or settlements in police misconduct lawsuits, arguing the police are tasked with too much responsibility and should be more specialized.

Political inaction, protests, riots and looting have been present internationally through the week with few indications 0f the passion extinguishing.

It is currently unclear which actors are engaging in violence and what their motivations or values are. However, videos have captured racist civilians assaulting protesters and defacing their signage, Buffalo riot police shoving a 75-year-old man to the ground and a police cruiser plowing into a crowd of protesters.

Perhaps even more infuriating was the events that transpired in front of the White House. Peaceful protesters were bombarded with tear gas and rubber bullets, before curfew, in order to permit the president to have a photo op in front of a Church (whose owners condemned the events).

The president has advocated the use of the United States military against its own citizens in order to quell protests and has not expressed any ambition to reform the police but rather pledged to give more money to law enforcement. During his presidency, he has reversed Obama-era police regulations and rarely used federal tools like investigations and consent decrees to intervene.

In order to help the cause, consider peaceful protesting (with a mask), spreading petitions and community-aid funds on social media or write your representatives and senators.

It is not only crucial America addresses systemic racism, police brutality and a past of racial oppression, but it is imperative voters critically ponder the following: are there a few bad apples or is the whole orchard rotten? It’s heartening to see the whole country recognize the cruelty of George Floyd’s death, but the problem does not begin and end with Floyd.

Although the vehicles of police reform may be up for debate, let us be clear there is one thing that absolutely must be stubbornly accepted, full stop: Black lives matter.