Thank you for your remarkable career, Undertaker 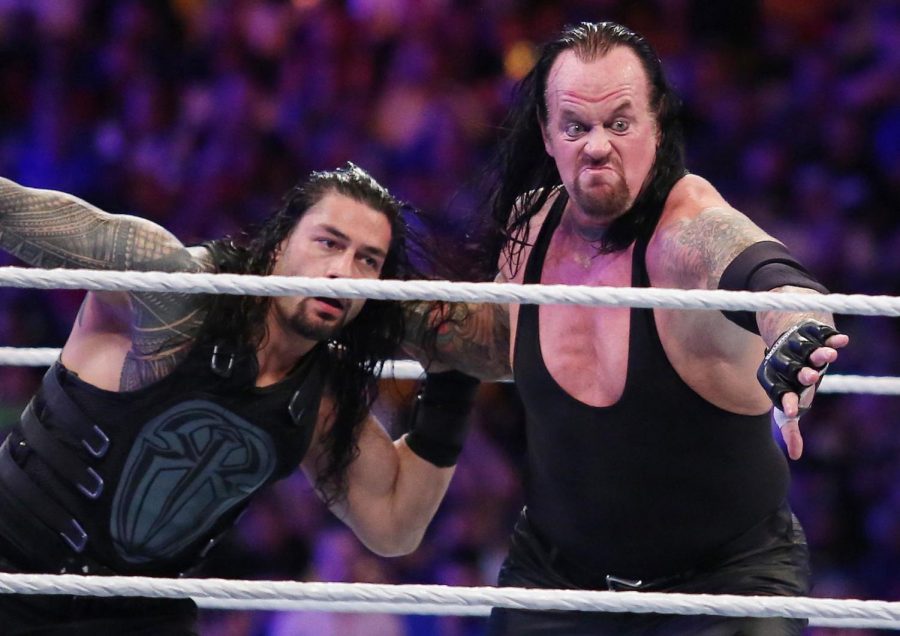 The Undertaker, right, throws Roman Reigns during WrestleMania 33 at Camping World Stadium in Orlando, FL. in 2017.

In the world of professional wrestling, historians, fans and others probably have a good idea who will go down as the best person to ever wrestle within World Wrestling Entertainment. Some might say those of the past like Hulk Hogan, Andre the Giant and The Ultimate Warrior. Others would argue it’s headlining names like Dwayne “The Rock” Johnson, Stone Cold Steve Austin, John Cena, Shawn Michaels and Triple H.

Any true wrestling fan would argue that the most coveted title belongs to The Undertaker, a man who has broken numerous records, wrestled almost everyone in the locker room and truly left his mark in sports entertainment. And everyone should thank him for his remarkable career.

On June 21, The Undertaker, whose real name is Mark Calaway, officially announced his retirement from WWE in the sixth and final episode documentary series about him called “The Last Ride.” He said: “Never say never, but at this point in my life and in my career I have no desire to get back in the ring,”

After debuting on Ted DiBiase’s Million Dollar Team at Survivor Series 1990, The Undertaker began making a name for himself with his dark, eerie persona in all aspects related to death. His manager Paul Bearer carried an urn with him to every match as The Undertaker would dress in a black hat and suit and even began calling himself “The Deadman.”

Through the years, The Undertaker managed to accomplish what all wrestlers dream to do, most notably his 25-2 streak at WrestleMania. Though he fell at the “Grandest Stage of Them All” to Brock Lesnar and Roman Reigns, this record will never be repeated again. It’s one of the greatest records in sports and adds to The Undertaker’s already successful career.

What made him so admirable and spectacular to watch was his character. Over the years, The Undertaker changed different styles of his persona but kept the same dead-like theme. With coining such phrases like “Rest in Peace” toward his opponents and walking out to each match to the sound of gongs and bone-chilling music, no one can ever top the greatness of The Undertaker or ever match what he has accomplished in WWE.

In recent years, countless wrestling fans have speculated when his retirement would happen. With only working WrestleMania and a few select other events the last decade, The Undertaker pushed on, putting his body and health on the line, continuing to live up to the title as one of the greatest of all-time.

Though fans are probably upset with The Undertaker’s retirement announcement, this was as good a time as any. In three decades, no one will ever come near to accomplishing what The Undertaker has done. There’s no doubt he will take his final resting place inside the WWE Hall of Fame, but before then, we must thank him for such a remarkable career, one that will never happen again in our lifetime.