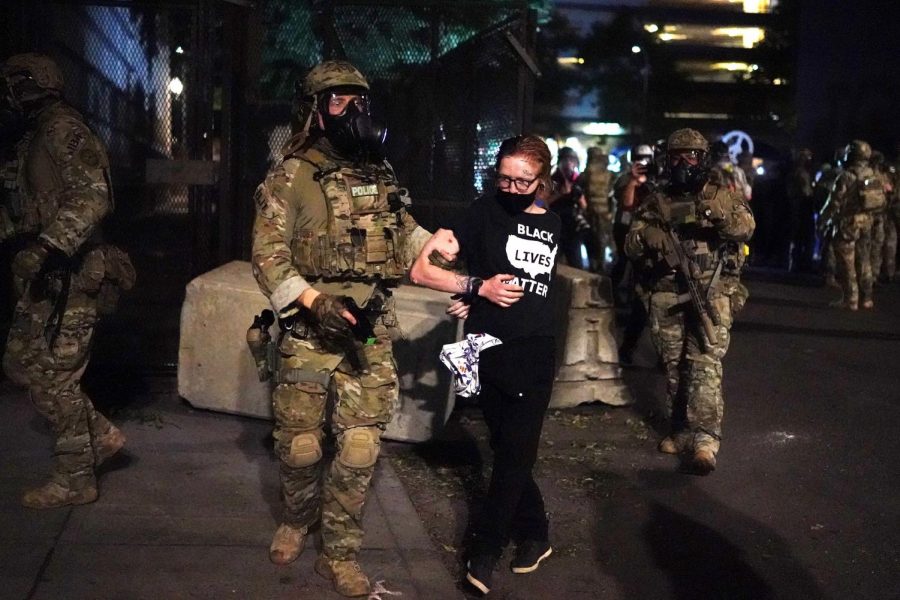 Federal officers arrest a protester after dispersing a crowd of a few hundred people from in front of the Mark O. Hatfield U.S. Courthouse in the early hours of Thursday, July 30, 2020, in Portland, Oregon.

Picture this. Late into a humid summer night, you continue your tiresome trek down the boisterous urban streets, protesting injustice that putrefies your country. Your stomach is grumbling and your legs are weary, but you feel proud of joining a throng of fellow citizens and utilizing your voice in attempt to catalyze change.

Suddenly, a rough hand grasps you by the arm. You turn to see a group of men wearing camouflage military fatigues who promptly spray mace in your eyes, slap handcuffs on your wrists and duck you into a large black van. As the vehicle reaches its destination and its doors open, your burning eyes make out the sign of a federal courthouse as you are swiftly escorted inside.

For the next nine hours, you are interrogated by federal officers in a cell with no water or legal counsel. After your sleepless, hellish night, you are released the next morning. Upon arriving home, you receive a court violation notice citing your failure to comply with a trained officer.

Now, ask yourself: when and where could something like this have possibly happened? Did you guess Nazi Germany, Stalin’s Russia or any other early 1900s authoritarian regime? Perhaps a compelling George Orwell novel? While these would be reasonable guesses, they would also be incorrect — this happened just weeks ago in downtown Portland, Oregon.

The above story is not a hypothetical nightmare scenario, but rather the real-life experience of protestor Juniper Simonis after President Donald Trump’s frighteningly despotic response to ongoing protests in Portland. Completely undermining Oregon’s recently established police reform laws, President Trump has quietly sent federal officers — who are untrained in mass demonstration control — to implement forceful tactics of restraint that are no longer deemed legal within the state.

These officers are appearing at protests, firing off illegal riot control agents, seizing peaceful demonstrators, ducking them into unmarked vehicles and driving them off. Ken Cuccinelli, the acting Deputy Secretary of the Department of Homeland Security, smugly referred to the mysterious detentions as “standard law enforcement procedure.”

If such abhorrent violations of Constitutional rights are now deemed as standard procedure, American citizens should be terrified — but not surprised.

One cannot overstate the incredible irony of a president boldly posing to be a vanguard of “LAW & ORDER!” with one hand as he orders the deployment of federal officers to carry out the unconstitutional detention of American citizens with the other. The dichotomy between what President Trump proclaims to be and what he actually does begs the question: what exactly is this “law and order” and to whom does it apply?

President Trump has been shamelessly selective about how and where he applies justice. When any situation that challenges his campaign rhetoric arises — like when “thug” protestors voice their disdain for America’s police system — he becomes very concerned with applying “law and order.” However, when it comes to the legitimate prosecution of known ex-Trump associates, the President’s idea of “law and order” transforms drastically.

Roger Stone, longtime friend and political advisor to President Trump, was convicted on seven charges for obstructing a congressional investigation into the 2016 Trump campaign’s ties with Russia. Using standard advisory sentencing guidelines, four federal prosecutors recommended that Stone serve 7-9 years in prison. Typical procedure would see the Department of Justice use the sentence recommendation to determine how long the criminal will remain behind bars.

President Trump, however, took to Twitter to publicly bash the “horrible and very unfair” sentence recommendation for his convicted friend. Attorney General William Barr shot down the recommended sentence promptly afterwards — a maneuver so shocking and blatantly biased that the four federal prosecutors resigned from the case out of sheer disgust.

As if the unprecedented dismissal of the recommended sentence wasn’t a sufficient slap to the face for the U.S. federal justice system, President Trump recently commuted Stone’s sentence entirely — meaning the convicted felon will face zero time in prison.

President Trump’s idea of “law and order” is not defined by the Constitutional values upon which this country is built but rather by how he can exploit his presidential power to advance his own desires. Watching a president so impudently pervert the definition of justice for personal benefit and order the unlawful detaining of peaceful demonstrators should boil the blood of every American citizen.

If President Trump is awarded for such dictatorial behavior with reelection, one can only imagine what another four years could bring.

Nick Johnson is a sophomore in LAS.