Opinion | Chicago Police Department is not for the people 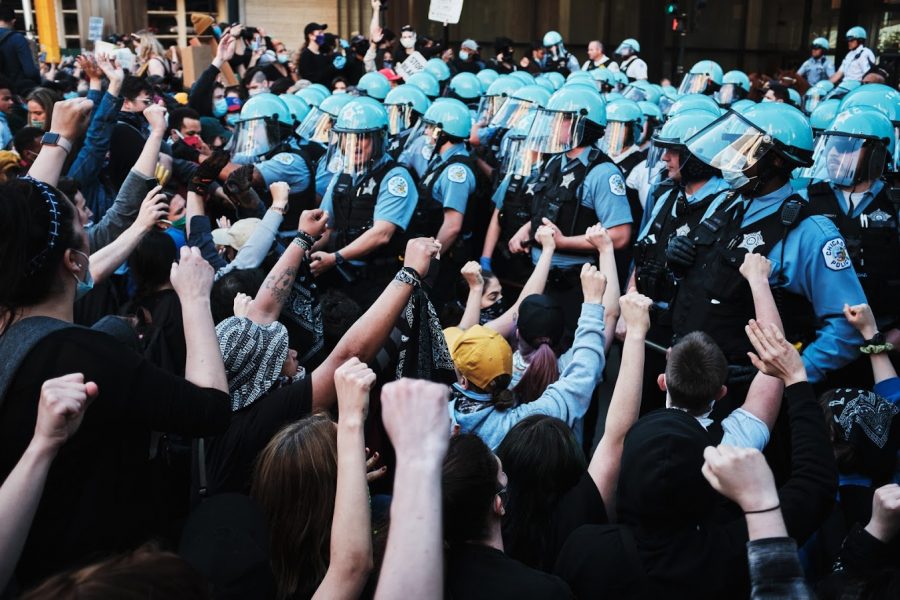 Chicago police officers form a line in front of demonstrators during a protest on May 30. Columnist Maii argues the CPD is responsible for much of the violence occurring on Aug. 15.

As Black Lives Matter protests rage on around the country, it is clear that the Chicago Police Department is responsible for much of the violence that has occurred this last Saturday, Aug. 15, having had quite a field day in demonizing and arresting protestors and enacting targeted arrests and heinous penalties.

Jeremy Johnson — informally known as Mohawk — seems to be the next victim of the police force’s excessive power trip. Not only have they attempted to publicize a skewed image of Mohawk being an instigator and ‘agitator,’ but they have continuously made his life and the lives of those he loves incomprehensibly difficult.

As I spoke with Mohawk’s roommate and friend, Jake Doan, he had expressed that “the entire process this week has been riddled with just about every single complication,” including CPD having “repeatedly denied or severely barracited his lawyer access to him at the jail … and illegally removed his right to legal council.”

The CPD had also posted Mohawk’s and Doan’s home address information on Facebook and Twitter for “over 12 hours, during which there were several vile and racist comments and threads that forced (their) remaining roommates … to evacuate for (their) own safety.”

As Doan pointed out, for a police department to put individuals in this type of unsafety is “extremely illegal, incredibly dangerous and inhumane.” Ironically, “Mayor (Lori) Lightfoot is now using police as personal bodyguards at her house, claiming she deserves to feel safe in her own home,” and further publicized this statement “48 hours after (Mohawk, Doan, and their remaining roommates) had to flee their own home.”

Furthermore, after Mohawk’s bond was paid fully, the CPD “detained him for an extra three days after the payment was made,” citing issues with electronic monitoring. However, while all these “issues” were being further complicated by the CPD themselves, “Mohawk also claims he was misled about his process.”

Doan further explains the CPD’s clear violations, stating that himself and others were “unable to contact (Mohawk) for the entire time he was incarcerated, save for Mohawk making his one phone call to (Doan) the morning he was arrested.”

The CPD also intentionally misled Doan and his roommates “when (they) were trying to locate him initially, and confessed they provided incorrect information after (they) searched multiple facilities across Chicago … for over five hours.”

When Mohawk was finally released, Mohawk’s supporters stressed he be escorted in a windowless van to his undisclosed safehouse, yet when the CPD caught light of a demonstration his supporters planned to have for his release, they “released him at 8 p.m., several hours before (anyone) was told.”

As Doan expressed, “At best this is a willfully negligent and unacceptably inefficient system, and at worst, they have expressed truly cruel intentions for my best friend every step of the way, before he has seen a single day in trial.”

As Mohawk’s trial is to be this Monday, many have pledged their support and furthermore exclaimed their distaste for the CPD’s unprofessional and destructive actions. Many Twitter threads have also been created for his sake in the hopes of a lawfully and respectable trial, although by the looks of it the CPD sees this support as a threat to their power.

As Mohawk’s trial has been continuously published this week, both on major news outlets and on social media, it is clear by the CPD’s limited responses that they care very little for the individuals they were sworn in to protect.

Maii is a sophomore in LAS.