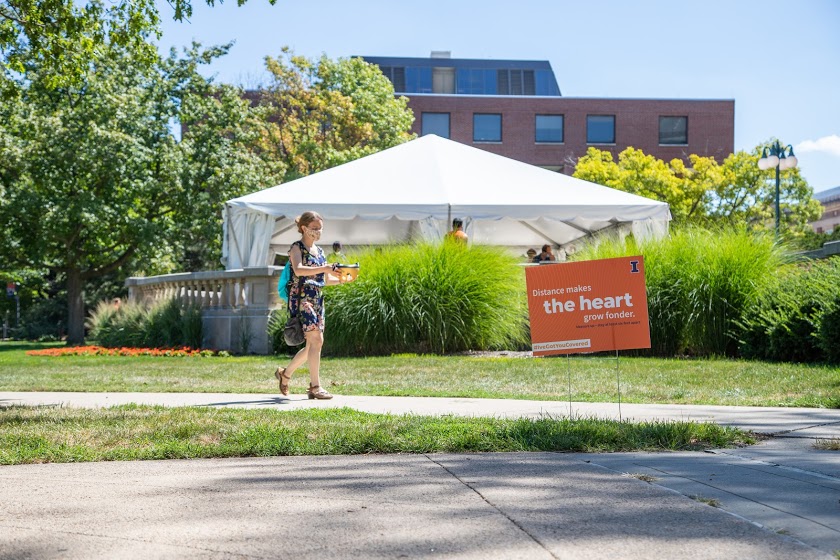 A student strolls down a walkway in front of a university COVID-19 testing site on Friday.

It’s that time of year again. Students throughout the United States — and throughout the world — are once again arriving at universities and colleges, moving into dormitories, stocking up on supplies from a Walmart or Target and descending on local liquor stores. In any other year, this process would hardly be cause for anything more significant than small talk, but 2020 is not any other year.

After the onset of the COVID-19 pandemic caused essentially every university in the United States to evacuate its students and begin remote instruction in just March, the question on the minds of many remains: “Is it smart or even safe to reopen universities right now?” The answer is unequivocally, “No.”

I have been very skeptical of the idea of any significantly large portion of students returning to their respective campuses this fall ever since these institutions were shuttered in early spring. When my university, the University of Illinois, announced that thousands of students could be returning to Champaign-Urbana this fall for instruction, my skepticism only intensified.

My deep reservations about bringing so many students back to reside in such a dense campus-living environment are not unfounded either. Aside from the anecdotal evidence of having simply met people who are under the age of, say, 20 and in college, there is strong evidence that young people are not nearly as concerned about the consequences of contracting COVID-19, thus are much less likely to practice social distancing. Need I remind everyone of the massive crowds on beaches during spring break and earlier this summer?

While young people are far less likely to be hospitalized or killed by this virus, an outbreak on the University campus would hardly stay confined to the students for long, and it could wreak havoc on the community as a whole. The University’s own modeling even projects that cases are likely to increase dramatically — likely by the hundreds — at the beginning of the Fall 2020 semester. The University is confident that it can manage this increase, but that will remain to be seen.

Furthermore, outbreaks have already happened on other campuses in the United States. Michigan State suspended in-person classes entirely and Notre Dame is online-only for at least 2 weeks, as of Aug 18.  After seeing a steady and concerning increase in the positivity rate for COVID-19 tests. The University of North Carolina at Chapel Hill was forced to do the same after it too experienced an outbreak of coronavirus, and the University of Alabama has just reported an outbreak of more than 530 cases among students and faculty at its Tuscaloosa campus.

Although all of those institutions do not seem to have been nearly as well-prepared as Urbana-Champaign, there is no guarantee that even the extreme measures Illinois is taking will be enough to prevent an outbreak.

So why take this risk? Why not keep all students who have no in-person classes off of the University of Illinois campus as the default, for the foreseeable future? That certainly seems like it would be the safest thing to do, and I fear the reason the University has chosen not to do so for an incredibly vile reason: the money.

Let me be very clear here: I am not asserting that the people who worked on the University’s reopening plan — some of whom are faculty with whom I have personally interacted with — are acting out of malice or that they are intentionally trying to cause an outbreak. Nothing of the sort. I believe that everyone involved with designing the reopening plan here at Illinois had the best of intentions and that many of the provisions of that plan are very well-thought-out.

Having said that, it would seem to me to be childishly naive not to make the connection between the decision to bring students back to campus and the absolutely dire loss of revenue that the University would have faced were they to have done the opposite. Of the more than $3 billion that keeps the University of Illinois in Urbana-Champaign running on a yearly basis, more than $800 million was generated from tuition and fees in fiscal year 2020. Combine such a potential revenue loss with the looming possibility of a major cut in funding for the University of Illinois system by the state of Illinois (its largest source of funding), and a truly dire fiscal picture comes into focus.

I’m happy to be wrong about what may be on the horizon as far as COVID-19 cases are concerned, here in Champaign-Urbana, and indeed I really hope I am. But it seems obvious that, when it came to the ultimate decision to bring students to this campus, the financial concerns of the University were much more of a priority than they ought to have been.