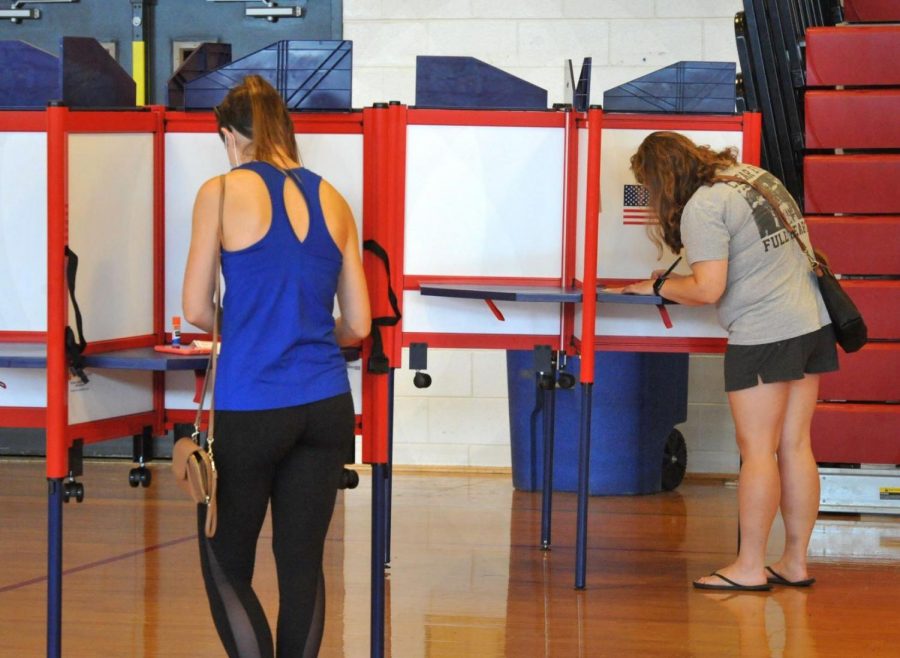 Socially distanced voters mark their ballots during early voting for the state primary at North Quincy High School in Quincy, Massachusetts on Aug. 22.

There’s been a lot of talk recently about voter suppression, both with the whole vote-by-mail debacle, as well as other generally prohibitive voting practices. I’ve got good news for you, my dear college student, or otherwise technologically literate person: You can single-handedly stop voter suppression.

Become an election judge. An election judge is a person who sets up the polling place, checks voters in and registers those who did not register prior to election day (at least in Illinois, but this law varies by state).

I was an election judge twice, once for the 2016 Presidential Election, and once for the 2018 Midterm Election. Both times, I was the only person under the age of 65 to volunteer.

As an election judge, you are required to understand how to use and troubleshoot provided equipment. In Cook County, where I judged, the equipment, though a bit arcane, involved laptops, a mobile hotspot, label printers, an I.D. scanner and the actual voting machines (mainly touchscreen).

Though every judge undergoes the same training, it is no secret that those of a certain age, shall we say, are not savants at technology. For example, my fellow judges found themselves unable to use a trackpad to navigate the laptops.

I commend our retiree population which volunteers its time to the democratic process. I’m afraid, however, that the demographic of these judges could lead to voter suppression via their incompetence with basic technology.

The first time I voted, I registered on election day. As a judge in 2016, I registered between 50 and 75 people through the day, a process which is quick and easy, if you understand what you’re doing.

The woman election-judging when I registered, however, did not understand how to register new voters, so I went behind the laptop and told her how to register me. If I hadn’t known how to direct her, it’s likely I would have walked away from the polling place having not voted.

Technology is practically a first language, a second nature, for members of my generation. The first time I used a computer, I was probably four years old. I learned how to use Microsoft PowerPoint when I was eight.

At my internship this summer, my older colleagues were impressed with my ability to quickly manipulate programs like PowerPoint. Those same individuals have Internet Explorer set up as their default browser.

For my generation, though, when we see a requirement on a job application like, “Must be proficient in Microsoft Office Suite,” we laugh because the employer might as well have said something like, “Must know how to read.”

So, my fellow young people, we have a talent many boomers do not possess, and that is fluency in the use of an internet browser and a trackpad. I don’t mean to rag on the older folks out there, but, let’s be real, we’re about ten times faster than they are.

I urge you to use that talent not by ranting on Twitter, not just by voting, but by literally fighting voter suppression by operating the laptop at a polling place. It’s a simple thing to ask, but it could make a world of difference to voters in your community.

In Champaign County, after participating in four hours of training (virtually, this year, so all the more reason for young people to sign up) and judging on the day, you’ll get paid $200 and have something interesting for your resume.

All you political science majors, all you people who take to Facebook to write dissertations about your political opinions, I beg of you, stop your bellyaching and instead be part of the solution. If you care about politics, if you care about our country and the democratic process, and you are also average at computers, you should be an election judge.

Do something about it. Step up and make a difference.

Ellen is a senior in LAS.