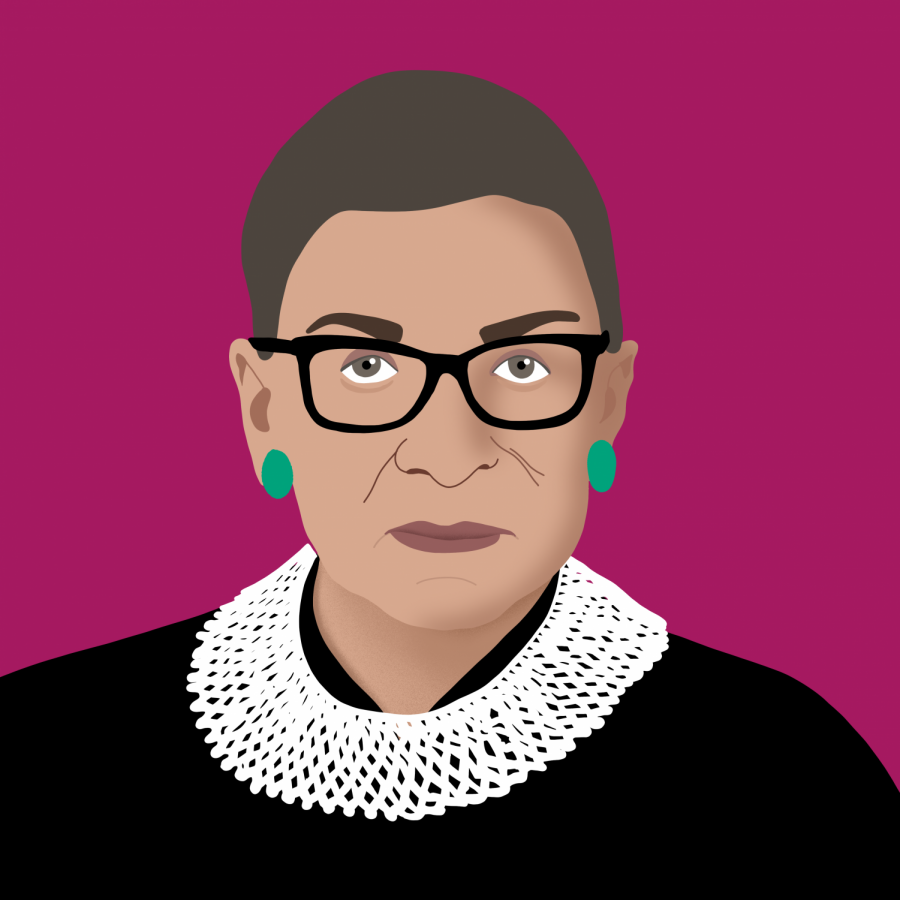 By The Daily Illini Editorial Board
September 24, 2020

There are said to be five stages of grief, the last being acceptance. In 2020, everyone has barely been able to suffer through three stages before restarting the process as a result of another horrifying loss.

Unfortunately today, we grieve again in 2020. Regretfully, we lament the loss of the most prolific advocate for women’s rights in over a generation and the second woman ever to serve on the United States Supreme Court, the indefatigable and principled Ruth Bader-Ginsburg.

Justice Ginsburg, indelibly remembered as the “Notorious RBG,” dedicated her life fighting for a society in which men and women were truly equal under the law. The feminist icon worked with the American Civil Liberties Union much of her life to prove sex-based discrimination existed in the law and was unconstitutional.

Justice Ginsburg would be appointed to a federal Court of Appeals by President Jimmy Carter and promoted to the Supreme Court of the United States by President Bill Clinton.

On the Supreme Court, Justice Ginsburg would gain her nickname for her scathing dissenting opinions. She famously authored dissenting opinions to Bush v. Gore, whose majority opinion is retroactively regarded as one of the worst Supreme Court decisions in the court’s history, and Shelby County v. Holder, whose majority opinion invalidated a critical part of the Voting Rights Act of 1965.

Many of her famous decisions regarded, of course, gender equality, such as her decision in United States v. Virginia, which declared the Virginia Military Institute’s male-only admission policy unconstitutional.

But beyond her judicial record and advocacy for women’s rights, RBG served as an inspiration and role model for all, not just feminist activists. RBG’s friendship with the late Justice Antonin Scalia, a staunchly conservative SCOTUS justice, represented the ability to have relationships that transcended politics. She frequently kept in shape through her rigorous workout routines, famously strenuous for someone in their eighties.

Unfortunately, with her passing comes the intensely political gravitas of the court’s fresh vacancy. Minutes after the announcement of her departure, rumors of when her vacancy would be filled swirled.

RBG’s legacy is one championing fairness, rectitude and consistency. For that reason, regarding the vacancy, it is the opinion of The Daily Illini that a lame-duck president is still a sitting president, but given that — by that logic — President Trump was able to steal Justice Scalia’s seat from President Obama and have Justice Gorsuch confirmed, he should not be afforded the luxury of filling RBG’s seat until after the election results have been certified this November.

Republicans have maintained that it is different since the Senate and White House are now run by the same party, but Constitutional responsibilities have never hinged on one’s party affiliation. Furthermore, when one considers that the structure of the Senate makes it more likely to be controlled by Republicans, this argument is clearly more convenient than reasonable. But this is simply arguing that only the Senate majority has the unilateral power to dictate when vacancies are filled.

Anyone who truly believes that Obama’s nominee, Merrick Garland, was undeserving of a Senate hearing and confirmation vote for a year before the election but that RBG’s vacancy must be filled a month before an election should simply say the quiet part out loud: he or she is not motivated by principles but rather guided by the prospect of partisan victories.

Perhaps there is less shame in owning up to prioritizing party over principles than in lying about it.

Furthermore, President Trump’s recently released shortlist of SCOTUS nominees is overflowing with less-than-qualified conservative ideologues rather than impartial, highly-respected judges. It is said that justice is blind, something RBG worked tirelessly to ascertain, but this ideal would prove an illusion by the confirmation of one of these nominees.

It is shameful to honor the legacy of a prominent feminist icon by replacing her court vacancy with someone whose sole purpose for being appointed is to strike down Roe v. Wade, which protected a woman’s right to an abortion in the first trimester.

Notwithstanding one’s political beliefs, the work and dedication of Justice Ginsburg are admirable. The inspiration she offered to an entire generation of women as well as the importance of the legacy she leaves behind cannot be understated.

With so much on the line this November, let’s uphold her penchant for political participation and turn out to vote in this election. Hopefully, hers will be the last tragic loss we have to lament this year.

A lifetime spent forging a legacy of egalitarianism and emancipation from socially-defined gender roles will not be in vain. We’ll miss her dissents, her outstanding record fighting for gender equality and, of course, her undying will present in every aspect of her life, from the courtroom to the weight room.