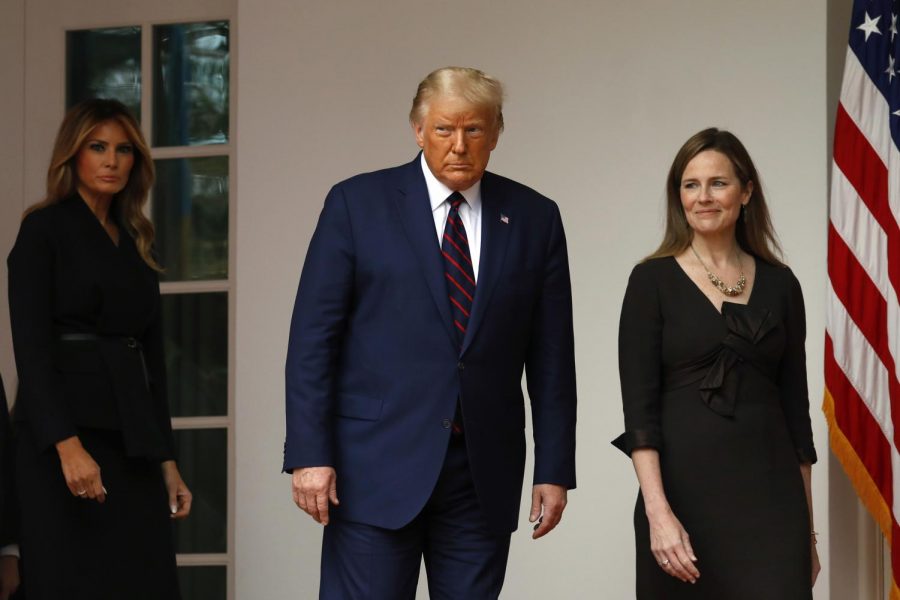 President Donald Trump, along with first lady Melania Trump, arrive to introduce Judge Amy Coney Barrett as his Supreme Court Associate Justice nominee in the Rose Garden of the White House in Washington, D.C., on Saturday,

As Scalia’s former protégé, Judge Amy Coney Barrett, reenters public scrutiny for her Supreme Court nomination, the role of her Catholic faith in her jurisprudence is prone to be scrupulously examined by the Senate Judiciary Committee.

During the 2017 hearing for Barrett’s appointment to the Seventh Circuit Court of Appeals, Senator Dianne Feinstein asserted to Barrett “the dogma lives loudly within you, and that’s of concern.” While the Constitution explicitly prohibits religious litmus tests for judges in Article VI, it is certainly fair to consider a judge’s beliefs in the context of their judging.

Elizabeth Bruenig of The New York Times contends Barrett, by no fault of her own, has publicly reopened the conflict “between Catholicism and the American ethos.” This conflict refers to the Lockean distinction of civic and religious life, informally the separation of church and state, and how Catholics may struggle to perform their civic duties independently of the teachings of the Church.

These concerns could be valid in the context of jurisprudence only if an individual judge demonstrates such behavior. To assume that religious judges are incapable of grounding their work in the rule of law rather than theology is a dual-loyalty smear historically rooted in anti-Catholicism and anti-Semitism. Such thinking has no place in a liberal democracy which values religious freedom.

Multiple outlets have already attacked Barrett’s piety due to her connection with the Christian group People of Praise.

Newsweek and Reuters had to correct false claims that the group was the direct inspiration for “The Handmaid’s Tale,” a book and television show depicting a dystopian patriarchy which has become a symbol synonymous with radical feminism. Left-wing groups and outlets such as The Guardian have painted her as “Trump’s anti-abortion Supreme Court nominee” due to her faith.

This mudslinging is shameless and deliberately ignores Barrett’s dedication to honest jurisprudence. Barrett co-authored a 1998 article in Marquette Law Review about Catholic judges and capital punishment cases, which insisted “Judges cannot — nor should they try to — align our legal system with the Church’s moral teaching whenever the two diverge.” The God vs. Caesar conflict requires “the recusal of judges whose convictions keep them from doing their job.”

Further, in her speech following the announcement of her nomination by the President, Barrett emphasized that “judges are not policy makers, and they must be resolute in setting aside any policy views they might hold.” If her position is not trite enough, under oath before the Senate Judiciary Committee Barrett said “I would recuse. I would never impose my own personal convictions upon the law” when asked how she would handle a conflict between her piety and judgeship.

It is worth noting that Barrett would become the sixth sitting Catholic Justice on the Court alongside Roberts, Thomas, Alito, Sotomayor and Kavanaugh.

Justice Sotomayor most notably breaks from the others in her judicial philosophy. Since her appointment in 2009, her opinions in cases such as Whole Woman’s Health v. Hellerstedt and the recent Little Sisters of the Poor v. Pennsylvania have demonstrated a willingness and capability of justices to oppose the wishes of the Catholic church in cases concerning abortion and contraception despite their faith.

It is in the character of originalists like Barrett to hold great reverence to the objective meaning of the law rather than instill their own personal views. We must grant good faith, to those of faith, that they will judge fairly when they indicate so. In virtue of the great reverence she expresses for her mentor Scalia, Barrett surely has learned from him that alike there is no Catholic way to make a hamburger, there is no Catholic way to interpret the law but honestly and perfectly.