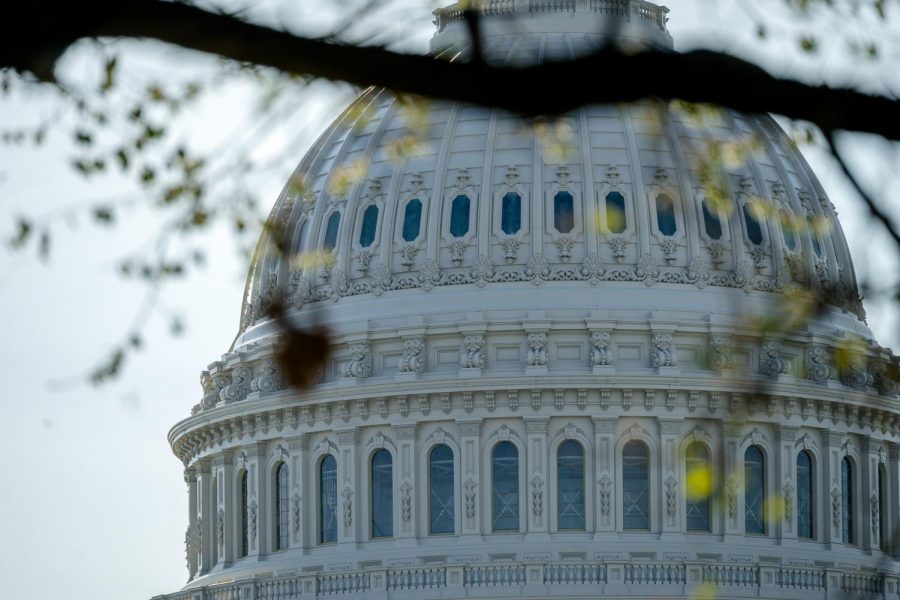 The top of the U.S. Congress Building peaks through the leaves of a tree. Columnist Nathaniel argues the filibuster should be abolished.

Although the filibuster and its supporters contend that the procedure prevents majoritarian rule over the United States, the Senate procedure today has devolved into becoming a tool in the arsenal of minoritarian rule.

The filibuster is an outdated Senate procedure, and if the next administration — assuming Joe Biden wins the election — has any appetite in advancing American development, the filibuster must be abolished.

Never mentioned in the Constitution, the filibuster was born in 1806 when the Senate — heeding Vice President Aaron Burr’s advice to have “unlimited debate” — removed an infrequently used motion which opened a loophole for the filibuster to fill. It was not until the 1850s where the filibuster would gain traction, and even then it would not garner its dreadful power until the mid-20th century.

The filibuster encountered its first reform in 1917 on the behest of President Woodrow Wilson. Wilson at the time critiqued the Senate suffering from filibusters as, “the only legislative body in the world which cannot act when its majority is ready for action.” In looking to bar a filibustered bill that authorized U.S. participation in World War I, Wilson sought the creation of the cloture vote: a ⅔ supermajority vote to end debate and move to actual voting procedures.

Woodrow’s cloture vote was successful in limiting unnecessary debating on bills but was no match for furious southern senators during the Civil Rights era who took the filibuster and transformed it into the deep-freezing bomb it is today.

The Senate’s longest individual filibuster was led by South Carolina’s J. Storm Thurmond amidst the debate regarding the Civil Rights Act of 1957. Thurmond continuously filibustered for more than 24 hours and previously in life claimed that any civil rights act would be a presidential power grab alleging the 1957 Act was composed of “damnable proposals.”

Ultimately the filibuster forced compromise between the warring senators and the 1957 Act was therein stripped of its most effective features. Here, the filibuster served its purpose in forcing politicians to compromise on an issue. However, it must be noted that said compromise is exclusively beneficial for political interests and compromising on urgent bills translates to the Senate failing to provide for the general well being of the American people.

Thurmond was not alone in weaponizing the filibuster as a tool of southern bitterness against civil rights. Before the monumental passage of the Civil Rights Act of 1964, the Senate was fearfully occupied by a 60 working-day filibuster. In a relay of racism, southern senators blocked social and judicial equality for underrepresented and over-persecuted Americans with the filibuster as their weapon of choice.

Amidst the tumultuous battle to end the southern-led filibuster, reporters in 1964 called this skirmish the “last gasp” for the filibuster. The ‘64 Act notably was also the first of 11 previous civil rights bills to bypass the fatal cloture vote.

Nothing has changed with the filibuster and its weaponized status since 1975, where the last reform was lowering the cloture vote from a ⅔ supermajority to a ⅗ majority vote.

Today, the use of filibusters has reached all-time highs — to the point that the Senate invoked cloture more than 250 times just between 2013-2014.

Ending the filibuster should not be a partisan issue. Voices from both sides of the aisle, ranging from President Donald Trump to Senator Elizabeth Warren, have called for dumping the filibuster. The Senate’s failure to effectively legislate the nation has even prompted President Barack Obama to call for its abolition.

Adding an even greater voice, potential next president Joe Biden is also sending his signal of support in terminating the filibuster.

The Senate’s purpose is to debate and pass laws, yet under the current temptation of the filibuster, the Senate now acts as an eternal battleground for debate where both sides opt to fight and provide inferior compromises.

Vox journalist Ezra Klein depicts the filibuster best when illustrating it as “legislative paralysis.” In having a crucial part of the government paralyzed from filibusters, one cannot fathom a future wherein bills hoping to answer society’s biggest questions on medicare, climate change, gun safety and education can even clear the Senate.

With nixing the filibuster, gone is the fear of a debilitating compromise that, through bureaucratic funneling, strips powerful bills of their efficacy and limits them to mere word-jargons on fancy documents.

The solution here is simple: abolish the filibuster. Without the threat of a filibuster, a Senate majority can no longer excuse themselves in failing to present full-fledged bills to the American people. In addition, the power is reintroduced back to the American vote on whether to continue supporting said majority or to give the minority a chance to win power and present their legislative vision.

In order to overcome this obstacle before the American public, it will require a new path forward in hopes of building American democracy a stronger foundation than it has seldom had. Ditching the filibuster is not the end of every problem in Washington, but it unquestionably renders fewer roadblocks and hurdles to cross in legislating further American progress.