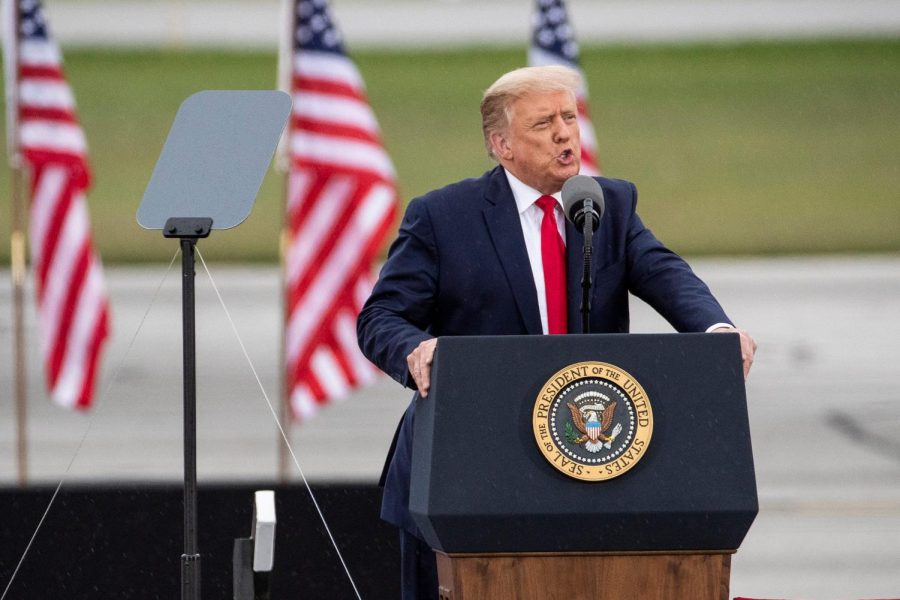 President Donald Trump speaks during a rally at the MBS International Airport in Freeland, Michigan on Sept. 10. Columnist Nick urges citizens to remember that divisiveness will live on even after Trump leaves office.

The Trump administration can only be characterized as inexperienced, scandalous, authoritarian and untrustworthy. The president himself has misled or lied to the American public over 20,000 times during his presidential tenure. He has acknowledged making a mistake or taken responsibility zero times. Gone are the days of Harry Truman’s “the buck stops here.”

With the presidential election around the corner, one should remember what is at stake.  Four years is a long time, and the electorate has a short memory. Although the president didn’t fulfill many campaign promises made, he was certainly able to inflict quite a bit of damage while in office.

Unpopular policy choices that would perpetually haunt any other administration just provided outrage to the public until the next scandal consumed the media cycle.

By now, many voters have forgotten this is the same administration responsible for the “Muslim ban,” repealing net neutrality, implementing a ban on transgender personnel in the military and lowering emission standards. It is the administration that used the Children’s Health Insurance Program as a bargaining chip to get funding for the border wall.

The president easily usurped the title of “Teflon president” from Ronald Reagan because despite how many scandals the president has had, his support never fell dramatically below 37%. He ordered violence against protestors in Lafayette Square, disparaged the U.S. in Helsinki while standing next to Vladimir Putin, was responsible for “Sharpiegate” and is somehow still in office after his family separation policy at the U.S.-Mexico border.

Regarding landmark legislation, the administration did some good, such as the United States-Mexico-Canada Agreement or the First Step Act, some bad, like the Tax Cuts and Jobs Act, and passed up a lot of opportunities. Under President Donald Trump’s leadership, there was no large infrastructure bill or health care reform as promised.

The Trump administration has focused on dismantling current institutions rather than building them up. The president filled many departments and agencies with heads who opposed the very existence of the agency they now lead. He radically reduced funding for diplomatic bodies like the United Nations, NATO and the World Trade Organization. The U.S. withdrew from the World Health Organization and the Paris Climate Accords under this administration.

Similarly, Trump’s brand of politics would often shake the faith of the public in the legitimacy of American institutions. He called the media — a vital linkage institution — “the enemy of the people,” undermined the intelligence agencies, criticized military generals and even accused his own Department of Justice of being compromised by the “Deep State.”

The administration constantly undermined the law — innumerable Hatch Act violations, obstruction of federal investigations and, according to the Government Accountability Office, a breach in law that would rightfully lead to the president’s impeachment. The lines between governance and campaigning were often blurred, which can only lead to abuse of one’s office.

The Trump administration’s legacy will undoubtedly be the record number of judges confirmed in four years. After Mitch McConnell held up vacancies in over 100 judicial openings during the last year of Barack Obama’s presidency, the Trump administration was able to ram through justices that were always conservative and young but often unqualified. Three Supreme Court Justices will have been confirmed by the time of the election.

Trump’s supporters would contend that he has “corrected” the judiciary to reflect that of a “center-right country,” except that  polls have consistently shown the U.S. has not been center-right, and is becoming increasingly less so every year. Voter identification and polls gauging support on the issues emphatically confirm the country has leaned center-left and responds to Republican polarization by traveling further to the left.

Therefore, the installation of young judges that will bend the judicial branch to the right for an entire generation seems like a desperate attempt to stick an increasingly left country with a system hostile to change.

The administration seemed to be governed by no principles except resolute sycophancy for Trump. The party often followed suit. Perhaps some Republicans would be redeemable and endorsable in this election cycle if — even once — they had told the emperor that he had no clothes. But from all but a few Republicans, radio silence seemed to accompany every scandal. Occasionally, a vulnerable senator would assert they were “deeply concerned.”

There’s little doubt Trump is a racist. One has to look no farther than birtherism, a movement he orchestrated, to see that. But this is also the man who called for the death penalty for the Central Park Five, called Haiti and African nations “s—hole countries,” called Mexicans “rapists and killers” and has persistently pandered to white supremacists and right-wing hate groups.

His foreign policy was abysmal. He engaged the U.S. in a trade war with China, abandoned the allied Kurds in Syria, murdered an Iranian general — nearly provoking a war — and failed to defend U.S. allies.

His record responding to crises was not much better. The administration tended to botch its handling of crises, such as wildfires, hurricanes, the COVID-19 pandemic and mass protests against police brutality. The American public witnessed the longest government shutdown in the country’s history.

Much of the inadequate disaster aid can be linked to the president’s affinity to disregard science. He is not a believer in man-made climate change and suggested forest fires are caused by a lack of raking.

Truly appreciating all of the administration’s failings is a daunting task. For every scandal, there are dozens of distasteful tweets and unfiltered, offensive remarks spewed from the president’s mouth. His brand of politics is one that must go extinct the moment he is banished from the White House.

It will take a generation to undo the harm the president has imposed the last four years, but it must start on Jan. 20. He cannot be given another term. It is imperative for the sake of maintaining order and democracy that he lose his bid for re-election on Nov. 3.

Andrew is a junior in LAS and the Opinions Desk Editor for The Daily Illini.