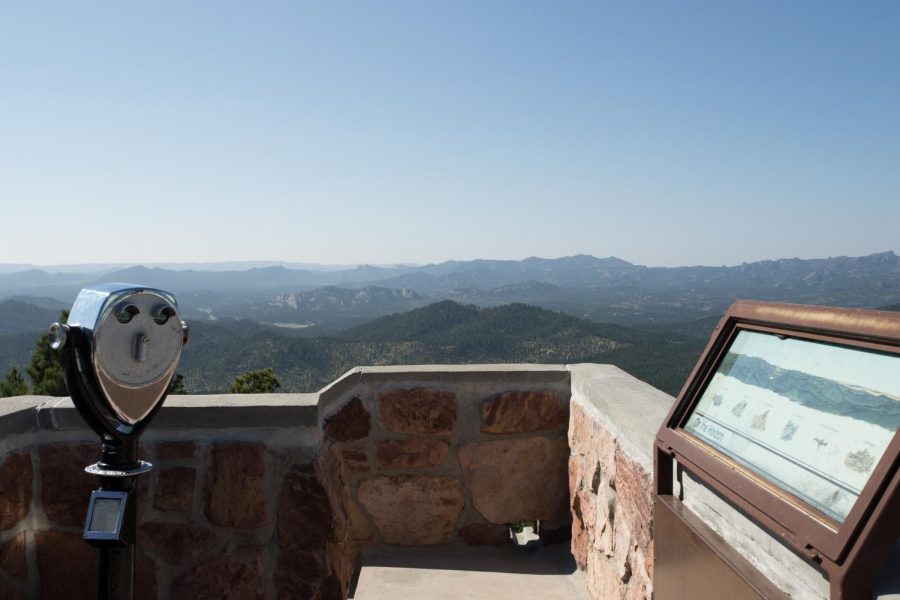 Picture above is a view of the Black Hills atop Mt. Cooldige in South Dakota. Columnist Nathanial recounts his time in Kadoka, South Dakota and speaks on the persitence and resonance of the American spirit.

The American spirit demonstrated itself 117 miles east of Mount Rushmore and 743 miles west of Rockford, Illinois.

In a town of 708, Kadoka, South Dakota was personally a reservoir for the endearing American spirit this past summer.

Established in 1906, the town’s name originates from the Native American word for “Hodoka,” translating to “hole in the wall” — an appropriate name for Kadoka as the town lies as the gateway to one of America’s natural wonders: the Badlands.

Kadoka found its original trade-in serving as a cattle train depot — a venture that lasted until 1980. The town still survives today, and rather than serving as a connection for cattle, Kadoka specializes in networking fearlessness to any and all travelers before it.

This summer, my friend Grace and I found ourselves under the sway of an 11th-hour Manifest Destiny. With a week and a half of planning, we were determined to visit our friends working in Montana and ventured West: a trip consisting of more than 3,700 miles.

Joking along the way that fate was too fortunate for us, our luck subsequently ran amok about 117 miles east of our hotel that first day of pioneering. Gathered along the highway on a simmering July afternoon, fate found us in the form of witnessing a harrowing motorcycle accident.

Following our western voyage were scattered motorcyclists migrating to Sturgis for the yearly motorcycle rally; luckily for Grace and I, we found ourselves traveling a week ahead of the typically clogged transit — therefore avoiding the worst of the motorcyclists on the 80 mph speed limit freeways west of Sioux Falls, South Dakota.

There, in front of the Buick Grace and I drove, rose anguish and fear when suddenly a motorcycle in front of us swerve, flip and deliver its two passengers soaring onto the sides of the highway. Shock-ridden, Grace immediately pulled over, and I called the cops while numerous cars swiftly passed by only shaking their heads at the alarming scene.

Only a few seconds after Grace and my diversion off the highway were we followed by a dashing woman who whirled her minivan across the medium trench and rapidly took charge in the recovery effort.

As I stayed on the phone with local police, a scene akin to a small-South Dakotan-town-version of The Avengers assembled onto the scene in which Grace and I would later learn to be various townspeople of Kadoka, South Dakota.

The American spirit asserts itself in times of personal and societal crises. It manifests itself in our trials and tribulations: when we are under attack and when fear looms in the mind of its people. Through tumultuous events such as Pearl Harbor, the Cold War and 9/11, the American spirit was united against a common enemy.

Today, where our common enemy is our common neighbor, it is too easy to weigh judgment against fellow Americans over bureaucratic apprehensions. Yet also in this time, it is easy to forget the things that unite all of us are the smaller moments of cooperation that can materialize frantically.

There was more that united than divided us on the South Dakotan highway that day. The Arkansan motorcyclist couple who lay aching on the highway shoulder were surrounded by South Dakotans and us two Illinoisans who sought good company and patiently waited for help to arrive.

Fortunately, on that heated highway, the good company that surrounded this motorcyclist couple was predominantly from the town next door, Kadoka. The minivan mom who originally skirted across the highway turned out not only to be the related to the owner of the ranch where we found ourselves to be but also was the town’s previous teacher, related to the LifeLine helicopter pilot and the sister of a gas station owner down the road and across from the Badlands.

The American spirit appears only when needed and on its own time. Indeed this minivan-clad knight channeled the American spirit as she remained the calm, leading force in supporting the injured motorcyclists and stunned Grace and me.

Huddled along the highway once the paramedics had arrived, Grace and I found ourselves to be adopted-citizens of Kadoka through trading stories and traveling experiences that crucial day. Likewise, Grace and I saw ourselves refitted to serve as the shade for the motorcyclist wife while the minivan-mom in front of us led a group discussion over family and children to keep spirits high.

President Harry S. Truman outlines the nobleness of the American spirit when he said, “America was not built on fear. America was built on courage, on imagination and unbeatable determination … ”

Facing us that afternoon was a decrepit fear of the unknown: a blank itinerary as to what would happen to the injured couple and an increasingly precarious expedition for Grace and me that started merely hours before.

Nonetheless, the American spirit supplied us in the accident’s occurrence the courage and “unbeatable determination” for resolve that Truman aptly discerned.

There were no discussions of economics, health nor foreign policy on the offbeat highway in Kadoka. Following the motorcyclists’ misfortunes, only topics of family and local chatter were the affairs of interest. Even while their bodies maintained troublesome harm could the husband and wife still bid jokes at their distressing situation — and there could the American spirit find solace.

The American spirit cannot be confined into a single definition, but it can be applied to assorted situations across the American spectrum. For a pair of teens who were swept into a recovery effort in Kadoka, the American spirit demonstrated its resolve through challenging fear with camaraderie and uniting us with new companions more than 700 miles away from our home.